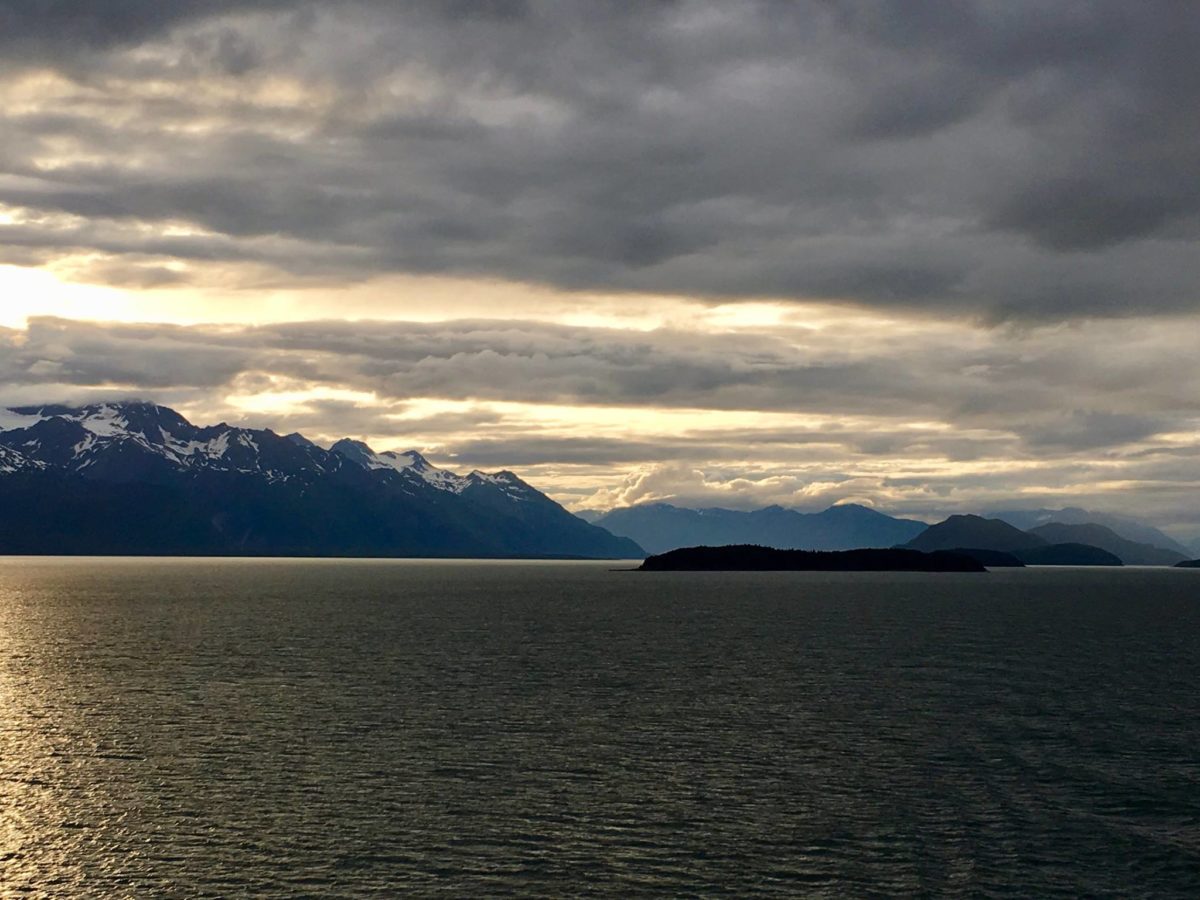 Alaska: The Failure of Words is the Beginning of Truth

Four-hundred-year-old ice fell into the sea. A crack like thunder preceded the calving. Then shards of ice cascaded down the face of the glacier and crashed into Disenchantment Bay, Alaska.

The largest calving glacier in North America, Hubbard is advancing into the ocean. This slow march into the water didn’t seem particularly spectacular to me until I saw it. Now, I understand.

The night before, my husband and I had sipped red wine while sitting on the uppermost deck of the cruise ship. We watched mountain glaciers, like starched shirt fronts between the brown and green shoulders of enormous mountains, slip by. The summer solstice mocked the night, refusing the approaching darkness, no matter how late the hour. I thought that night had given me all I needed to know of the wonders of Alaska. But I was wrong.

Tempted to avoid the chill and the crowds of other cruisers gathered at the deck rails at the bow of the ship, I almost missed seeing Hubbard the next day. But the knowledge that I might never be back to see a glacier up close drove me to bear witness. I bundled up, made sure I had gloves, hat, and scarf for a June encounter with a seven-mile-wide ancient ice cube and joined the ranks of spectators.

I can’t define for you how it felt to be that close to history. Over the loudspeaker, we heard a gentleman tell the passengers how the native people of Alaska thought of the glacier as a living thing. They refused to speak in its presence. They felt it could interfere with their lives if they disrespected it. The rumbles of “white thunder” punctuated their lives as the glacier shed triangles of ice into the water and detached even larger and more dangerous sections below the water.

I’m a writer, so I want the words I write to help you feel the chill in the air and the jostling of bodies along the decks as fellow travelers snap hundreds, maybe thousands, of pictures. I want you to witness in your mind’s eye the milky chalk-color of the water where the glacier lives. Obscene in its beauty and its total disregard for anything smaller, or less magnificent than itself, the glacier makes its inexorable advance into the sea. Though artists want to transmit beauty–and often do–we can only evoke imagination or memory. Said another way, we offer the warm, sweet smell of chocolate cake, but not the cake itself.

Maybe these words hint of truth about the glacier or about the nature of its beauty, and the wonder of experience. I hope they do. But, I want more than that for you, and for me.

“Truth,” says Father Anthony De Mello, psychologist and Jesuit priest,”is never expressed in words. Truth is sighted suddenly, as a result of a certain attitude.” Father De Mello didn’t mean sighted with the eyes. He meant, sighted with the heart–experienced outside of the limiting context of words, pictures, or any other medium. The wonders of art and imagination, or the magnificence of nature hint at truth. But a representation can never be the thing itself.

To sight the truth requires a willingness to experience everything, to pay attention and gently challenge what we thought we knew before. The smells, the tastes . . . to eat the thing, and see the thing, and wonder about it, too. The glacier can’t tell me how to live, it offers no advice. It gives me what I accept from it. And I can’t tell you what that is. I sighted truth. I stood in awe.

Unfortunately, neither I, nor many others much smarter and wiser than me, can offer the experience of truth itself. However, I can offer a few thoughts on preparing to receive truth from our experiences. Such simple things–as simple as waking up and deciding we haven’t seen it all yet–transform us if we let them.

Here’s a Few Ideas to Try:

Pay attention–the smallest shift in a thing you thought you knew can change everything. Find pleasure in the tiniest things. The way a ripe nectarine smells. Or the soft velvet on the underside of a maple leaf. Do stuff–accept invitations. Go on trips. Watch a new play. Listen to music. Gaze at the stars for no particular reason at all. Observe yourself–ask yourself why you’re thinking or feeling something and truly want to know the answer. Listen to people–not only their words, but what might be behind them. Spend the time to look in another person’s eyes and focus on nothing but giving your full attention. You’ll hear more than the words.

About the author: Angela Noel Lawson is on a quest to become a better human. She write about parenting, leadership, and personal development, telling her stories so you can find yours. She lives and writes in Minneapolis, Minnesota with her second-husband, young son, and elderly golden retriever, Ace. Follow her on twitter @angiewrite.

A version of this article originally appeared on the blog You are Awesome.