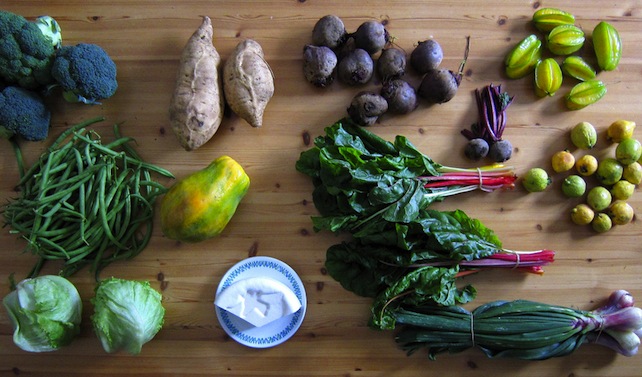 In a recent issue of the Barilla Center for Food & Nutrition’s periodical BCFN Magazine, titled Food for Health: Paradoxes of Food and Healthy Lifestyles in a Changing Society, Food Tank co-founder Ellen Gustafson observed that the Western diet has taken over the world in the past 30 years ““ and the results have been disastrous. Global obesity rates have doubled, pushing the growth of diet-related illnesses such as diabetes, hypertension, and heart disease.

The bad health effects of this diet, high in refined sugars and fats and full of processed grains, have been observed worldwide. In an article series for Food Tank, the organization Brighter Green has written about the public health problems caused by the increasing availability of high-calorie, low-nutrient fast food in Mexico, China, and South Africa.

Unfortunately, traditional diets and indigenous crops that have reliably fed communities for centuries across the world are rapidly being replaced by unhealthy foods.

The U.N. Food and Agriculture Organization reports that approximately 75 percent of the Earth’s genetic resources are now extinct, and another third of plant biodiversity is predicted to disappear by the year 2050.

But initiatives like the World Vegetable Center (AVRDC)’s Vegetable Genetic Resources System and Slow Food International’s Ark of Taste are working to catalogue indigenous species of fruits and vegetables all over the world.

With the help of these incredible resources, Food Tank has compiled a list of 25 indigenous fruits and vegetables from regions around the world.

1. Amaranth: This versatile plant, which grows quickly in the humid lowlands of Africa, is a leafy vegetable typically consumed in places like Togo, Liberia, Guinea, Benin, and Sierra Leone. The plant thrives in hot weather and is an excellent source of protein, vitamins, and essential minerals, including calcium, iron, magnesium, potassium, and zinc.

2. Cowpea: Originating in central Africa, this legume is one of the region’s oldest crops. It is also drought resistant and can thrive in poor soil conditions. In addition to the peas, the leaves of the plant are also consumed as a vegetable.

3. Spider Plant: This green leafy vegetable, also known as “African Cabbage,” can flourish throughout Africa. It is high in protein, antioxidants, vitamins, and micronutrients.

4. African Eggplant: The plant is an important indigenous crop because it is high yielding, drought-resistant, stores well, and can be grown in poor soil. The leaves of the eggplant are also consumed, and it can represent an important income source for some families.

5. Argan: This tree, native to the southern coast of Morocco, produces fruit containing a valuable hard nut. This nut contains seeds which produce a deep yellow oil with an unmistakable, rich flavor. In Morocco, there are a number of women’s cooperatives dedicated to producing argan oil.

6. Perinaldo Artichokes: This popular thistle vegetable, valued for its tasty center, is native to the Mediterranean region and originally cultivated in ancient Greece. Perinaldo, a small Italian town near the French border, produces a variety of artichoke lacking spines or a choke and violet in color. The edible flower bud is a good source of fiber, vitamin C, folic acid, and various minerals. This variety of artichoke is drought resistant and very hardy.

7. Formby Asparagus: Formby asparagus is notable for its coloration: white base, green stem, and purple-tinged tip. The vegetable is rich in protein, fiber, vitamin B6, calcium, magnesium, and zinc. It is a valuable addition to any diet because it aids in protein synthesis, reduces calcium loss, and has antioxidant properties.

8. Filder Pointed Cabbage: The cruciferous vegetable  provides a rich source of beta-carotene, vitamins C and K, fiber, and it serves as an antioxidant and anti-inflammatory. Cabbage can be stored cold for months at a time and is eaten in the dead of winter when other vegetables are dormant.

9. MÃ¥lselvnepe Turnip: This hardy, root vegetable variety has been improved over the years through selective cultivation in Norway. It has an excellent, yet strong and distinct taste compared to other turnip varieties. It can be eaten raw, roasted, baked, boiled, and is frequently used to enhance the flavor of soups, salads, stir frys, and side dishes. The turnip is an excellent source of vitamin C and potassium.

10. Ermelo Orange: Produced in the town of Ermelo in northern Portugal, these medium-sized oranges are extremely sweet and juicy. Ermelo oranges are distinctive because they have a thin rind and are less fibrous. The fruit is grown on small plots of land overlooking Lima River and pesticides, insecticides, and chemical fertilizers are forbidden in the region.

11. Bitter Melon:  Despite its distinctive appearance and bitter taste, this vegetable, originally from the Indian subcontinent, is popular in a number of Asian countries. Those who overlook the vegetable’s warty appearance can benefit in a number of ways from eating this plant. The gourd has cancer-fighting properties, helps cure diabetes, and can help cleanse the body of toxins.

12. Pamir Mulberry: The Gorno-Badakhshan province of Tajikistan has a mountainous terrain ill-suited for the production of typical grains, including wheat and barley. The Pamir Mulberry grows well in this environment and is an important food source during times of crises. The berries can be eaten raw, dried, whole, ground, or as a jam.

13. Okra: The edible green seed pods of this plant are a common ingredient in soups and sauces and popular in Indian and Pakistani cuisine. Okra is also an important export crop in the Philippines, Thailand, Malaysia and Vietnam. The vegetable is a rich source of vitamins and minerals and the seeds provide quality oil and protein.

14. Mungbean: The mungbean is important in Asian diets and valuable for its easily digestible protein. High levels of iron in the vegetable help improve the diets of the most vulnerable women and children, and mung bean production offers an opportunity for increased income for small-scale farmers. In addition, the vegetable can fix nitrogen in the soil, making it a valuable for crop rotations.

15. Lemongrass: This valuable herb is used in many Asian countries, including India, Sri Lanka, Thailand, Vietnamese, Malaysia, Cambodia, and Indonesia. Lemongrass possesses many minerals and essential vitamins, which help control blood pressure and prevent heart disease. It is also valuable for its essential oils, which are known to possess anti-microbial, anti-fungal, antioxidant, and anti-septic properties.

16. Lifou Island Yam: This starchy tuber plays an important role in both nutrition and food security in many Pacific Island nations. The vegetable is also very versatile–it can be roasted, fried, grilled, boiled, smoked, or grated. Yams are important because they can be stored for long period of time and the vegetable has a social and cultural significance on many islands.

Take the Ride: A Comprehensive Guide to Bike Touring

17. Bunya Nut: Bunya nuts have long been a prominent food in the culture of Australian Aboriginals – so much so that, prior to European settlement, Aboriginal tribes would travel long distances to attend festivals celebrating the Bunya season. The Bunya nut is similar to the chestnut both in appearance and taste. The nuts grow on enormous Bunya pines in the few rainforest regions on the continent, but these trees are increasingly less commonly found.

18. Kumara: Also known as the sweet potato, kumara is cultivated in many Pacific Islands and was a staple crop for hundreds of years.  The vegetable is a great source of protein, vitamins A and C, iron, calcium, and dietary fiber.

19. Perry Pear: This formerly wild variety of pears are pressed for their juice. The pear juice is then transformed into a fermented alcoholic beverage. The perry pear was introduced into Australia by the English, but its production is still very limited, and many of the perry pear varieties are currently facing extinction. During the height of gold-mining in Australia, perry pears were used to make a safe low-alcohol beverage for miners.

20. Rourou (Taro Leaves): In a number of Pacific Island countries, such as Fiji, taro leaves are eaten and used in various cooking techniques. The leaves provide an excellent source of vitamins A and C. The leaves also have a social importance in ceremonial feasts and are a good local cash crop. In addition, the corms of the giant swamp taro plant have the potential to help feed a large number of pacific island countries.

21. YacÃ³n: Also known as the Peruvian Ground Apple, this root vegetable was cultivated throughout the Andes for more than a millennium. Because the vegetable consists mostly of water, it provides isolated inhabitants with a refreshing food resource. YacÃ³n also contains inulin, a low-calorie, high-fiber sweetener that aids digestion while inhibiting toxic bacteria.

22. Papalo: This popular herb, known for its strong skunk-like smell, is used in the American Southwest, Mexico, and South America. Papalo, typically eaten as a garnish, is valued for its medicinal properties, including regulating blood pressure, relieving stomach disorders, and addressing liver problems. This unique herb has a hardiness to heat, allowing it flourish in hot climates.

23. Hinkelhatz Pepper: The Hinkelhatz pepper has been cultivated by the Pennsylvania Dutch since the 1880s. The plant produces small, heart-shaped peppers with a red or yellow color. Hinkelhatz peppers have a stocky, spicy flavor, so they are frequently pickled or pureed into a pepper vinegar used as a food topping. The pepper is important because it is cold-tolerant, pest and disease-resistant, and a prolific producer.

24. Nova Scotia Gravenstein Apple: This variety of apple is an early-season favorite in Canada because it can be used for a host of different purposes. The flesh is tender and crisp, and the apple’s juice is sweet-tart and intense. The apple is eaten fresh, but is also great for cooking, makes a flavorful cider, and can be stored cold for months at a time.

25. Guayabo: The green fruit, native to Uruguay and southern Brazil, has an appealing sweet and sour taste. In addition to its balanced taste profile, the fruit provides excellent nutritional and medicinal value because of its superior mineral and antioxidant content. In Uruguay, the guayabo is readily adapted to shallow soil and a mountainous environment, allowing the fruit to thrive, even in the wild.