A Taste of Vietnam’s Mekong Delta 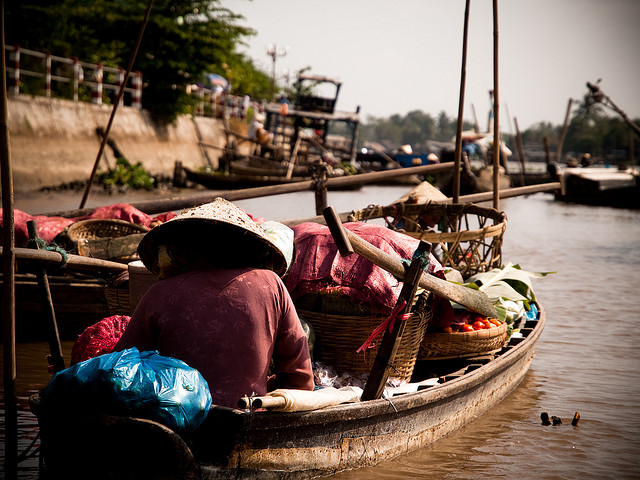 Thousands pass through HÃ  TiÃªn each year on buses bound for Saigon.  Few stop; and those who do rarely stay longer than the time it takes to climb from a cramped minibus into the ferry to PhÃº Quá»‘c Island. So except through bus windows, Westerners are a rare sight in this quiet corner where Cambodia’s southeast tip abuts a broad estuary”“”“the sinuous SÃ´ng Giang ThÃ nh spilling into the Gulf of Thailand”“”“at the western edge of the Mekong Delta.

Two men I met while crossing the border”“”“a doctor and a hotel designer, on their separate ways home”“”“invited me to eat with them when we arrived in downtown HÃ  TiÃªn. They ordered a communal feast of rice, pork, grilled fish, steamed veggies, and canh khá»• qua (stuffed bitter melon soup). They showed me how to mix the salt, pepper, spices, fish sauce, and lime in shallow dishes; what to dip where; which bowl was for rice and which for spitting bones into; and how to properly drink Saigon beer (cheers = yo!).

After etching my first impression of Vietnam with boisterous welcome and broken communication, they hopped on a northbound bus as it pulled away (I never saw it arrive), leaving me with wide grins and quick hearty handshakes. People move fast in this country.

I found and checked into my hotel, with directions and even a free lift from more friendly locals, and walked down to the statue-dotted promenade beside the river. Seeing the saffron and pale pink sunset, the rotund ramshackle junk boats, and a slow barge slipping across the muddy water, I reveled in the sudden closeness of the faraway.

As dusk seeped like ink into the streets, children poured out of houses and glided by on bikes shouting the only English they seemed to know (Hello! What your name?!).  An old man rose from tea to meet me in the street, converse haltingly a moment, offer advice, and discover my origins to report back to his friends”“”“who had paused their game of Xiangqi to watch. Around every corner I found another line of food carts selling crisp vegetable pastries, meat-and-egg stuffed steamed buns (called bÃ¡nh bao), baguette sandwiches (bÃ¡nh mÃ¬), and deep-fried bananas at the curbside.  Everyone waived. 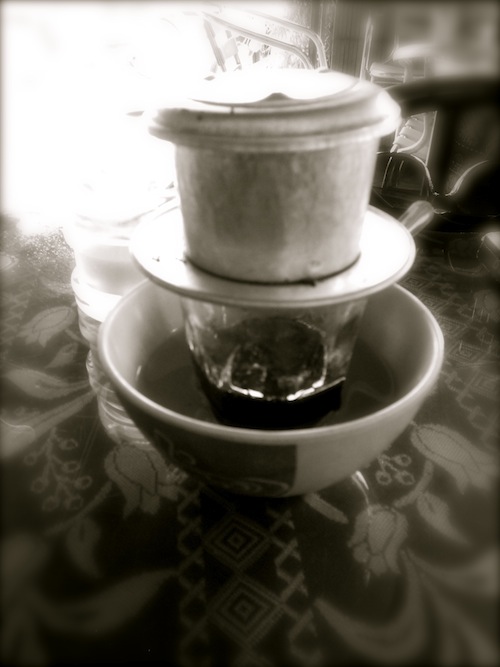 In the morning”“”“waking early to the national anthem spouting down from public loudspeakers”“”“I had my first cup of Vietnam’s incomparable coffee. Already a bit muddled by the language barrier, I was surprised when my café den nong (hot black coffee) arrived: dripping from a metal teacup-and-saucer contraption into a tumbler, which was warming in a half-inch of hot water in the bottom of a ceramic bowl. I later learned this covered aluminum cup, with holes in its base and a thin porous disk inside, is called a phin coffee filter”“”“a sort of gravity-powered single cup French press that is ubiquitous in Vietnam. It brews about 2-3 ounces. But the strength, richness, and cocoa notes of the coffee it makes are more than enough to satisfy even fastidious palates. Most locals, in fact, prefer to dilute the thick hot coffee by pouring it over ice in a tall glass, making something akin to a cold Americano, called café dÃ¡.

Once initiated into Vietnam’s coffee culture, it quickly becomes obvious everywhere. Three times a day”“”“mid-morning, mid-afternoon, and after dinner”“”“society pauses to fill cafes with dripping phin filters and animated conversation.

Even after an ill-planned overnight bus trip to Cáº§n ThÆ¡, which arrived hours before dawn, I had no trouble finding a coffeehouse to read and sip café den in until my hotel’s reception reopened. A sprawling riverside city 150km east of HÃ  TiÃªn, in the center of the Mekong’s alluvial plane and with a population topping 1.5 million, Cáº§n ThÆ¡ is famous for its iconic floating markets. Vietnam’s hefty car taxes and ownership fees, coupled with the massive many-fingered network of the Mekong Delta, make this area one of the last places in the world where floating markets still play a crucial role in the local economy.

Every morning before dawn, farmers from the surrounding countryside load narrow wooden boats and bulbous-hulled freighters with the recent harvest. Some traveling from as far off as Cambodia, they chug sputtering motors past broad lilies and lotus blooms, through shallow tributaries lined with bamboo houses, to the nearest market. They paint eyes on the bows of their boats. The arched Khmer vessels look toward the sky, while the low-lying local boats peer into their native silt-stained waters. But no matter where they come from”“”“tying produce like flags atop bamboo poles”“”“the farmers advertise where they are in the dense flotilla to help would-be buyers find them in the shifting mosaic of boats. 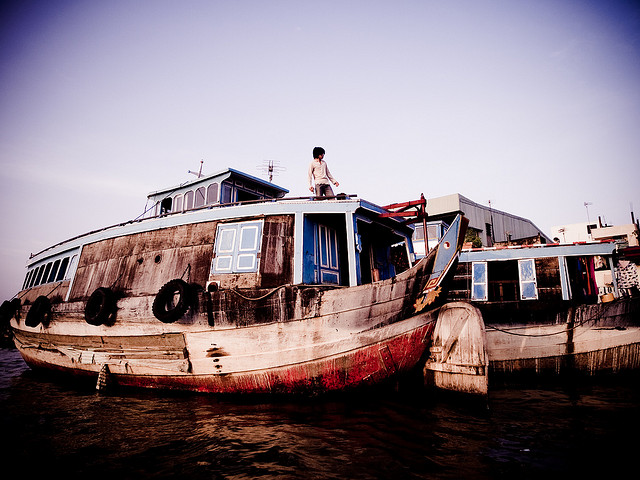 Like much in Vietnam, these markets start early. They are busiest from 4-6 a.m.  But because most boat operators won’t take tourists during peak hours (when the crowded canals are difficult to navigate), those hoping to see the height of the action should head to the docks before sunrise to bargain directly with local boatmen. By 8 a.m. (when the shiny tour boats arrive), most farmers have already returned to their fields, while the wholesalers are busy setting up shop in inner-city markets or selling to local produce stands.

As we puttered away from the CÃ¡i RÄƒng market that morning through the thinning agglutination of boats, I remembered the first sunset I had seen in HÃ  TiÃªn.  Looking out across the estuary and behind me at the bantering pajama-clad women with their woks and food carts, I thought what a calm, languorous place I had found. I watched their deft hands dice, peel, and wield spatulas with the same clipped efficiency as their casual conversation. From one glance to the next, a slow-lumbering barge, hauling earth in the canal, made astonishing progress. 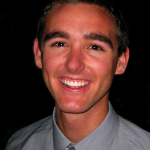 Garrett is a traveling freelance writer, slowly making his way around the world with a laptop and a backpack filled mostly with books.  He is also the founder and editor of theroamingreview.com, an online journal of creative writing, photography, and art.

Can Tho Featured photo by nurpax