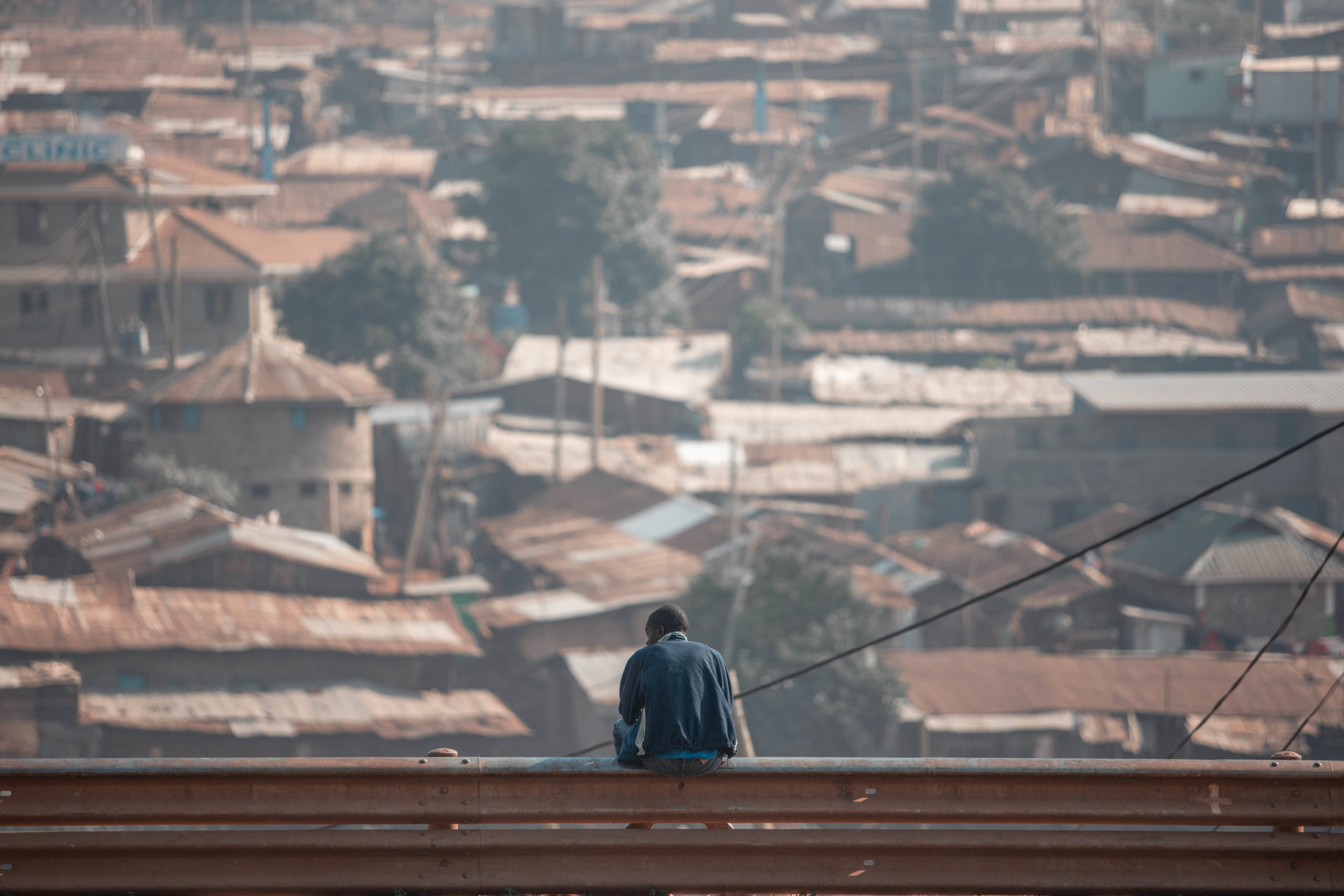 “This is the best view in all of Kibera. Sometimes I come here to think.” whispers Mutua. The cars whip by on the highway in front of us into an oblivion of white noise. The steady hum of activity in the slum below makes room for the mind to wander. “I hope to run in the next election to take a seat in parliament. I want to see change for Kibera.

My “bodyguard,” Mutua, leads me deeper into the maze of sunburnt tin, each dead end is another illusion; Google Maps is completely useless here, most of the roads don’t even register on the map. I knew I would be hopelessly lost without Mutua’s guidance. The smell of chapati and industrial smoke wafts through the thick air. I try to hold my breath as I clamber over heaps of trash and puddles of sewage. We turn the corner down and slip through a narrow alleyway that opens up to an empty lot where last night’s fires were still smoldering. Some young boys stood bent over picking through the ash looking for nails and wood scraps to sell.  House fires are common in Kibera because residents usually have nowhere else to cook but inside their unventilated shacks and they don’t have running water to put a fire out if one starts. “Where do they stay if their house burns down?” I ask. “Usually a kind member of the community will let another family stay with them until they can rebuild their home.” Mutua responds.

The word “Kibera” literally means “forest” or “jungle” in the Nubian language. To give you an idea of its size, there are about 1 million people crammed into 20 football fields. The narrow streets are lined with open stalled businesses selling everything from motorcycle parts to chicken legs and old phones. “I’m going to show you the real Kibera,” Mutua said proudly as he continued on, “I know every street and alley. I grew up here my whole life.”

His Kenyan accent makes everything sound a bit more cinematic. A woman that was sitting outside on a tree stump getting a haircut high fived Mutua as he walked by.  My “bodyguard” assigned to me by the humanitarian organization I was working with was really just this contagiously optimistic 6 ft tall local. However, since Mutua is the local youth leader he is deeply respected by his community and no one, even the gangs, would dare cross him. In fact, I heard that since the policemen are too scared to go into Kibera to arrest criminals they actually entrust Mutua to go and get the man responsible for a crime and then bring him to the police station on the outskirts of the slum. In most cases, coming in with an armored vehicle or guns is not the way to win the respect and trust of locals, in fact it will do the very opposite. The power and respect of a well-known local security is usually the best way to go.

There used to be high levels of crime and theft in Kibera as the gangs took over more sections of the city. The community grew frustrated because when the police were called it would take six hours or longer for the police to answer the call and by that time the criminal would have already gotten away. Sometimes they wouldn’t even come at all! The community leaders came together and decided it was time to find their own solutions. They came up with the idea they called “community justice” which apparently has been quite successful in reducing theft and crime in Kibera. So the idea is that if anyone has something stolen from them, the victim will scream “thief” and anyone nearby will immediately drop what they’re doing and chase after the thief. The thief would then be forced to give back what they stole to the original owner and then be dragged to the town square and publicly beaten by the mob until they pass out, and in some cases even die. This extremely controversial way of handling crime fortunately seems to be a thing of the past as local youth leaders like Mutua have helped improve relations between the gangs and the community and urged them off a path of crime and drugs. Mutua empathizes with the young boys in the gangs because he said he was once one of them, “For a young man in Kibera, there is little opportunity. A life of crime is an easy way to make an income and feel like part of something.”

We pass a school courtyard where some kids were on their recess hour. Nothing will stop the kids from playing football; if they can’t afford to buy a ball they make their own out of trash. Something I really admired about the people of KIbera was their resourcefulness. I watched a young schoolboy kick his makeshift ball into a puddle of sewage and chase after it only to excitedly scoop it up and kick it back over to his friends spraying sewage everywhere. We also made a visit to a plastic processing plant where the residents of Kibera come to chop bits of plastic into smaller pieces which are then sold back to recycling companies to be recycled. Broken glass is used in place of security spikes on the tops of people’s fences. Slum dwellers are probably the most inventive people in the world because they have such limited access to resources. Truthfully, they live a much more environmentally friendly lifestyle by finding value in what others would waste..

A curious man leaned out his door wondering and stopped to shake my hand and ask me where I was from. He showed me inside his humble abode and introduced me to his wife and child who came out from behind a curtain shyly and offered me some chai. No visit to a Kenyans house can be complete without chai.

There’s really only one narrative I hear when people talk about Kibera: poor sanitation, open sewers, disease, intense poverty, HIV. I even had my own hesitations and preconceived notions before I came to work on the project for a local NGO of what Kibera was going to be. The cab driver from my hotel looked at me like “Are you crazy? No, no you don’t want to go there.” When I asked him to take me to Kibera. He actually refused to take me there and would only drop me off near outside the walls of the slum.

Mutua led me to the ‘times square’ of Kibera, a busy intersection where the train tracks run straight through a bustling market center. A new community and job center had been constructed with toilets and showers and a cafeteria for all of its community members to use. We also visited a school that hired women with disabilities to educate youth that may not be able to afford the tuition fees of private schools. The teacher had polio when she was younger and her left leg was deformed making it difficult to walk around. Despite her physical disability, she was determined to find a way to be able to do what she was passionate about: teach the future generation. “I always dreamed of being a teacher when I was little. I love what I do. Even if a family cannot pay for the tuition fees, I still allow them to come to my classroom.” Another day, I was waiting on the tracks to get a shot and I met a young Kenyan man from Kibera that was filming a rap video with his friends. I asked what he was rapping about and he replied “love, inequality, and life.” We also entered a small shack that offered classes on painting, pottery, and dance to the youth as an after-school program.

The more time I spent in Kibera with the locals, I felt it was changing around me, or maybe I was changing. Kibera was no longer just a shanty town off the side of the southern bypass, but a tight knit community teeming with life and creative energy. Yes, the surface level hardships you see are real, but there is joy and hope in this place. Kibera is a thriving city within a city, it’s a cradle for the Kenyan youth – rappers, artists, filmmakers, ballerinas, and teachers passionate about investing in the future of their community. As someone who grew up without roots, I always love when I meet someone who is proud of where they’re from. “Kibera is so good because we are free. Anyone can get inside Kibera. You can be whoever you want to be.”  Mutua says proudly and he smiles so hard as if he was holding back laughter. “I’m proud of my roots.”

Olivia Graziano is a humanitarian filmmaker and photographer. She is currently attempting to be the first solo woman to fully complete an overland route following the Silk Road.