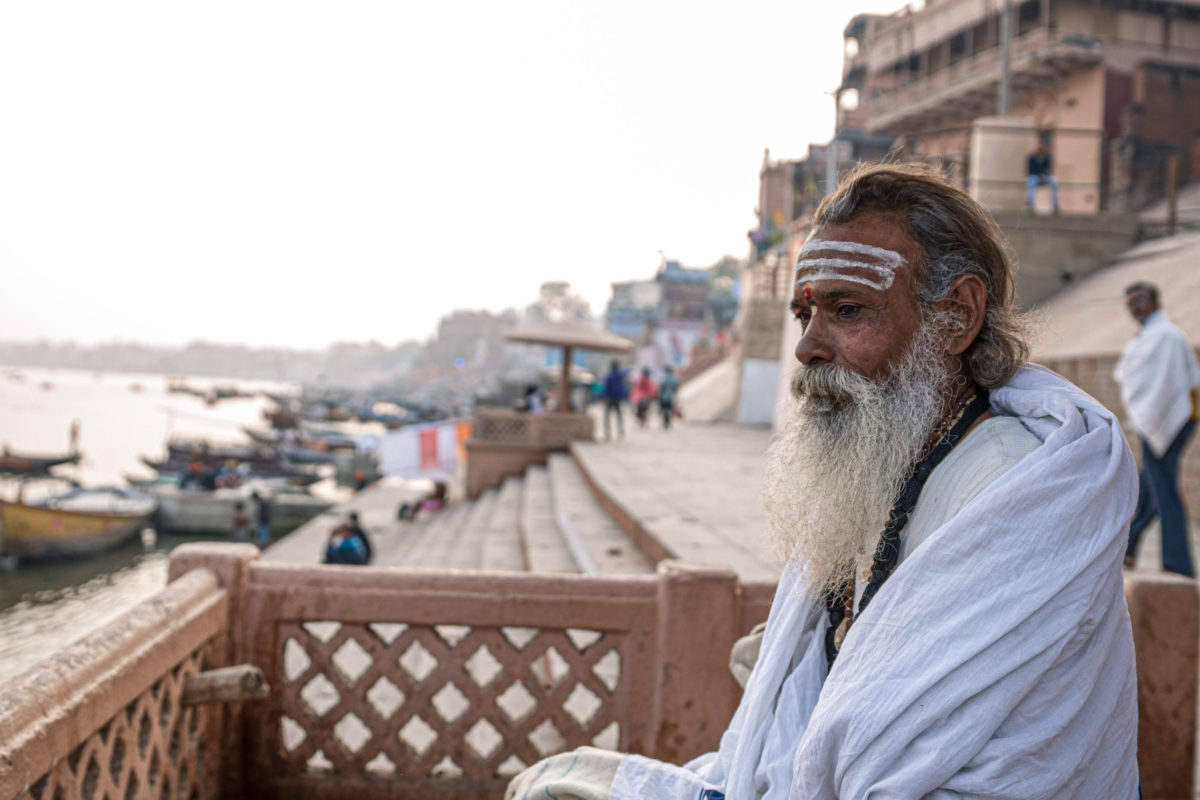 The Man From Another World

As I stood there on the ledge overlooking the heaviness of the burning ghat, a man from another world looked up at me. Perhaps he was a priest, or a Sadhu, or a mourning family member. He stared for a long time in a melancholy and wondering kind of way. He stood out from the crowd of moving humans, cows, and dogs. We were the only ones standing still.

Varanasi is one of the most sacred sites in India because it is believed to have been the home of lord Shiva. Some Hindus believe that the River Ganges pays its respects to Shiva by the direction in which it flows. Usually, the river flows from the north to the south, but at Varanasi it flows from the south to the north. It’s a place shrouded in thousand-year-old mysteries and beguiling rituals.

Varanasi is one of the oldest cities in the world and it is steeped in religion and history. The old city has been destroyed and rebuilt many times; it was ruled by the Mongols, Marathas, and the British throughout history and their influence can still be felt in the architecture and customs of the city. As one of India ’s largest and most sacred pilgrimage centers, Varanasi has been revered for centuries by Hindus and Buddhists, millions of whom come to visit its innumerable temples and shrines, and come to bathe along a three mile stretch of steps leading to the Holy Ganges River. People come here for salvation, prosperity, or healing. Some just come because they are curious about the afterlife. Others are seeking a means of unloading their troubles and sins upon the holy men and the Ganges. 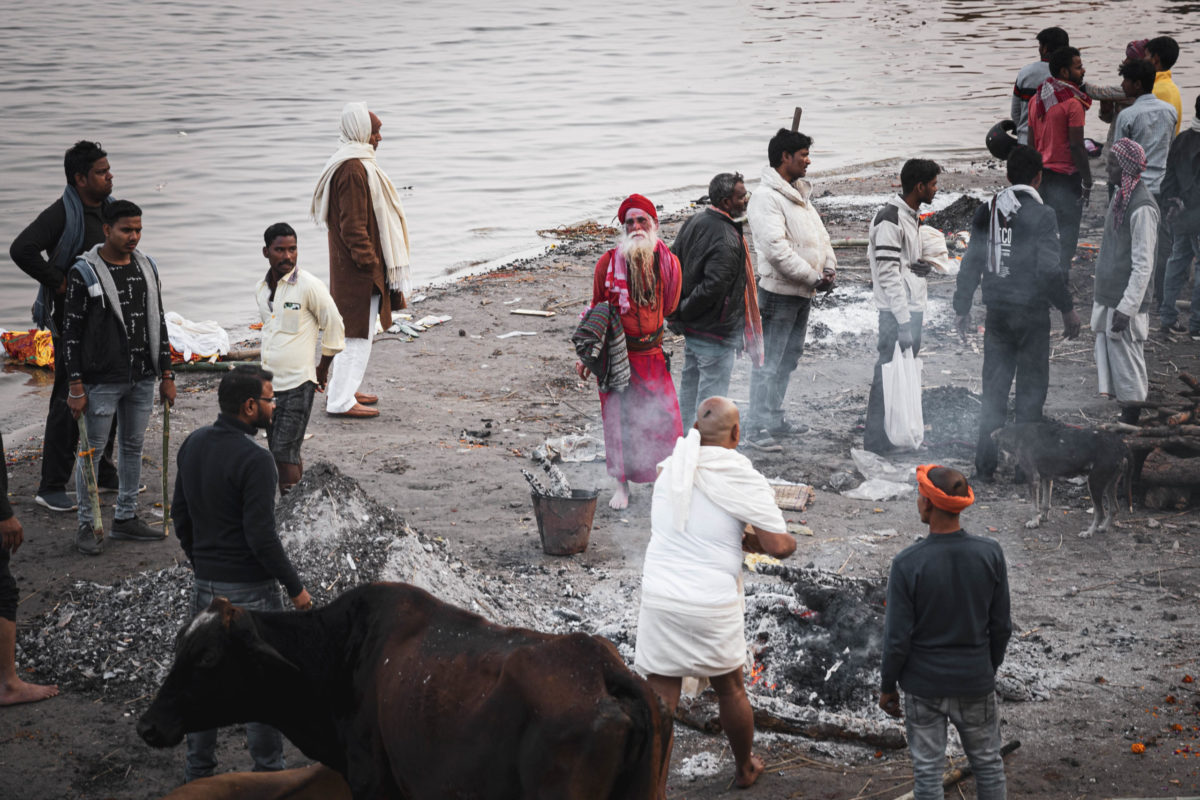 I set out early in the morning to see Varnassi before the rest of the world awoke. As it was still dark, I crossed the burning ghat, where fires were still smoldering. I passed ceremonies of color and incense. A faint tingle of bells and chanting, and the unforgettable smell of burning flesh hung in the air. A woman washed her clothes in the river and I wondered how clean they actually were after she washed them in one of the most polluted rivers in the world.

The River Ganges has a thousand names. Hindu priests regard it as a sin to call her a river at all; they say she is a goddess, the source of the world, her waters holy and healing to Hindus. An old man dressed in all white sat quietly on the steps meditating. Some naked men covered in hoary ash sat huddled together humming in Hindi. I realized trying to understand Varanasi with a western mindset is impossible; the mere asking of one question can lead to another and another … only leading to more confusion. You can only see, hear, and feel; comprehension seems impossible. 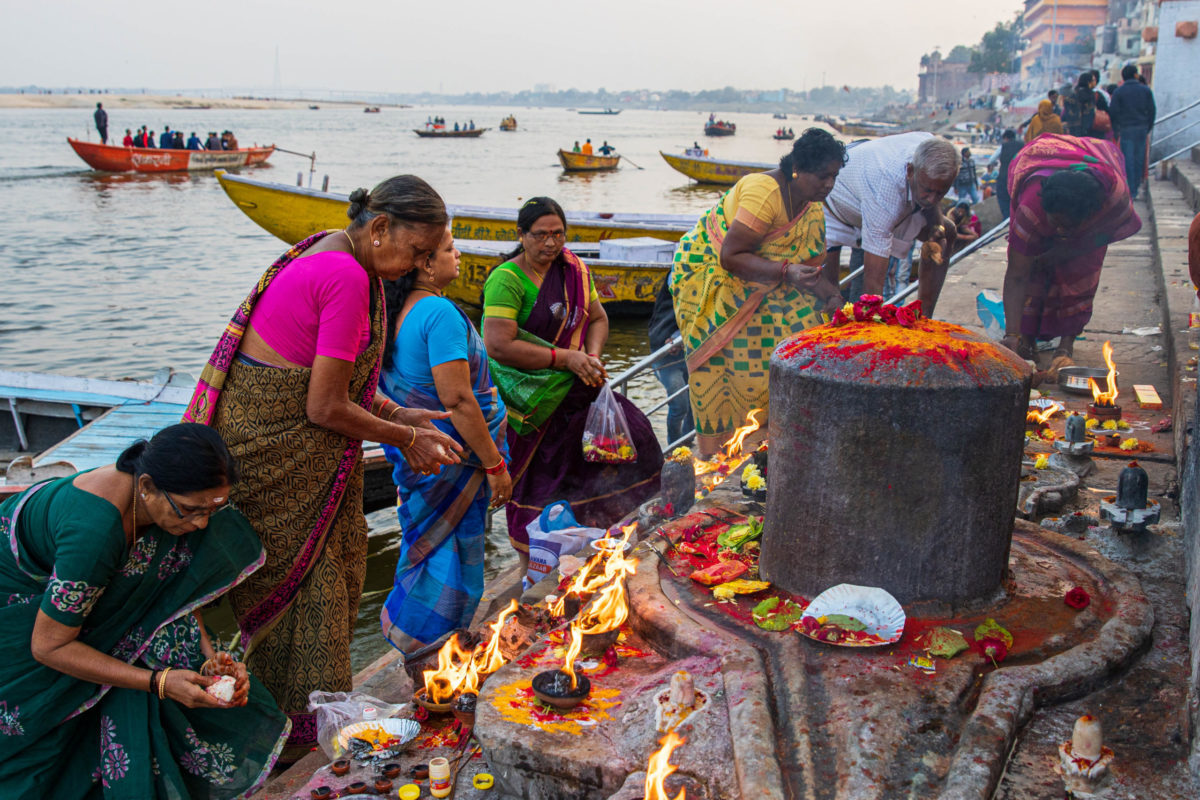 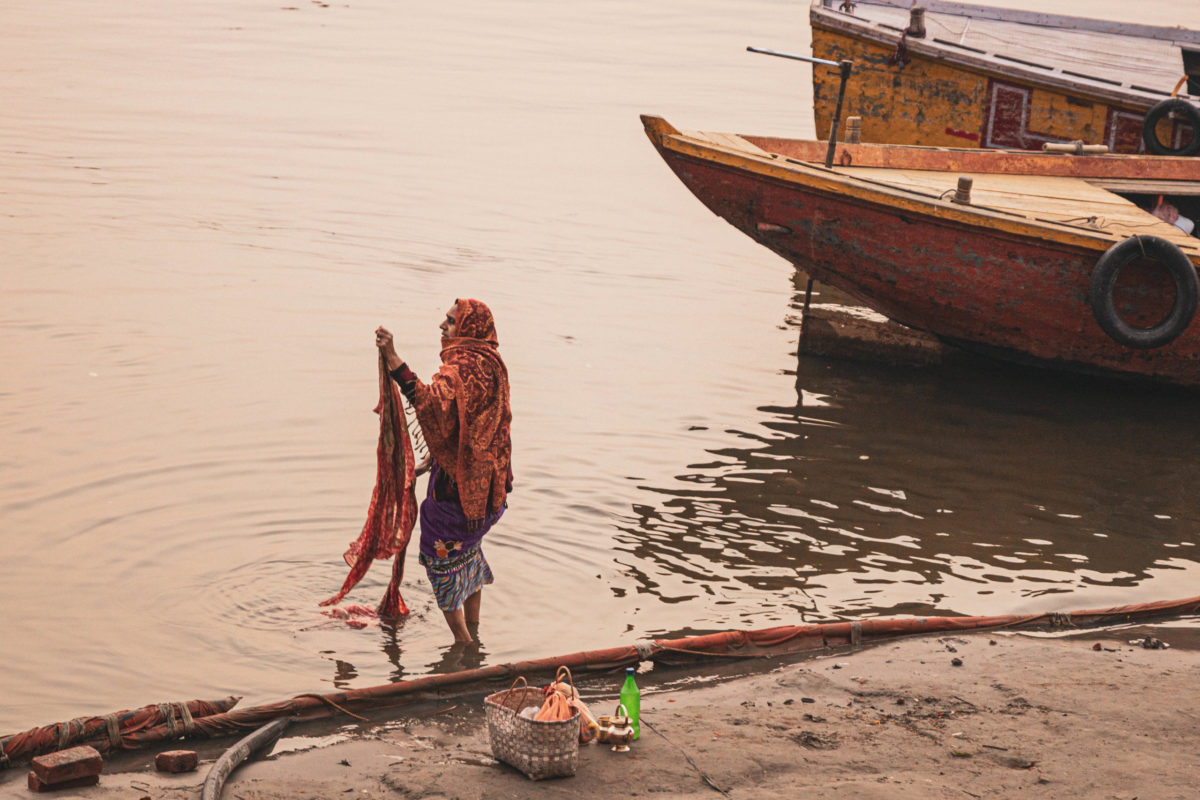 All I knew about Varanasi before I went was that it’s “the city of life and death” and that they burn bodies there. In western culture, death and our perceptions of it are censored; we don’t talk about it and cremations are never public. You can’t understand what kind of impact the realization of your own mortality will have on you until you watch an anonymous human’s body burn in front of your very eyes. In Varanasi, the pyres never stop, twenty four hours a day, seven days a week, year after year. Some people even come to Varanasi to wait — some for years — to die. In Hinduism, the soul keeps taking birth until it has balanced out its karmic balance of actions performed and faced their consequences, whether good or bad. In that context, life seems like a painful, unwinnable game so the ultimate goal is to achieve “moksha” or the “ultimate liberation.” This is the transcendent state that you achieve when you’re released from the cycle of rebirth. The hindus believe this is a shortcut to attain the ultimate liberation and to die in Varanasi and be cremated at the pyres. 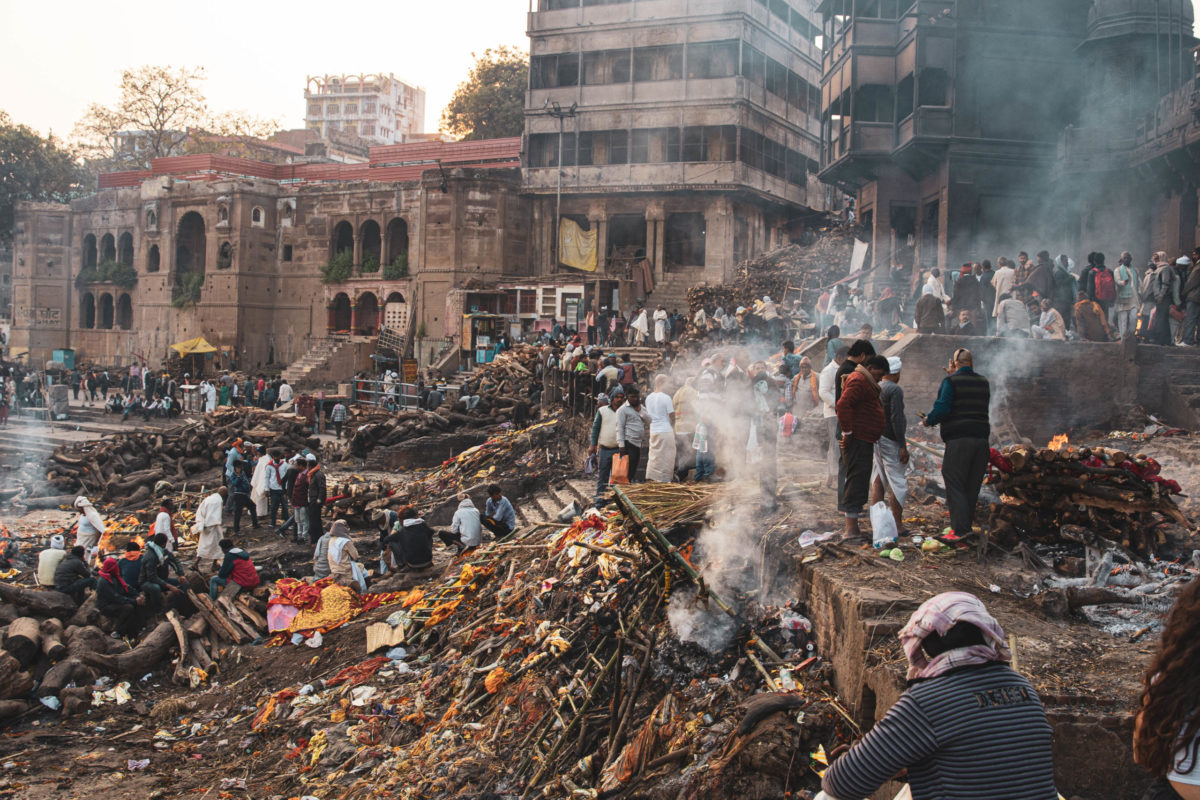 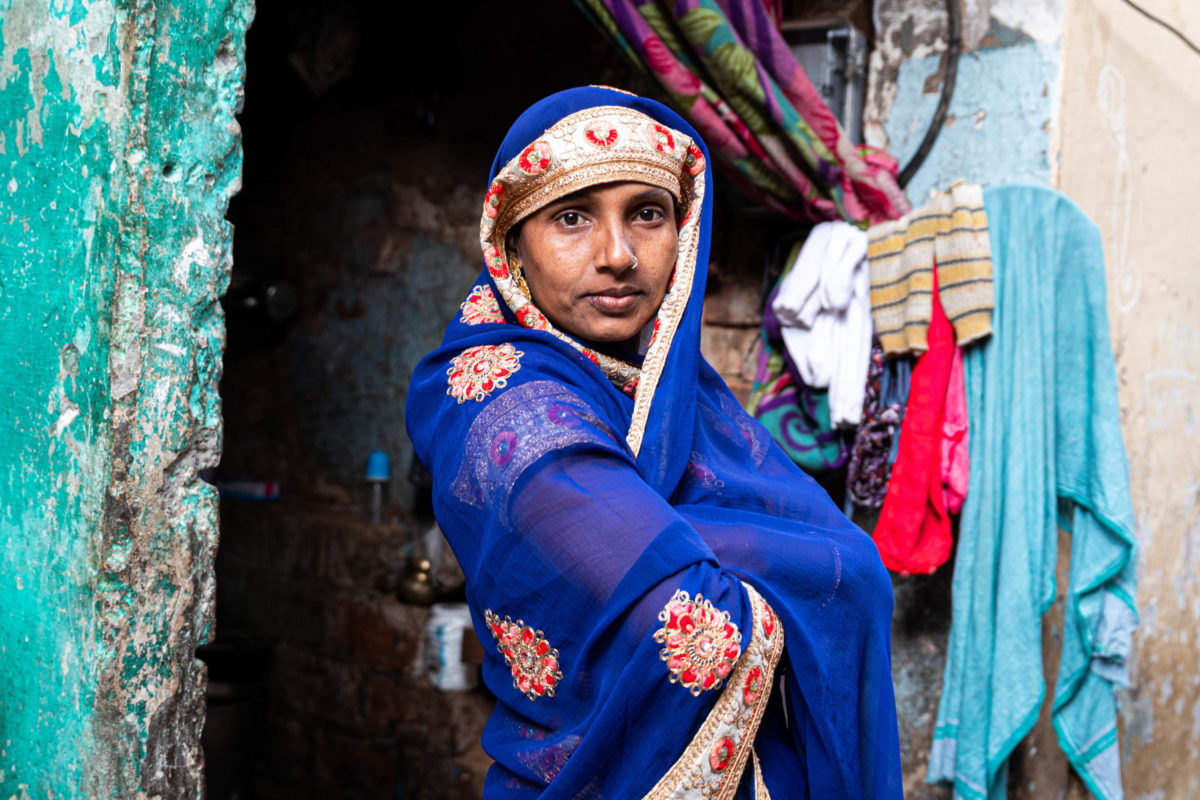 At sunset you can stroll down the Ganges and see holy men or ‘Sadhus’ peacefully meditating along the banks of the holy Ganga. Sadhus live a radical lifestyle by relinquishing all worldly possessions in pursuit of spiritual liberation. There are rumors that some of them are ‘fake’ and are really criminals hiding from the police by cleverly disguising themselves as innocent holy men. They survive off photo tips or ‘donations’ from clueless tourists; A real Sadhu will never ask you for money. Most of the real Sadhus are meditating deep in the mountains only coming down to the Ganges once in a blue moon. If you get lucky, you may happen to see one meditating and praying, or making a pilgrimage to the Ganga Aarti.

Ganga Aarti is an important ritual held on a grand scale every morning and evening on the banks of the holy Ganges in Varanasi. The priests perform the Aarti at Dashashwamedh Ghat dressed in red and gold. The entire Ghat gets illuminated with light and song, the air is humming with energy. The magnificent ritual includes a sort of dance where the priests hold huge brass lamps lit with oil and chant holy mantras that reverberate with the ringing of bells. The transformative power of this ancient ceremony attracts travelers from around the world. 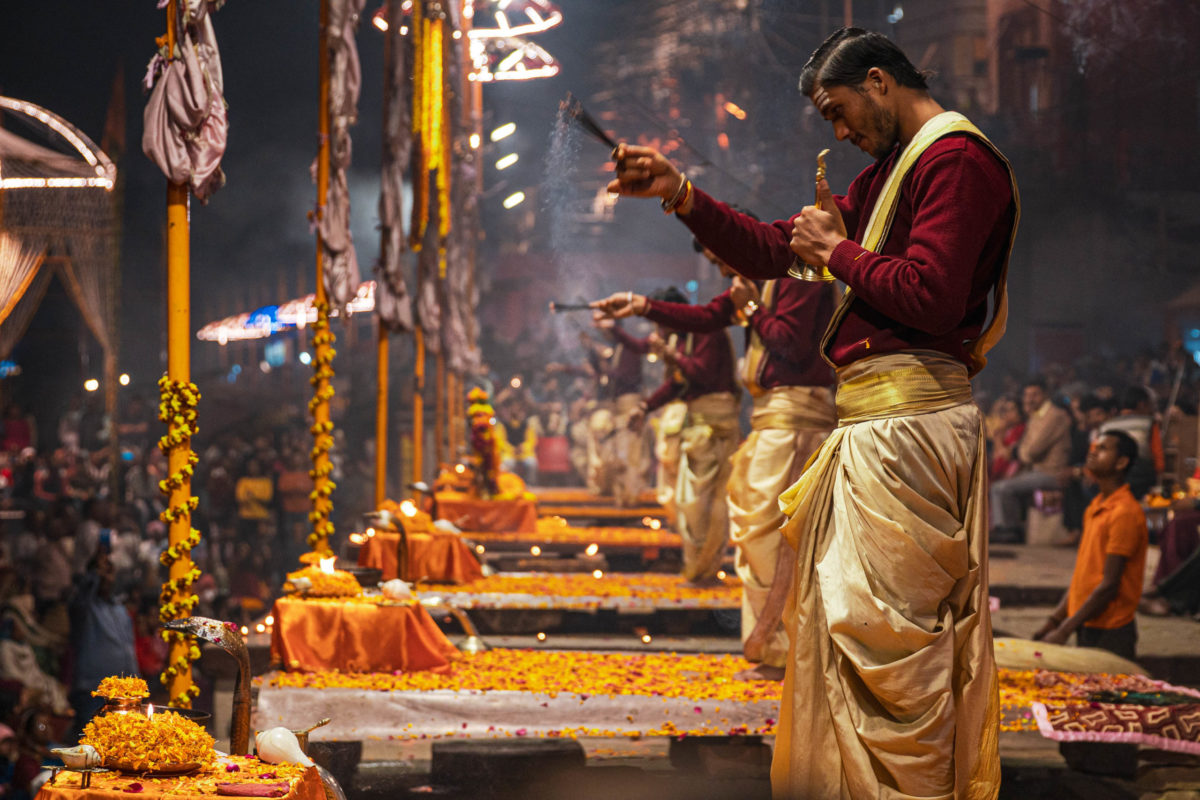 After the ceremony, I walked quietly and blissfully back to my hostel along the stairs, probably one of the only places in India I was able to walk undisturbed. Varanasi, no matter your religion or background, provides a unique opportunity; the strangeness that surrounds you allows you to peel away layers of yourself and see what needs to grow and what needs to be pruned. It’s moments like these that make us take a deeper look at ourselves while also finding beauty in the lessons learned from the depths of disarray. If you look hard enough, you will get to understand that there is a purpose in all of our experiences, whether they are good or bad.

Olivia Graziano is a humanitarian filmmaker and photographer. She is currently attempting to be the first solo woman to fully complete an overland route following the Silk Road.