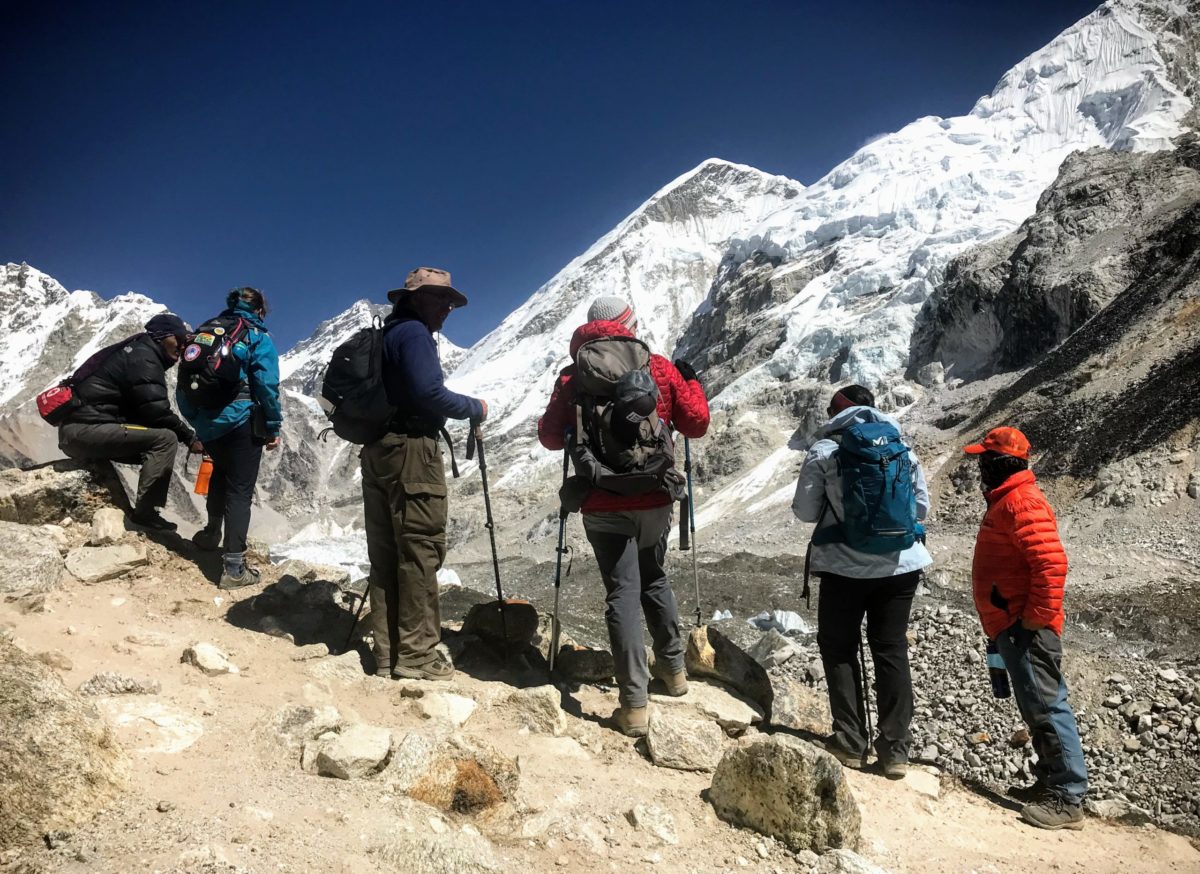 How To Be An Ethical Trekker In Nepal

Travellers go misty-eyed at the very idea of trekking in Nepal, and it’s easy to see why – the country is home to many jaw-droppingly beautiful mountains, including the mighty Everest.

I was very privileged to be one of those travelers and I trekked to Everest Base Camp during a year’s sabbatical spent in Asia with my boyfriend. It was my dream, so I was incredibly happy to have saved enough money to do it in as ethical a way as possible.

While in the airport, waiting for our plane to Lukla to start the trek, I befriended an older Nepalese man. He told me that they have a saying in Nepal, that they have the mountain but the mountain gives them nothing. Now that I’ve been to the mountain, I understand what he was saying to me.

Nepal has had a bad time in recent history. The 2015 earthquake killed 9,000 people and the damage is still clear to see in the Kathmandu Valley. Natural disasters are very bad news for the mountains, as this earthquake created an avalanche that killed 21 people on Everest, or Sagarmatha as it’s known to local people.

Those that live and work in the Himalayas face these threats every day and that’s something to consider when we visit. They’ve all lost people and truly respect the conditions on the mountain as a result, and we should too.

Independent travel is a great opportunity for backpackers like me to support local people and economies. However, this won’t happen if we cut corners and start wandering around the mountains alone, both for our safety and to support those that live on the mountain. I’m a budget backpacker, so I don’t believe that travel has to be expensive, but some things are worth paying for.

There are several companies who operate treks who don’t even use Nepalese guides for their treks, and this can have fatal consequences for those who try to get to base camp in a fast time. When we were there, a Taiwanese tourist had recently died from trying to complete the EBC trek in 9 days instead of 12 on a tour run by a Chinese operator.

So this is the first problem of inexperienced foreigners trying to run treks in a landscape that they don’t fully understand – where managing the health of trekkers, sherpas and guides needs to be a top priority. The second problem is independent trekkers who take their life into their own hands by trekking without a guide or a sherpa and sometimes even without insurance.

It isn’t just an issue on the Everest Base Camp walk, it’s all the treks that you can do in Nepal, including the popular Annapurna range near the backpacker stronghold of Pokhara. A couple I know trekked the Annapurna range alone, and they both got ill and one of them suffered from panic attacks as they were completely out of their depth. They earned enough money to have paid for expert help and decided not to, hugely to their own detriment.

If anything even more serious would have happened, the people of Annapurna would have been forced to try to rescue them as they wouldn’t pay for them, nor did they have those provisions or skills themselves. There’s nothing ethical about that, unless you’re a genuinely experienced high-altitude climber, but at least they paid for food in their accommodations so some money went back to the region. 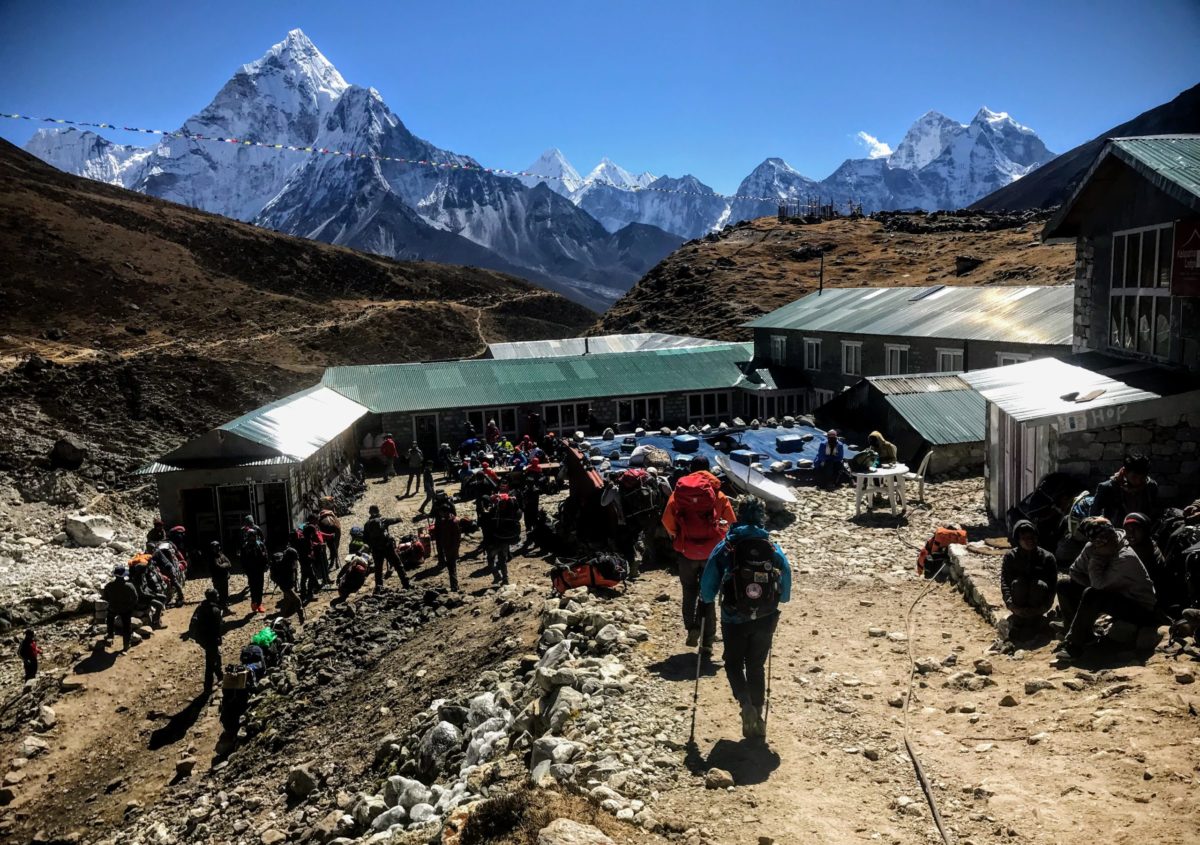 Trail accommodations are mostly in the form of teahouses. These are basic mountain lodges with private rooms (usually with two beds) that provide any or all of your meals as well as a roaring yak-dung fire after 7 pm. The guides and Sherpas are increasingly having to sleep in tents or on the floors of teahouses, especially in higher places like Lobuche and Gorak Shep, as there are so few teahouses for the number of tourists. This isn’t helped by independent trekkers who turn up at teahouses (it’s difficult to book in advance as signal is so bad) and expect a bed or a room to magically be available. These rooms may have been put aside for guides or porters, and then they are forced to sleep outside as teahouses inevitably make more money from foreigners than workers.

We trekked with five other hikers and two guides and three sherpas who we found through a reputable specializes company. Additionally we also paid for food and drinks at the stalls and teahouses we visited along the way directly instead of bringing food with us. Everest climbers have to bring their own food, but it’s available for trekkers all along the route to EBC and even though it gets slightly more expensive, it’s still affordable. The money you pay for food supports the porters who carry it up, as well as the people who look after the teahouses, cook it and serve it, so it has a ripple-down effect. 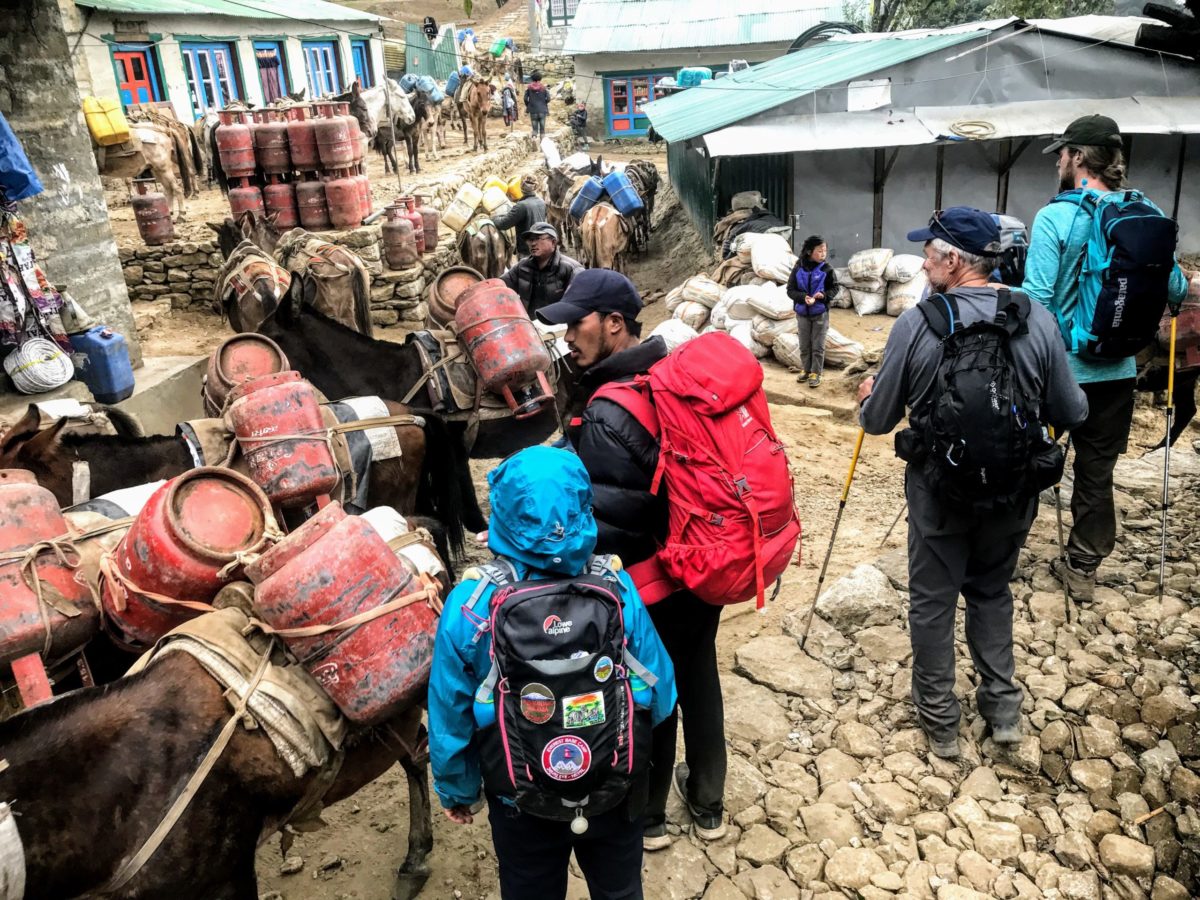 Some people have concerns about the ethics of paying somebody like a sherpa or porter to carry your belongings, but this is nonsense. There is a career route from sherpa to assistant guide to the main guide, and those that are physically able and have specialist training, can supervise climbing treks like Everest. If you don’t pay porters, it’s much more difficult for them to afford the necessary training to take the next step, should they want to do so. If you feel that the wages are not fair, as it can vary, then you can supplement this with tips (which you would anyway).

You get a lot for your money, namely peace of mind. My partner became really ill from AMS at the beginning of the trek and I wouldn’t have been able to treat him properly without the advice of my guide. It was his dream to do it so I was grateful that we were able to manage his symptoms. I would have been completely lost otherwise and I doubt we would have been able to continue. I have very bad anxiety so it made a massive difference to me to have some support in looking after him in such challenging surroundings!

Our guides tested us and gave us a questionnaire every night to check for symptoms of altitude sickness as well as carrying emergency oxygen. At the end of the trek they helped us organise a helicopter out of Lukla as the planes were backed up and we would have been stuck there for weeks otherwise. So they helped us in a myriad of ways that would have been hard to do ourselves.

I learnt so much more about Nepalese culture from hanging with the guides and porters than I ever would from just being with a bunch of foreigners, especially as I went there to educate myself and may have a chance to return. It was also a chance to learn Nepalese which was great but ‘zum zum’, meaning ‘let’s go’ became a phrase I really grew to dread on the trek.

Midway through the trek we stopped over in Pheriche, whose one claim to fame is that it has one of the two first aid posts for people who get sick on the mountain. This tiny hospital was originally built by the Japanese and it was later refurbished and now run by an NGO and staffed by foreign doctors who can fund their own ticket to volunteer there. They do lectures on types of altitude sickness and the more minor ailments that you can suffer in the Himalayas.

There are three types of altitude illness: Acute Mountain Sickness (AMS), High-Altitude Pulmonary Edema (HAPE), and High-Altitude Cerebral Edema (HACE). AMS can be cured by descending, while HACE is swelling of the brain, and HAPE is caused by fluid on the lungs. HAPE is the truly scary one and it kills the most people.

I was disturbed to learn that the hospital was originally set up by foreigners and treated foreigners, making decent health care and evacuation an elitist sport for those with money and insurance. Porters and sherpas are carrying heavier loads than trekkers and they’re forced to continue up the mountain as they wouldn’t get paid otherwise. Some of the porters are from the lowlands of Nepal, and they don’t have the same acclimatisation knowledge that the sherpas do, which has had fatal consequences.

Things are changing and in recent years three porters were evacuated by helicopter as the mountain moves to be more egalitarian. Nowadays the foreigners pay $40 for treatment and the Nepalese pay 40 rupees (50 cents) at the hospital. Foreigners often pay more for tourist sights, but this is finally a foreigner pricing structure that I can get behind.

While people take advantage of Nepal, without giving back to it, the narrative won’t change. Until we support rural communities in the areas that we trek in, the more Sagarmatha won’t give back to those who live in its shadow.

P.S. Don’t forget to tip your guides and porters. They truly deserve it.

Jennifer Sizeland is an author, freelance writer and producer with a travel blog that focuses on ethical and eco-friendly travel and living.