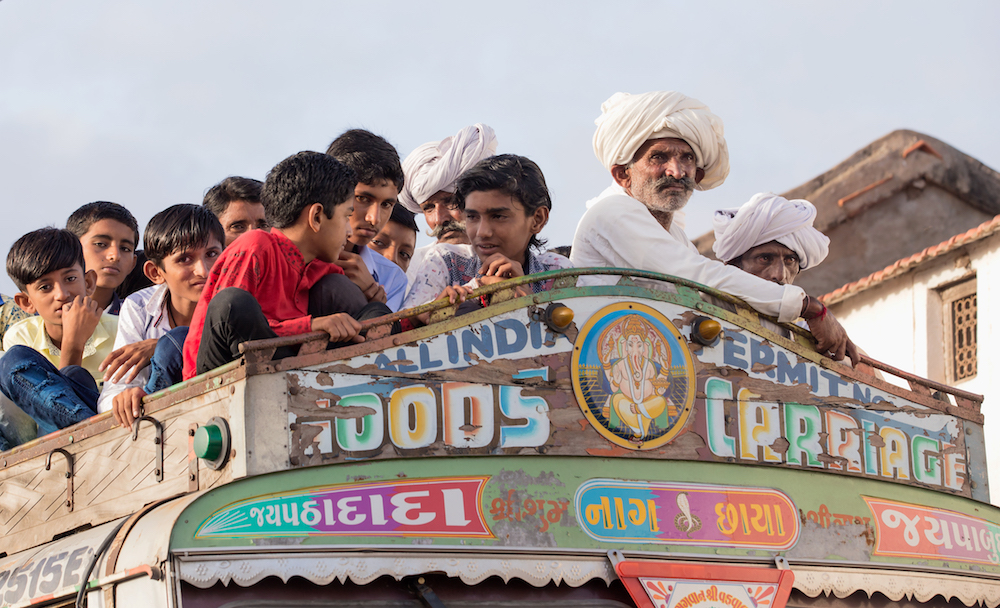 This August I spent just under a week exploring the desert of Kutch with Kutch Adventures India. In a place that sees few foreign visitors (and many of who do come make a beeline straight for the Great Rann of Kutch), I had a different experience. During my time in Kutch, I got to witness desert life, visit the homes of Rabari tribe families, stay overnight in a tiny village, and see a little of the culture.

Apart from the famous Great Rann of Kutch (a sparkling-white salt desert), culture is one of Kutch’s biggest draws. There is a strong tradition of handicraft making which benefits from small scale, sustainable tourism. Much of the handicraft production takes place in small villages, in the desert of Kutch, not far from Bhuj.

I also got lucky during my visit to Kutch. As well as being guided by the wonderful and charming Kuldip of Kutch Adventures, a fellow traveler– interested in photographing the culture and different tribes of Kutch–Amalchi, joined us. He’s been kind enough to let me use some of his photos in this post. (You can find more of Amalchi’s beautiful photos on his Instagram.)

A Glimpse of Life in the Desert of Kutch

Following in the steps of Rabari tribe herders, we came across some different groups, and were even offered chai with them. Rabari herders live a nomadic existence, following their flocks of livestock across the desert at wide ranges. Above you see a herder and his wife loading their daybed onto the most convenient form of transportation–a camel.

During one of our days with Kutch Adventures, we moved from village to village, meeting different families. Though English was spoken little, it was fascinating to learn about the different cultures and traditions in the desert of Kutch, including the making of beautiful fabrics through traditional block printing:

I also visited a village who made lacquer work souvenirs, and had set up a sustainable stream of income for the remote village by selling them to visitors. In some places in Kutch this has had a negative impact, with villages becoming over-commercialized and too focused on tourism (cue kids asking for money for photos), but in the places we visited with Kutch Adventures, none of this was to be seen.

One of the topics that we discussed most with Kuldip, our wonderful guide, was photography and the ethics of it when visiting such remote places. As a blogger, one of my main focuses often is to get good photos that I can use for content, and to share the experience of a place: in blog posts, on social media, and for freelance writing.

The tribes – for example the Rabari tribe– of the desert of Kutch have attracted a lot of attention and insight from outsiders, for their nomadic way of life (which is declining and under threat as younger generations lose interest in the traditional ways), and especially for their beautiful hand embroidered costumes and jewelry. Women of the Jat tribe famously wear huge and heavy gold jewelry (especially nose rings) which have to be fastened around the back of their head to support their weight.

As the tribes have attracted more interest, photographers have come to Kutch to photograph them, in an attempt to document their lives to share with the world and publish as part of journalistic reports. However in many of the places we went, I found my camera to be an unwelcome extra guest. I always believe in asking permission before I click, but usually get a ‘yes’. This time, more often than not, I was told ‘no’. For communities that rarely travel beyond Kutch – let alone outside – a certain mistrust of the camera has developed.

On one occasion, driving past a petrol station where a particularly richly dressed and jeweled women was sitting down. As she saw foreign faces in the car we were passing in, she quickly covered her face with her scarf. Was it modesty? Or had she had one too many sneaky picture taken of her without her permission, presumably by foreigners?

Traditional Culture that is Under Threat

There’s a familiar story that is heard – throughout the desert of Kutch, Gujarat in the small villages and desert communities, and in small communities around the world. And that is that their traditions and culture are already being lost. On our trip through the desert villages and in chats over chai with Rabari families we heard the same thing often: the children do not want to grow up to be herders.

The children also do not want to wear the traditional clothing, wear the traditional jewelry, or get the traditional tattoos. Some (perhaps more controversial) traditions are holding on – such as very young betrothals, young marriages, and grand weddings (packed with tradition). But even these are likely to change over time as access to education for girls — which had previously been denied often – improves. And that surely is a good thing?

But the question remains: is it better to go and take as many photos to document a culture while it still lives? Or should we really try and leave the camera at home, and appreciate with our eyes.

What do you think?

Needless to say, the photos in this post were taken with permission.

This article originally appeared on Soul Travel Blog. Ellie traveled with and was hosted by Kutch Adventures India during her trip to India. All views expressed here are her own and represent the views of Soul Travel Blog.