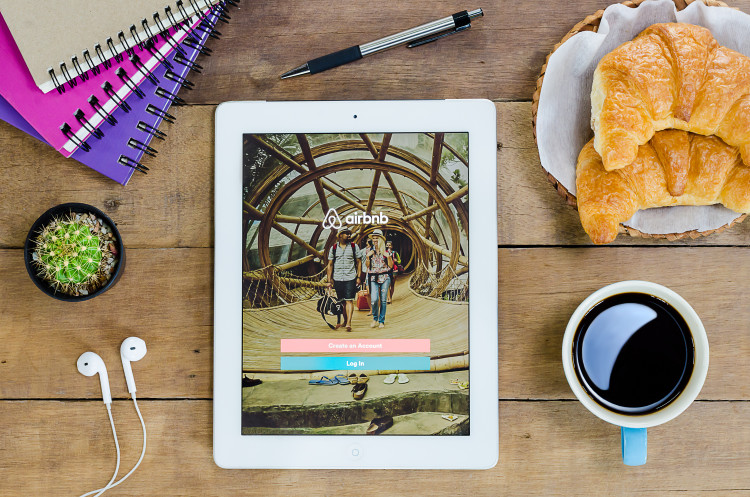 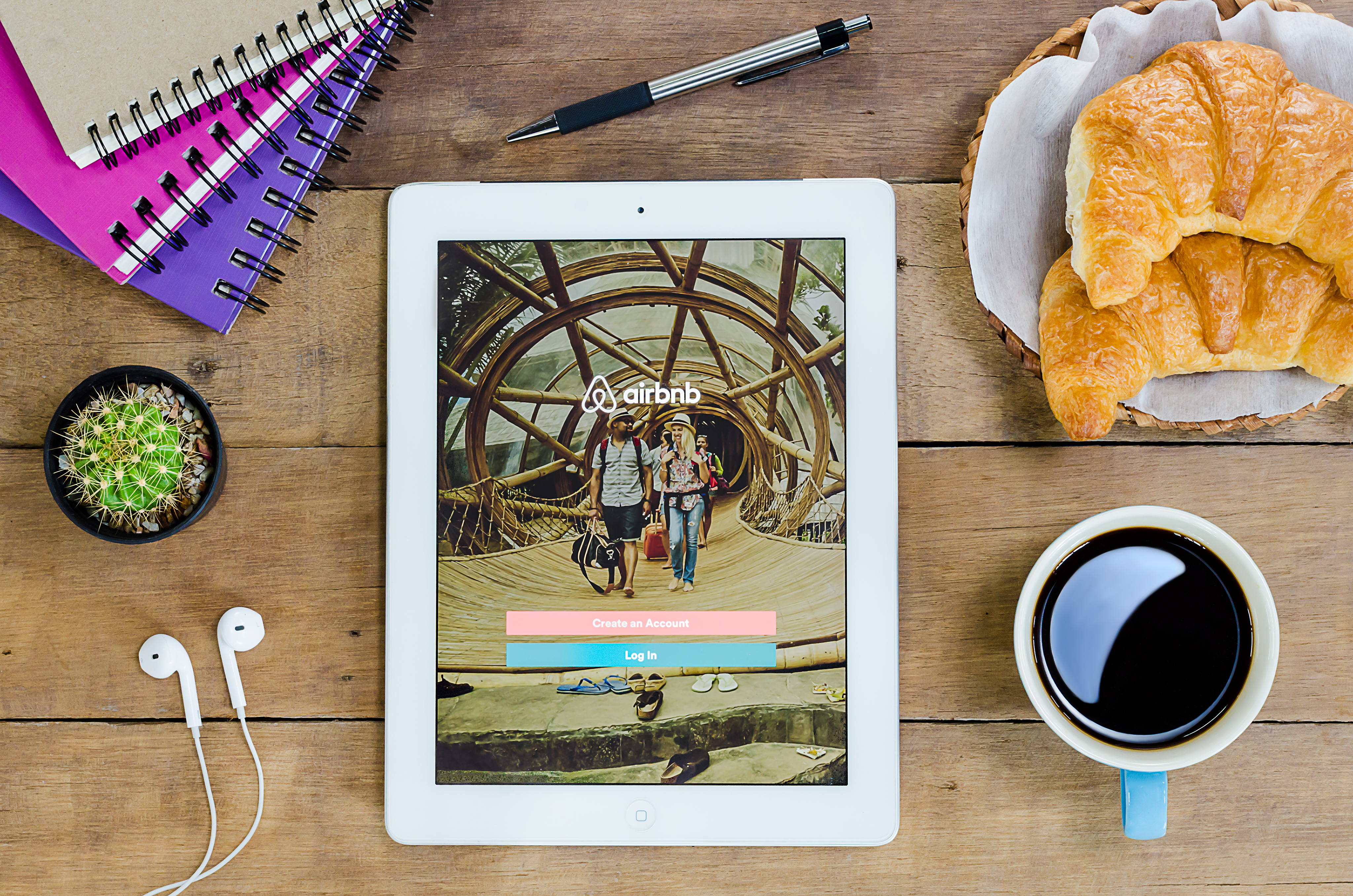 “Live there.” These enticing words appear on the homepage of Airbnb’s website, set against a moving backdrop of video clips showing smiling people opening doors to suitcase-lugging travelers, stallholders at local markets selling colorful fruits and vegetables, and a woman eating cereal while sitting by a window that looks out at the Eiffel Tower. But experiencing a country as if you’re a local is only one of the things lodging giant Airbnb promises by booking on the site. “Belong anywhere,” it says further down on the page. There is a tangible sense of community being advertised, the promise of shared experience and connection.

Airbnb shares stories of its positive effect on the economy, citing data from “economic impact studies” the company has conducted worldwide. As well as experiencing cities as if a local, Airbnb guests tend to “stay longer and spend more [money] in diverse neighborhoods throughout the city.” Airbnb also aids homeowners and renters who use their earnings to help pay household and living expenses; Airbnb says about half of its listings come from people belonging to the low- to moderate-income bracket. It appears to be a win-win, mutually beneficial for both hosts and travelers of lesser means.

But what is Airbnb really doing to the economy on a larger scale? Does the company have an overall positive economic impact on neighborhoods, or is it doing more harm than good?

Founded in 2008, Airbnb—a website that virtually everyone can use to rent their property out to travelers—is now worth over $25 billion, according to CNN Money. Ever since the San Francisco startup has taken over a large share of the lodging market, there have been people who want to shut it down. Major cities such as New York and Paris have become a fierce battleground between Airbnb and government officials and hotel lobbyists.

Amidst all this controversy, I decided to follow the site’s advice and “be a local” on a recent trip abroad. I was eager to see for myself what Airbnb was all about—and attracted by the low prices. My traveling companion and I rented an apartment while staying in Paris. Luckily, we experienced none of the Airbnb horror stories that frequent in the news, and benefited from the good aspects of home sharing that Airbnb touts: quirky, yet authentic Parisian apartment living and direct contact with a local, complete with insider tips on the neighborhood’s best place to eat on a weeknight at 10:00 p.m.

“You’ll want to go to L’Olivier,” Anton, our host, said with conviction. He was referring to a tiny restaurant with yellow awning that we passed on our way to meet him at his apartment in the 6th arrondissement. “Everything there is good.” (Through culinary exploration alone, I’m sure we spent enough money at pastry shops and restaurants to bolster the local economy.)

While we were having a great visit, Anton was dealing with some of the problems commonly associated with Airbnb listings, such as neighbor complaints, building regulations and, well, legality. He admitted that his building technically didn’t allow residents to list units on Airbnb’s website. He would have to take a break from hosting after our stay, at least for a little while.

“I am sad because it has helped me out, and I have met such great people, like you,” Anton said, running his hand through a tangle of mussed brown hair. Anton was a grad student and clearly did not have a lot of money. And for us, staying in the beautiful 6th arrondissement would have been out of the question due to the outlandish hotel prices in that area. It was hard to believe that anyone would care if he rented out his tiny attic apartment—really nothing more than a room with a roll-out futon and closet-size shower—to a couple of tired travelers.

It turns out that a lot of people care. Anton’s experience is a small part of a much larger conversation happening across Paris and other cities worldwide as Airbnb continues to sweep the lodging industry. On one hand, the sharing economy empowers average people like Anton to help support themselves, especially in expensive cities where the cost of living is high. It’s also ideal for travelers who need inexpensive lodging with basic amenities in centrally located neighborhoods. On the other hand, Airbnb can potentially take business away from hotels, both chain and boutique, and may violate building and taxing regulations.

Is Airbnb really a threat to the hotel industry? It is, says the Hotel Association of New York City, an organization that represents more than 270 hotels. According to a 2015 study by the association, Airbnb had a whopping $2.1 billion negative impact on New York City’s economy and hotel and lodging industry, with $450 million in hotel revenue lost. It says Airbnb caused a loss of 2,800 jobs and millions of dollars in tax revenue for the government.

A 2015 study by the University of Chicago Law Review argues otherwise. This study claims that Airbnb is not in fact a threat to hotels, or not as large of a threat as perceived. “Airbnb’s growth does not necessarily come at the expense of the hotel industry,” according to the study. (It may be worth noting that Airbnb offers hundreds of jobs at the company itself in two U.S. locations, and countless opportunities for anyone to make money by renting out their apartment or house.) The competition between hotels and Airbnb may be close to nonexistent for many cities; according to another study done in Texas, a rise in Airbnb listings only led to “0.05 percent decrease in hotel revenues.” It brings up an interesting question: If it weren’t for cheaper lodging options like Airbnb, would some of these tourists be coming to these cities at all?

Airbnb has an answer for the tax part of it that should placate government officials and bring money to cities. Earlier this year, the company actually told mayors of large cities it wanted to be taxed. Some cities, such as San Francisco and Portland, Oregon, are already collecting tax revenue from the company. Other cities still are hesitant to accept it—Santa Barbara banned short-term renting completely. But by asking the government to tax the company, Airbnb is sending a clear message: It wants to be recognized as a legitimate business.

Finally, Airbnb’s philanthropic efforts warrant some attention. In 2015, it gave $1 million to its users and encouraged them to “pay it forward,” or, in other words, hoped to spur random acts of kindness. The company also forged partnerships with officials on the West Coast to prepare for natural disaster relief with its hosts.

Doc-in-a-Bag: A Comprehensive Travel Safety Kit That Thinks for You

Airbnb and the sharing economy are experiencing some growing pains. It may take years to study and evaluate the company’s true impact on the overall economy. But there is no doubt it’s here to stay, so the hotel industry and the government are going to have to adapt.

Back on Airbnb’s website, I watched brief interviews with some of the hosts and visitors. “After hosting hundreds of guests, I realized how I am connected to these different people from different backgrounds…there’s a common human bond that connects us,” said one man from India. A female traveler commented: “You come as guests and leave as friends.” Watching these videos, it was hard for me to believe Airbnb isn’t helping locals, and I doubted major hotels will lose significant business. I thought of Anton in Paris, and hope for him that he’ll someday be able to host again.

Sarah Teczar is a Boston-based writer pursuing her M.F.A. in fiction at Emerson College. A Francophile and lover of languages, she enjoys breaking down preconceived notions by traveling and meeting new people. Follow her @sarahteczar.

Photo of Airbnb app on tablet by Maxxa Satori / Shutterstock.com