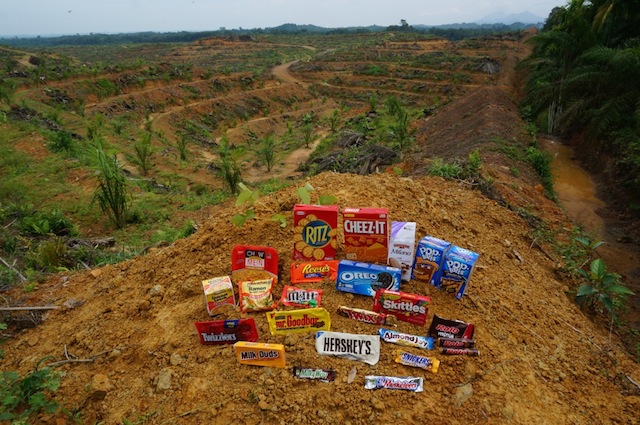 It’s hard to believe that chocolate rabbits can kill orangutans, but a common ingredient in America’s candies is doing exactly that, and worse. Much of the candy you consume contains palm oil that may be linked to child labor, modern slavery, land grabs, rainforest destruction, climate change, and the killing of endangered orangutans. At Rainforest Action Network, we call palm oil produced using these methods “Conflict Palm Oil.”

Virtually all of the world’s Conflict Palm Oil is produced in Indonesia and Malaysia, where unscrupulous corporations have been caught red-handed stealing land from locals, using child and slave labor, and destroying the rainforest homes of orangutans, elephants, rhinos and tigers. In extreme cases, these endangered animals are hurt, poisoned, killed or become orphaned.

The production of Conflict Palm Oil is on the rise in order to meet growing demand from global sweets and snacks manufacturers looking for cheap oils, often to replace trans-fats. This market is driving the use of slash and burn techniques to convert millions of acres of rainforests and carbon-rich, environmentally-sensitive peatlands to industrial palm oil plantations. The loss of these rainforests and peatland carbon sinks, combined with smoke from the illegal fires often set to clear them, adds hundreds of millions of tons of CO2 to the atmosphere each year. In fact, deforestation in Indonesia alone contributes more carbon pollution into the atmosphere each year than all the cars, trucks, planes and ships in the U.S. combined.

Last Easter, Rainforest Action Network launched The Last Stand of the Orangutan campaign to cut Conflict Palm Oil from our food supply. We identified the top 20 movers and shakers in the snack food industry that use Conflict Palm Oil, dubbed them the “Snack Food 20,” and developed a targeted campaign to convince each and every one of them to eliminate Conflict Palm Oil from their supply chains. The Snack Food 20 includes household names all Americans know – such as Pepsi, Kraft, Heinz, Campbell’s and Hershey’s – as well as global companies many Americans are less familiar with – such as Conagra Foods. 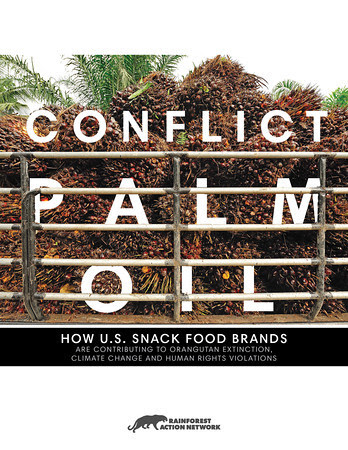 When we started, there was only a small but dedicated group of people working against all odds to transform the complex and opaque supply chains of these multibillion-dollar international corporations. Over the course of this campaign, thousands of activists from all over the country have joined us, paying visits to corporate headquarters while dressed as orangutans, placing “Warning: Conflict Palm Oil” stickers on Valentine’s candies in dozens of cities, and submitting tens of thousands of emails, phone calls and #InYourPalm photo petitions to the Snack Food 20, telling them they don’t want Conflict Palm Oil in their food.

From Poop to Paper: Michael Flancman Gives Us the Scoop

After several months of intense pressure, some of the Snack Food 20 companies stepped up and committed to cut Conflict Palm Oil from their supply chains. Companies started returning my calls to find out what kind of policy and procedures needed to be adopted to address the risks of deforestation, massive climate pollution and human rights violations in their supply chains.

So this Easter, a year after we exposed their Conflict Palm Oil problem, Nestle, Unilever, Mars, Kellogg’s, Mondelez, and General Mills have all taken meaningful steps to engage their supply chains to source only responsible palm oil. Whilst others – including Pepsi, Conagra Foods, Heinz and Kraft – have yet to take any real steps towards adopting truly responsible palm oil policies and practices.

The scale of the problems with Conflict Palm Oil can seem insurmountable. But we are reaching the tipping point when it comes to cutting Conflict Palm Oil from our food supply. We have shown that we have enormous influence over these companies. When we speak out and tell our friends and families about Conflict Palm Oil, brands listen. Without our trust and goodwill, no brands can survive.

We’re on a roll, and we need to keep the pressure on the companies that have not taken action. Together, we’re going to push Pepsi, Kraft, Campbells, Heinz and ConAgra to take a stand for rainforests and all their inhabitants, and we are organizing a Global Day of Action this May 20th to Cut Conflict Palm Oil. We need your participation to make this day huge. Find out how you can join the fun and eliminate Conflict Palm Oil from the food supply once and for all. 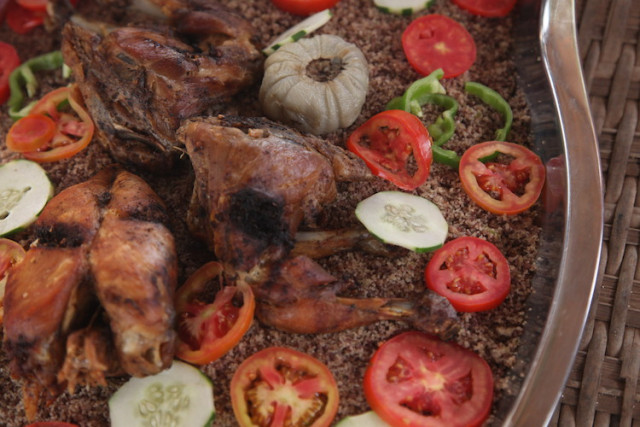