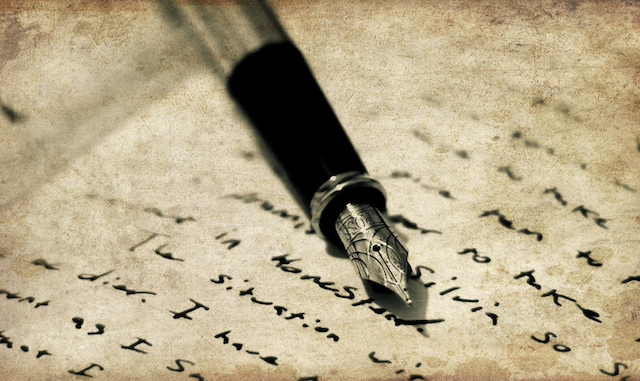 Why Americans Should Have a French Love Affair with Their Language

Why Americans Should Have a French Love Affair with Their Language

Dr. Joelle Bahloul contests that English, despite how it is treated in the school system and widely in American culture, is a beautiful language. And yet, Americans don’t seem to have the googly eyes for the English language that they have for foreign languages such as French, Italian or even Spanish. These are considered romantic and exotic languages, while English is so common that its charm is often forgotten. Meanwhile, we consider the ability to speak these “romantic” languages a trait seemingly only possessed by the extremely interesting and intelligent, and often the cause for wooing a member of the opposite sex to fall madly in love with such charm.

But where is America’s appreciation for our own language? It is a part of our culture that is perhaps lost in LOLs and 140 character tweets, but it has a history just as interesting as our European counterparts. In terms of pride, we could learn a lesson from the French.

At the heart of French national identity, the language has been protected with vigor in an attempt to preserve the culture and collective memory of France. A recent proposal to add English classes to a French university was faced with great opposition: the words “Stop behaving like the last representatives of a besieged Gaulish village” were printed on a large banner on the school’s campus alluding to the famous French comic strip hero Astrix. Astrix lives in a small village called Gaul, the last to remain French in face of Roman invasion. The French identify with Astrix’s village in that they are a minority in language relevance. They are willing to fight to secure French as a major language and as an identity.

Perhaps it is hard to reach this parallel as Americans because of our perceived lack of culture. However, while it may be tempting to categorize America as a redneck paradise, tainted by commercialization and political gridlock, we do possess an underlying national culture that is often eclipsed by our country’s global presence. Running through your neighbor’s lawn as child, devouring a pork sandwich at a backyard barbecue, and cheering at football games are all distinctly American pastimes. These seemingly meaningless activities are in reality the traditions that compile our identity as a nation, as most Americans are involved in them at some point in their lives.

Such is the situation with the English language. The product of imperialism and British colonial rule, America was born an adopted child of the English language, a history that translates to every single American. And it is evident from written works by the revolutionary Thomas Paine to the prolific speeches made by Martin Luther King that English is more important to our identity than we recognize. Furthermore, in our homogenous accent but unique dialect, we all profess this collective memory in each word we speak.

An examination of how public schools teach English, specifically grammar, is essential in moving towards an appreciation for the English language. Bahloul, who raised her daughter in America, discovered the pitfalls of the American technique of teaching English by observing her daughter’s work.

“Students are encouraged to read and write, but no tool is given to them to proceed with the writing or reading,” said Bahloul. “Grammar has not been taught formally during those 12 years spent in schools. Bits and pieces have been instructed but nothing as a whole formal system.”

Bahloul also mentioned she was appalled at the spelling system, in which kids are asked to remember a list of a dozen or more words, their meaning and spelling, but totally out of a sentence or narrative context.

“The French spelling system I have been trained with is a complex system of language education in which kids learn words and grammatical structures by studying a text with those structures,” said Bahloul.

Bahloul also emphasizes the importance of the rote memorization of American poetry in training children to learn the great assets of their culture and language. But in the US, there is a strong movement towards rejecting rote learning as a legitimate learning method.

“The problem is that by doing that, teachers who follow this philosophy in fact participate in the erasure of the American collective memory,” said Bahloul. “It often concludes in denying kids learning, refusing to pass on important knowledge.”