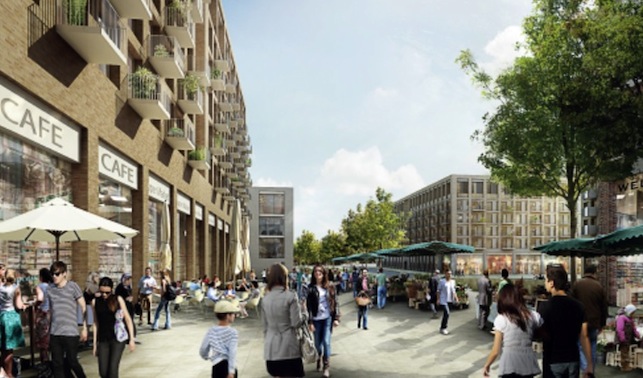 In northwest London, the town square of Cricklewood travels by bicycle. At 107 square feet, the town square has a clock tower and provides benches for people to gather.  Since the mobile town square rolled in to Cricklewood, residents are coming together for more community events such as film screenings and exhibitions.

Cricklewood “” which, as you might guess from the name, is in England (northwest London, specifically) “” was never really a bustling town on its own. It started as a tiny village, and later became an outpost for travelers and a place where people built large villas. Lately, it’s turned into a bustling neighborhood, but as Pop-up City writes, it still lacks municipal services “” there’s “no town hall, no library, no town square, not even a single bench.”

And so Spacemakers and Studio Kieren Jones made a sort of moveable urban feast to substitute “” a mobile town square. They built, on the back of a bike, a mini clock tower, which holds benches and stools and umbrellas. Parked and unpacked, it takes up about 107 square feet. People liked it. And they used it, says Pop-up City”….Continue Reading