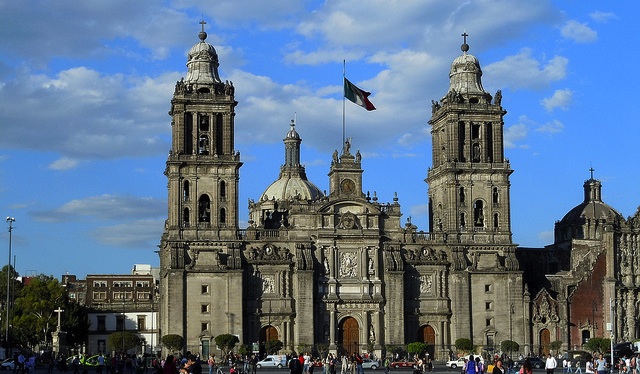 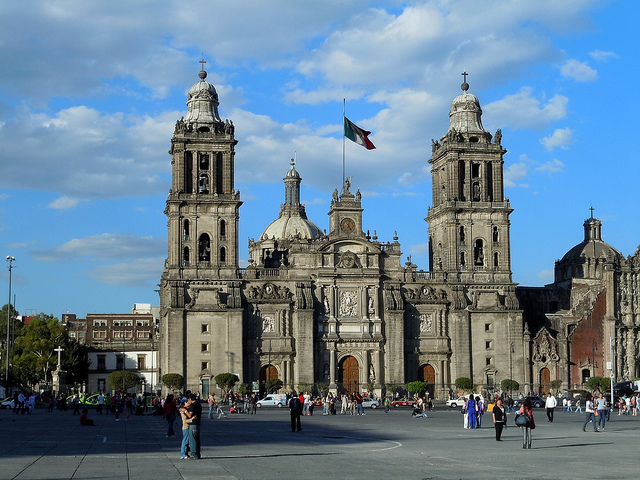 I will admit that before visiting Mexico City earlier this June, I completely lacked a concrete idea of what the city looked or felt like. Little did I know its nearly 700 years of history as the former center of Aztec civilization, and then as the capital of the Spanish colonial empire, resulted in a city that is rich in a revolutionary past and brimming with attractions from historic sites, to cozy neighborhoods, to restaurants that left me in withdrawal for days after I returned home to New York City.

“This is what we call eclectic,” AnilÃº, my group’s tour guide, told us on the morning of our first day. She was referring to the differing architectural styles of the various buildings we were driving past. She pointed out the neo-Florentian Postal Palace (the Palacio de Correos de Mexico, for those who speak Spanish better than I do), the art nouveau exterior of the Palace of Fine Arts (Palacio de Bellas Artes), and the Fifth of May Street, home to many buildings designed in classical French style.

Though AnilÃº was discussing architecture, eclectic is a fitting way to explain the lure of Mexico City as a whole. Each neighborhood offers a distinctly different experience.

Polanco is one of the most upscale neighborhoods in Mexico City and is home to an array of art galleries, boutiques, and restaurants, as well as embassies and large-chain hotels.

Fashionable Condesa is a bit younger, with nightclubs, bars, and shops catering to students and artists who live there. (Its charming mix of colonial and modern architecture only adds to its appeal.)

Then there are the restaurants of Mexico City, which serve a wide range of Mexican and global cuisines. The attractions, which range from the ancient ruins of the Aztec Templo Mayor in the city’s central square, to contemporary sites such the Revolution Monument with its astounding views; the impressive Modern Art Museum; and the art deco-style Palace of Fine Arts. 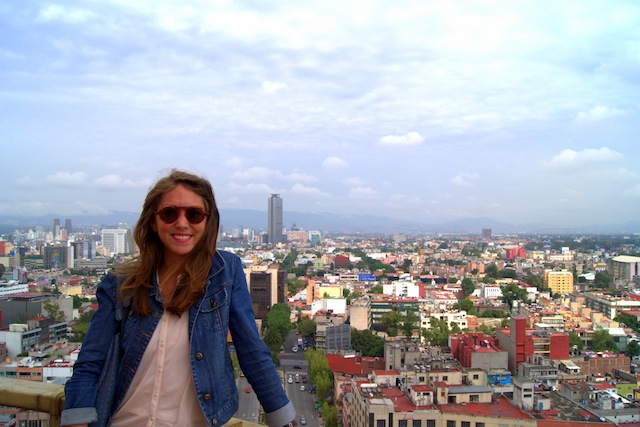 One pleasant afternoon, we wandered the laid-back Colonia Roma neighborhood. After someone in the group compared it to Williamsburg, Brooklyn, I couldn’t let the association go. Like Williamsburg, Roma is perfect for long thoughtful strolls. The juxtaposition between colonial and beaux-arts architecture, suggested a neighborhood of people who appreciated the old and embraced the new.

Roma is home to an array of stylish boutiques that sell locally designed and handmade clothing, jewelry, and accessories. It also contains some of the best galleries in the city, although by the time we made it there (it was late on a Saturday evening), most were closed.

Instead we walked to RÃ­o de Janeiro Park. Tall trees with willowy branches fill this airy green space. Even though the giant statue in the fountain at the park’s center is a replica of Michelangelo’s David — a gift from Italy — the park and its surrounding plaza brings to mind the famous Place VendÃ´me in Paris.

In addition to its charm, Colonia Roma is also home to a number of impressive restaurants. Though we had to wait twenty minutes to be seated at Maximo Bistrot for lunch, the meal was worth it. Dining here may be reason enough to visit Mexico City.

Plate after plate emerged from the kitchen, and everything was eaten communally. The meal commenced with tangy Japanese raw fish, mussels drenched in a rich butter sauce, fresh artichoke salad, tuna with avocado, and flavorful octopus ceviche. The entrees that followed included red snapper, huitlacoche-filled green ravioli, and hanger steak with mushroom and mashed potatoes  Bright yellow truffle risotto was spooned onto the lovely mismatch of delicate assorted plates as a side. Before dessert arrived, I didn’t think it was possible to eat anything else, but I ended up devouring more than my fair share of the molten chocolate cake and rhubarb tart that came next.

Chef Eduardo GarcÃ­a emerged from the kitchen to tell us about the menu, which changes every day, and his plans to bring something new to Mexico — his personal diver, and his commitment to the purest ingredients. “I don’t do it to be pretentious,” he explained. “I do it because that’s what I believe.”

By dinnertime, we had yet to regain our appetites, but nonetheless arrived on time for our reservation at 99, or Nueve Nueve, which is set in the courtyard of the Roma neighborhood’s Casa Lamm. Long strands of thick rope hung from the high ceilings, and two of the walls overlooking the courtyard were made entirely from glass. Sipping a mojito and admiring the little marvels tucked into Nueve Nueve’s many corners (a tree sprouting from a shallow pool of water; the pool’s edge bordered by flames, for example) was a peaceful end to a busy day. 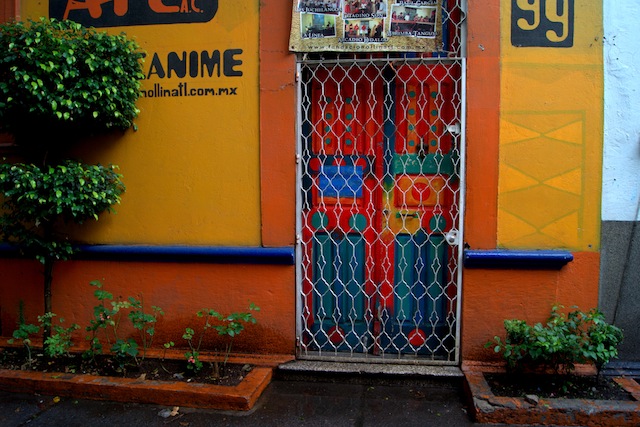 Another restaurant worth visiting is AzulCondesa in the Condesa neighborhood. Here we shared an array of first courses, which seems to be the only way to go in Mexico City. Guacamole heaped on thick circular chips and covered in dehydrated grasshoppers was a surprisingly delicious favorite amongst rich, spicy dishes.

Touristy, but nonetheless a highlight of the trip was ascending the Munumento RevoluciÃ³n Mexicana, a historical monument located in the Plaza of the Republic. Originally designed by French architect Emile Bernard in 1897, its bare steel structure towered over the plaza for more than 25 years. Money for the original project ran dry, leaving the structure unfinished until construction began again in the 1930s when it was redesigned as an art deco-style monument dedicated to those who died in the Revolution. The Munumento closed again in 1970 and only recently reopened in 2010 as part of a governmental effort to recover public spaces.

Our group boarded a glass elevator and sunk to the lower level of the tall burnt orange dome, then took a series of staircases up to an area at the very top, which opens to the public next month.

As I stepped onto the dome’s deck, I gained an instant appreciation for the enormity of the city. I was surrounded by 360 degrees of tall buildings almost as far as I could see. Mountains loomed in the distance in every direction, contrasting dramatically with the miles of urban skyscrapers that stretched from all sides of the monument.

When we were once again on the lower level of the dome, AnilÃº, pointing to a large grey building a few miles away, asked me, “See that?” The barn-shaped building she is referring to looks abandoned, but its façade, which features enormous letters spelling out CINE OPERA, gives the impression that it was once a grand structure. AnilÃº tells me that this, like the monument we are in, is one of the sites the government is restoring in order to create more beautiful public spaces.

Closer to ground level in the nearby Historical Center of Mexico City, we visited Templo Mayor and the Catedral Metropolitana. Touring Templo Mayor, one of the main Aztec temples, and its accompanying museum were beneficial to learning about the city’s beginnings as the hub of Aztec civilization.

The temple’s museum features two enormous Aztec monoliths that are in pristine condition, as well as a collection of artifacts. 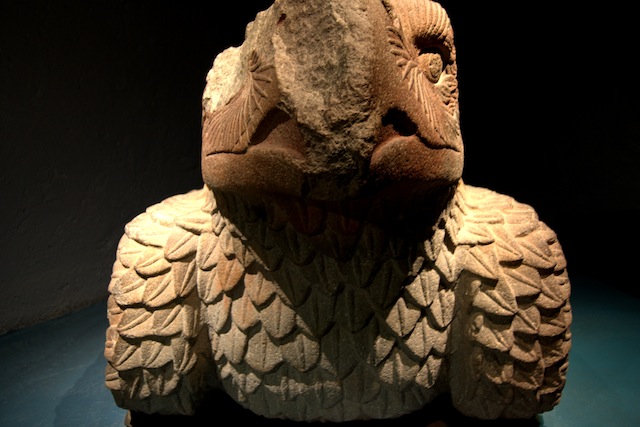 I found the most striking relic to be a gigantic stone eagle whose backside had been hollowed out. The museum guide explained to us that the hollowed out section is where the heart and blood of a human sacrifice would have been placed hundreds of years ago.

After we exited the museum, we made the quick walk to the Catedral Metropolitana. One of the aspects of Mexico City I was most surprised and impressed by was the amount of green that saturates the city, and outside the cathedral, where trees bordered the building and its surrounding plaza, was no exception.

The Spanish constructed the Catedral to declare their spiritual dominance over their conquered population, and their immense effort shows in both its imposing exterior and the resplendence within. Ornate chandeliers hung from the high ceilings, and a striking, intricately decorate gold narthex greeted us when we walked inside. Everything was in the details, from the oil paintings that were displayed at the alter, to the collection of locks fastened around the feet of a statue of San Ramon (to prevent gossip), to the skull and crossbones that sat atop red velvet in a glass box in one of the capillas. 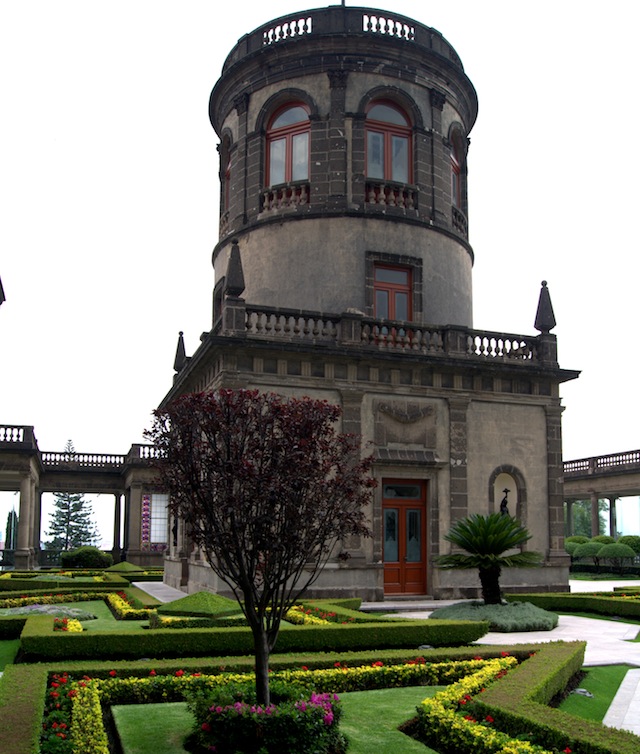 The next day, we visited the Museo de Art Moderno and Castillo de Chapultepac, both located in the 1,695-acre Chapultepac Park. The modern museum houses many impressive exhibitions under a massive amber-colored dome. By far the most moving painting I examined was Frida Kahlo’s Las dos Fridas, which our guide explained illustrates Kahlo’s painful divorce from Diego Riviera. In it, two versions of Kahlo sit side by side, holding hands. Their hearts, graphically painted on each version, are connected by a thin vein running between the two Fridas.

The legend goes that the hill Castillo de Chapultepac is located on is the source of the sweet water in which Montezuma used to bathe. Although the Castillo, or castle, houses many gorgeous rooms, the most fascinating part of our visit was exploring the many porches, courtyards, and gardens. Giant pots brimming with pink flowers sit atop the balconies overlooking the city and park. In another section, water gushes from a grand fountain, which rests at one of the castle’s entrances. High on the hill, the rolling mountains that lie outside the city’s limits can once again be admired.

Feature Photo by rutlo all other photos by Lane Florsheim

This trip was sponsored by the Mexico Board of Tourism.