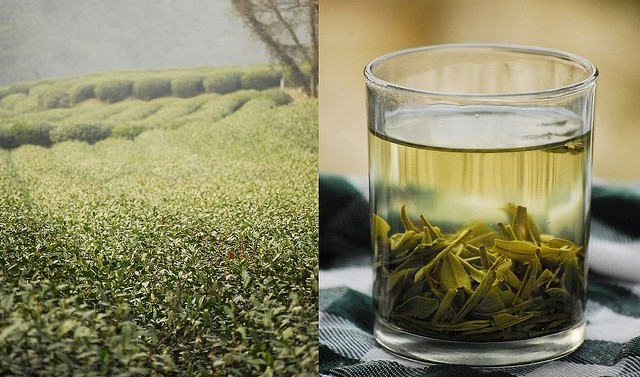 A Traditional Longjing Tea Ceremony in China’s “Heaven on Earth”

Every year in early April the Chinese begin to methodically pluck green tea from hills peppered with idyllic terraces. Spring is considered the best time of year to harvest, and once the flowers bloom, so begins the season of tea ceremonies to honor this prized crop. And given I had been in Shanghai for the past few weeks, there was no better time to do the same.

A visit to the home of Longjing tea was not only a reviving getaway from the bustling city of Shanghai, but also a reflection of how tea has been an integral part of the Chinese culture for centuries.

Dubbed “heaven on earth” in numerous Chinese poems, the history of Hangzhou spans back over 2,000 years. It came to global attention once the Beijing-Hangzhou Grand Canal — the world’s longest canal — was built. However, it is West Lake and Meiijawu Tea Cultural Village that are most alluring in present day. 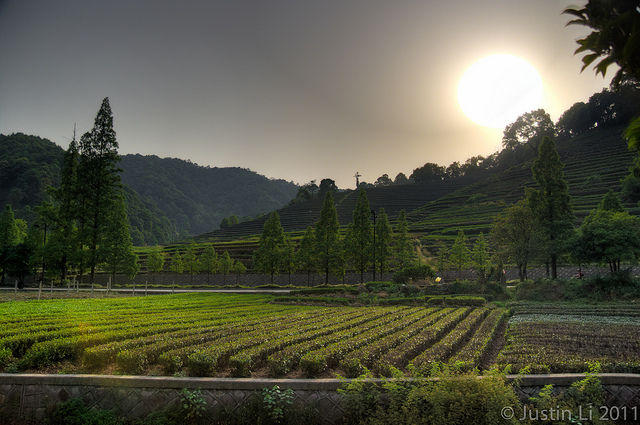 I join a group of four other 20-something-year-olds, one of which is also a New Yorker. Once we reach Hangzhou,  just an hour away from Shanghai, we are welcomed by the first trees we’ve seen in weeks.

We embark on a boat that will take us along West Lake. Flanked by abundant hills of green foliage, it’s hard to believe we are in the same China we left earlier that day; the air is unadulterated and we are surrounded by nature. After an intense month in Shanghai’s foggy, skyscraper-infested metropolis, it’s comforting to witness China’s unaltered beauty.

Nested amidst the greenery of the mountains lies the pastoral Meijiawu Tea Village. Countless tea pickers, sheltered from the sun under their conical traditional hats, fervently and delicately pluck tea.

We stop on a narrow street to shamelessly pry into the perfect rows of green tea bushes; the workers don’t bat an eye at us. Given how hot it already is outside, we wonder how long their days must be.

Fresh tea leaves are being poured into a large wok, and stir-fried a few times. The dried tea is then wrapped in kraft paper and put into an urn filled with lime with the purpose of refining the smell.

After strolling around the grounds, we proceed towards a Chinese garden, where the tea fragrance is enrapturing. A large teapot acts as a fountain inside the courtyard’s pond.

Just in time for the traditional tea ceremony, we are greeted into a spacious chamber where different types of loose teas are displayed on a large wooden table. There are three types of green tea: newly picked, several weeks old and several months old. The youngest tea offers the highest amount of possible health benefits, including anti-aging and anti-oxidant properties. We are told the fresher the tea, the higher the quality and thus, higher the price.

Our host scoops a pinch of loose tea for each of our glasses and begins to pour hot water. The first sip is bitter, but part of the delight of savoring green tea is inhaling the rising steam while the tea is brewing. She then adds a bit of dry fruit that sweetens the aroma.

“It’s important the water to be at right temperature,” she says. “For Longjing tea, about 95 degrees (Celsius), or the health properties will be lost.”

The best time to pour the water is about a minute after it has boiled. The color has to be slightly green, certainly not brownish ““ a sign it has brewed too long. This will give the tea the perfect taste and preserve its quality. We are also advised to avoid placing any lid on the cup, for the same reasons.

An Intimate Tour of Kerala

A generous pinch of Longjing tea can last for up to five tastings. Firm believers of its life-enriching qualities, the locals drink it incessantly. They believe it brings them longevity and health. And given the life expectancy of the people here ““ 77.44 for men and 82.25 for women — I can see how true that is.

Once the ceremony is done, I pay 60 RMB for my jar of fresh green tea. I am already envisioning steam coming out from my newly purchased Chinese porcelain cups.

We head back to Hangzhou, to visit Liuhe Pagoda, also known as The Six Harmonies Pagoda. Originally constructed in 970 AD during the Northern Song Dynasty, it was destroyed in 1121, and fully reconstructed by 1165, during the Southern Song Dynasty. The sturdy structure is a masterpiece of ancient Chinese architecture, overlooking the Qiantang River.

As I curb my gaze into the horizon, I exchange glances with a group of elders in the distance. They are surely Chinese workers of the land, whose grueling years of intense labor under the scorching sun have sunk deep onto their faces, like the rigid lines of a map.

This is China, I think to myself: a cup of steaming green tea, rooted in thousands of years of history, sturdy, long-lasting traditions and arduous hard work. 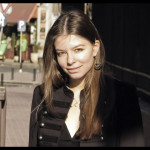 Romanian by birth, but New Yorker at heart, there is nothing Monica enjoys more than traveling and exploring other cultures. Her 20-something relentless quests stem from a long bucket-list, always accompanied by her camera. Follow her adventures around the world on her blog Monica-Suma or on Twitter @MonicaSuma.