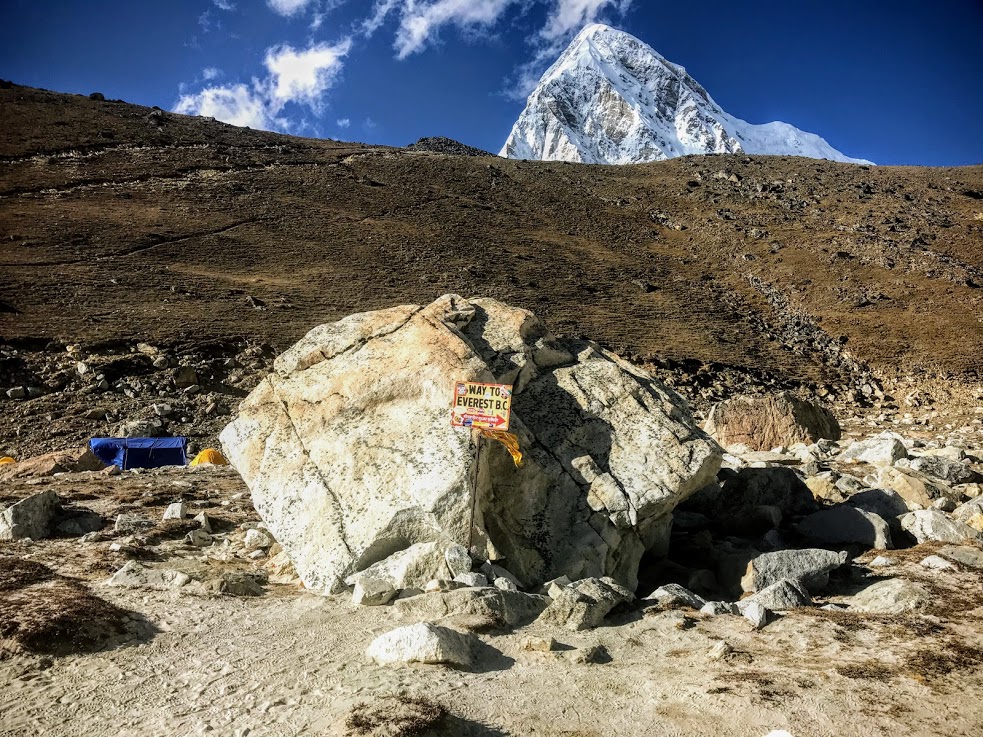 Taking my anxiety in high altitude in Nepal

In a year when travel is slowly starting to return, it brings with it anxiety for many of us who have been at home for months on end. As someone who had always been extremely anxious about travel, this is something I know all too well and I have had to overcome it myself. Before the pandemic hit, I challenged myself to do the most terrifying thing I just imagine, trekking at high altitude to Everest Base Camp.

Travelers dream of Nepal and I certainly did, I had wanted to walk the unsteady path to Everest Base Camp ever since I knew of its existence. My mind conjured visions of prayer flags rippling in a serene wind, an oversimplification of the country, created by my teenage mind that I never seemed to shake. I thought it was the altitude that would be the problem, but the challenges were much deeper than that.

While Nepal offers some of the best trekking in the planet, it is combined with some of the world’s worst infrastructure. It’s an undoubtedly poor country in economic terms (the second poorest in South Asia after Afghanistan) yet it’s incredibly rich in spirituality. I was hoping the connection with the dramatic landscapes and a liberal spinning of the prayer wheels would offset my painful anxiety – but it was as much a part of the journey as the iced peaks.

Something that I’ve come to embrace in adulthood is the fact that I’m anxious through to my very core. At my heart lies a fundamental fear of everything, and travel has really enabled me to override the madness and the sadness – to let my curiosity loose in many countries that vary in the level of challenge.

You can measure your discomfort in degrees of fear, but that’s all it is – discomfort. I had a dream and it was time to take my anxiety to the highest it had ever been – over 5000m elevation. I hadn’t even realized that we were going that high until a friend mentioned it at our leaving drinks. The celebratory Prosecco turned sour in my mouth as I choked it down. I didn’t want to celebrate anything until I’d got down from the mountain and I could toast to my own survival.

The preparations went by in a whirlwind of activity until we found ourselves sitting in Kathmandu’s tin can airport and full of adrenaline for the main event. This optimism was misplaced as it didn’t happen that day because the congested airport just couldn’t cope with the number of tourists. We spent a night in a small room with a rattling air conditioner and got up at 4 am to be driven to an airport in the middle of nowhere. Our plane penetrated the Himalayas in the early afternoon and we were forced to start trekking at altitude in our sleep-deprived state. It was the absolute worst way to start the trek and by the time we got to our accommodation, I felt like there was a shard of ice through my brain.

I lay in bed that night thinking about my boyfriend’s nan who had sadly passed away just before we left. We spent a lot of time at her bedside and the pain was still really tangible to me. Being at altitude can really amplify your emotions and some people cry every day on the trek as a result. The way it will affect your mental health is unknowable and it’s surprising who it will take down. In our group, the two people that suffered the most with the altitude and illness were actually the two physically fittest, my boyfriend and a woman who’d climbed Kilimanjaro.

Being able to focus on those two actually really took my mind off my own anxieties and we got them up the mountain. My boyfriend thankfully recovered but the woman was so ill that she was forced to descent after several days of sickness and diarrhoea. It made me feel incredibly lucky that I was physically well, despite the obsessive worry that ran through my brain on a loop. Apart from throwing up in a bucket at a teahouse in Gorak Shep, I wasn’t ill at all. In fact, I was the only person to be well without having taken any altitude tablets so I had much to be grateful for. This was driven home even more at Base Camp itself as it is a very political place. There were trekkers making speeches about human rights violations in Iran and memorials to those who were missing or wrongfully imprisoned, so that really made me consider my luck in life.

Every day on the trek was more difficult than the last in terms of altitude and then the long distances that you cover on the descent. This makes the trek sound awful but I felt like my body became stronger in all the ways that it needed to support me. My anxious mind watched the porters, mules, trekkers, yaks, children, and dogs going by. I was part of the mountain community now and I tried to concentrate on being fully present in the Himalayas for the one and only time of my life.l that I would be there.

The Fanciful Aesthetic of a Quaint Village in Poland

On the way back down, I watched my boyfriend playing peek-a-boo with a young child on a chair and came to the realization that it was nearly over. The moments I’d been dreading were actually moments to cherish. At what other time in my life would I have the constant jeopardy of being impaled on the dangerously pointed horns of yaks or leap out of the way of marauding horses? The trek was a lesson in survival as there were real threats to consider that needed brain space to get me through it all.

When we walked back through Lukla, I felt like a hero for all of five seconds and it was a wonderful feeling. It was so different from the headspace I’d been in when I left Lukla – when I was tired and drained, with a heavy backpack and a heavier heart. My troubles hadn’t left me, I’d just concerned myself with the things that were tangible instead. The mountains were bleak at times, but that’s what stripped it down for me. I had no WiFi and no distractions but I did have a wonderful group of people to play cards, chess and jenga in the evenings.

Our days were slow – we trekked, we drank tea, we stared at the snow swirling around the mountaintops and we went to bed early. It was the antidote to modern life and a pilgrimage for the purposes of a healthy mind. Taking my anxiety to altitude was better than I could have imagined and another raft of worries that never came true. Once the world opens up again, I hope we can overcome our collective anxieties to travel the world once again, with a whole new appreciation and sense of purpose.

About the author: Jennifer Sizeland is an author, freelance writer and producer with a travel blog that focuses on ethical and eco-friendly travel and living. Follow her on Twitter and Instagram @landofsize and at her website: www.landofsize.com.