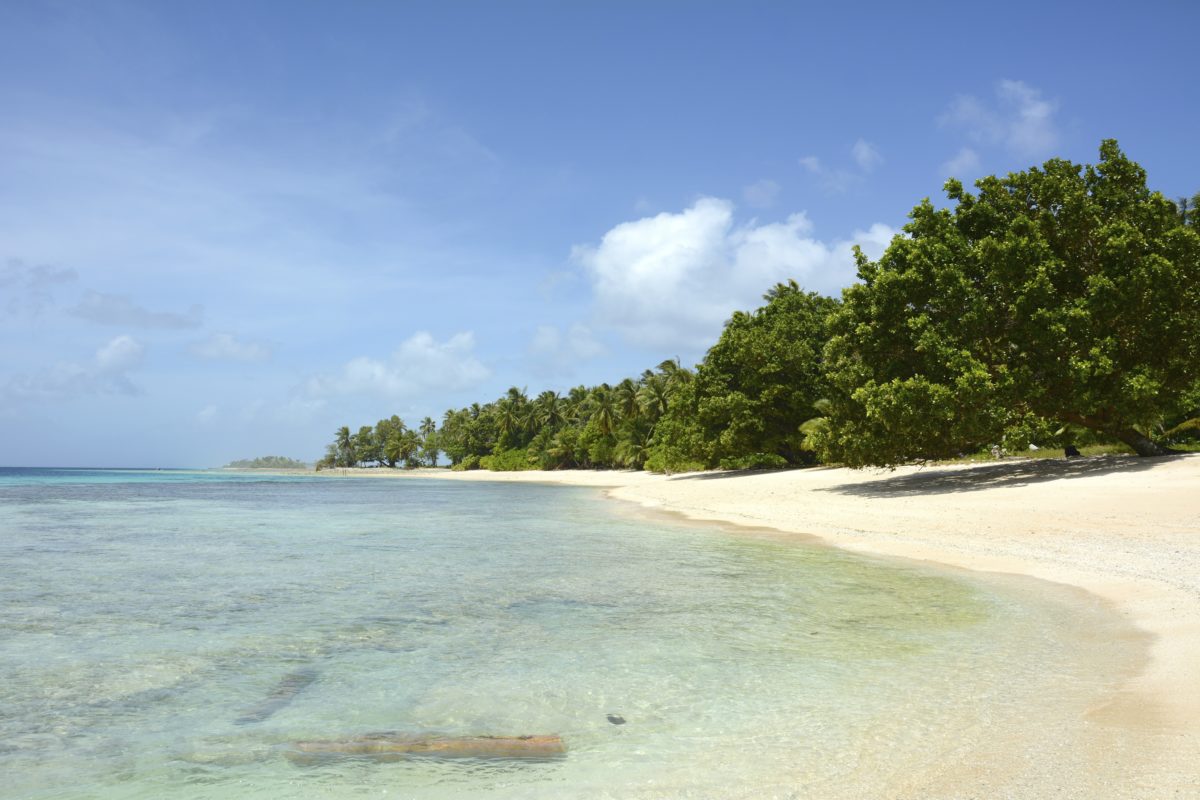 The Marshall Islands and Their Music

The following is an excerpt from the author’s book, Around the World in 575 Songs : Traditional Music From All The World’s Countries, Volume 3 Asia & Oceania.

On 1st March 1954 the USA detonated a hydrogen bomb (code named Castle Bravo) at Bikini Atoll in the Marshall Islands. This was just one of 23 nuclear devices tested by the USA at sites in Bikini Atoll alone over a 12-year period. Like other such atolls, Bikini is part of a coral reef.

Let me just repeat that. The USA detonated a nuclear device over a coral reef.

Every coral reef is an incredible ecosystem formed over thousands of years. They’re also very dangerous places to let off a nuclear bomb. That’s because they naturally break up into large-sized particles that come down to earth quickly before they’ve lost most of their radioactive energy. This is what happened in March 1954.

Bravo was a 15-megaton explosion, three times more powerful than its designers had predicted and 1,000 times more powerful than the weapons used against Hiroshima and Nagasaki. It created a vast fireball, and a mushroom cloud that rose to 130,000 feet and rapidly spread across several miles of ocean. The coral atolls that form the Marshall Islands are dispersed tens and hundreds of miles apart. The inhabitants of Bikini had all been evacuated before the tests started, but not so the other atolls:

“Later that day, the wind carried irradiated coral dust from a completely vaporized island at Bikini Atoll to the east and covered the atolls of Rongelap, Ailingnae, and Rongerik. Children played in the fallout because they thought it was snow. They ‘tasted it’ and ‘rubbed it in their eyes.’ Women used the white flakes as shampoo until their scalps burned and their hair fell out in large chunks. Men, women, and children became violently ill and ran into the lagoon for respite, but they could not sense it was dangerously radioactive.”

It took the Americans 48 hours to evacuate the Rongelapese, who were the worst affected. And there was worse to come. For years afterwards the Rongelapese were used as human guinea pigs without their knowledge or consent. Project 4.1 was a research operation set up by the Americans immediately after Castle Bravo to study the effects of radioactive fallout on the Marshall Islanders, who were not told of the existence of the project or of the continuing risks to which they were being daily exposed.

The islanders only spoke Marshallese (a language that contains no word for radiation), so it was hard enough anyway for them to communicate with the visiting medical personnel. Their inability to control or even to understand what was happening to them was highly traumatizing. They were subjected to many invasive medical procedures, the purpose of which wasn’t explained. There was a huge increase in miscarriages and birth abnormalities, but as the link to radiation exposure was never made clear the women felt that they were being punished for something.

Musicologist Jessica Schwartz has studied how the Rongelapese women used song to deal with their situation. The power of song is deeply embedded in Marshallese culture, and traditionally women used to chant and beat drums in order to ward off ill fortune. As a result of the radiation poisoning most of the women developed thyroid cancer, and the ensuing surgery frequently altered their voices, making them reluctant to speak or sing in public. Eventually though they would find some release through song.

One of the songs that Schwartz analyzes, 177, was named after a clause by which the United States government designated which Marshall Islanders were eligible for compensation for the nuclear testing program. The song expresses what the nuclear legacy and radiation sickness means to the lives of the Rongelapese, succeeding in finding the words and the language to articulate experiences that are so alien to their culture. The final verse contains a question that is left hanging: “When will I be released from my sufferings that I still now do not understand?” Questions are also at the heart of Kajjitok in ao ñan kwe kio. The title, Schwartz tells us, means “These are my questions for you now,” but kio can mean “still” as well as “now.” The song was composed by a woman called Lijon, who well remembers the day that Castle Bravo shook her island: it was the day when she should have been celebrating her 8th birthday. The song, written in 2008, is made up of Lijon’s questions, and nothing is more poignant than the fact that it’s still necessary for her to ask basic questions about her medical care more than 50 years after the disaster.

There is a short clip on YouTube of Rongelapese women singing 177, but obtaining any recorded music from the Marshall Islands proved to be no small challenge. I’d read about a CD called Moonlight Leta Volume 1, and some time later I discovered that copies were available from the Bikini Atoll Online Store. It took the CD another three or four weeks to make its way across the world, so it was really quite exciting to receive it!

The man responsible for putting the CD together, Scott Stege, is an American lawyer who’s lived in the Marshall Islands for several decades with his native-born wife. He loves the gentle harmonies of Marshallese stringband music that was popular back in the 1970s before the stringed instruments were replaced by electronic devices. In 2002 he was contacted by the ambassador to China, no less, who wanted to obtain a tape of old stringband music to represent Marshallese culture. So he went to the radio station to see what he could find. He found that the radio station did indeed have a lot of this music, but it was all on reel-to-reel tapes in varying condition, and the radio station no longer had any equipment that could play them.

So the idea of an audio preservation project was born. Stege took possession of the tapes, recruited a recording technician and got straight to work. He formed a Marshall Islands Music & Arts Society, and started up a radio show, which he called Moonlight Awa. Better-quality recording equipment was needed; they would have to wait some time for this but eventually funding was secured from UNESCO and the United States Ambassador’s Fund for Cultural Preservation. While the radio show had been on air, “$15 ukeleles literally swept the islands youth movement and provided a great boost to youth music,” so Stege’s expanding team also made it their task to record new young ukelele groups from Rita, Mieco, Delap and the Small Island communities.

Moonlight Leta Volume 1 contains 17 digitally remastered stringband “classics” from the radio show archive from 1975–1984 and six more recent recordings of ukulele boy bands. The most addictive melody on the CD comes from one of the new recordings. Here’s how Stege introduces it in the liner notes:

“We first came upon the Small island Boys one night returning home after our weekly radio show. The boys were in full swing, practising their steps out in front of Janes store at Small Island. The song was a real show stopper: Picking up the Bolok in Ma (breadfruit leaves). We invited them to record that same week and, as they say in the business, the rest is history.”

About the author: Nick Wall studied English Literature at Cambridge University. Ten years ago he started a music blog which evolved into the Around the World in 575 Songs project. Nick carried out the entire research and writing of these books while working full time in Liverpool as a civil servant.