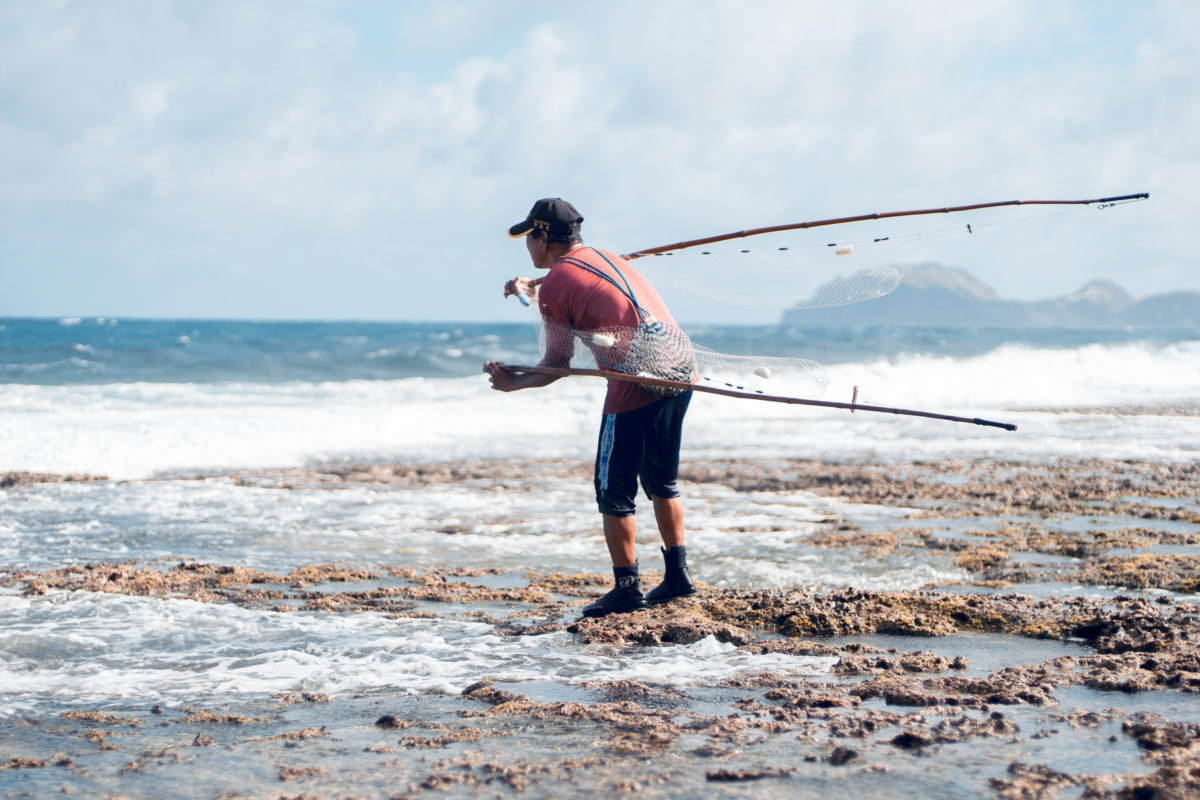 A Lanyu resident uses a traditional net to catch fish near the nuclear storage facility in the south of the island.
ASIACOMMUNITYTRAVEL
·8 min read

Ponso No Tao: The Island of the People

The boat lurched sideways as a wall of water crashed into the hull, huge swells surging upward creating momentary craters of water that threatened to engulf the ferry at any moment. Mortality felt ever more tangible as a dark and angry piece of the Pacific colluded with the storm clouds above to buffet our vessel for a full two hours before a glimpse of land began to appear on the horizon, and for most of the crossing I began to question how I had come to decide that travelling by sea was safer than the tiny eight-seater plane that would have completed the journey in a brief 20 minutes. For these are the only two ways to reach Lanyu, the last outpost of Taiwan to the east, a small, remote, and volcanic lump of rock bravely standing between Asia and the Pacific Ocean.

There are two vessels a week that make the journey from Fugang Port in the southeastern Taiwanese city of Taitung, to Kaiyuan harbour, the main settlement on Lanyu, or Orchid Island as it is known in English. The planes run twice a day, and all are popular with holidaying urban Taiwanese in the high season from March to September. Less so in October, when much of the island’s tourist infrastructure closes down, and the typhoons and associated weather patterns that sweep through the area during this season make the crossing either impossible or unbearable, as I came to realise soon after stepping on board. Alongside me islanders sat disinterestedly as the vessel tossed us to within an inch of a watery death, occasionally reaching out a hand to absent-mindedly check their phone.

In many ways, it is the typhoons which have given shape to Lanyu and its people, the Tao. The winds themselves are the sculptors of the island’s eight statuesque peaks and the foliage of the exposed east coast stands bent in permanent submission to this deadly force of nature. Driving a motorbike from the protected west side and emerging onto the northern tip of the island even on a relatively calm afternoon as it had become when I finally disembarked, the squalls are frighteningly powerful, and it is no surprise that there are little signs of habitation on this violent and angry stretch of coastline.

Yet the inhabitants of Lanyu have found an extraordinary way to endure the intense weather, building homes into the surface of the hillside with roofs flush to the slope so as to avoid the ire of the typhoons which roll over the terrain. Complex irrigation networks running throughout the villages channel the accompanying torrents of rain toward aqueducts which in turn flow back down toward the sea. Ingenious as these homes may be, they are extremely cramped, and I crawl on all fours as the owner of one such property leads me through the entranceway of her century-old house.

Once inside the subterranean wooden space is just as confined and we kneel together as she regales me with a brief history of her home. Mounted on a beam running along the meter-high ceiling above us are the ancient skulls of long-dead game, boars slain by our host’s ancestors who built the structure before the Tao had any contact with the outside world. The room in which our introduction takes place is technically the bedroom, but doubles up as a living area and hallway, a multi-purpose space just large enough for four people to lie side by side.

Yet the family who live here need not now endure such intimate living conditions, with younger generations having used the money earned from tourism and government stipends to build spacious structures of concrete with multiple floors and ocean views, strong enough to stand defiantly in the face of gale-force winds. Like many other aspects of life on Lanyu, traditional ways of living are in retreat. Through a tiny opening at the back of the space is a kitchen which, despite smaller than the room in which we stoop, accommodates two separate stoves and two distinct sets of utensils; one for the cooking of ordinary meals, usually yam, taro or fish, the other for the preparation of the Tao people’s most important catch.

The flying fish season arrives in March, as the Kuroshio current brings huge shoals north from the seas of the Philippines. Their arrival heralds a significant event in the Tao calendar, the flying fish festival, a coming of age for young men replete even today with many of the key symbols of Tao culture. Exclusively male participants don traditional attire, helmets made of bark and loincloths, whereupon they ritually sacrifice a chicken before paddling out to sea in the nailless canoes which have become one of the defining images of the island. The fish themselves are sacred, and the catching of them is regulated by traditions which are spiritual in origin but thoroughly scientific in their principles of sustainability.

The choppy ocean that separates Lanyu from the larger island of Taiwan once allowed the Tao to exist in relative isolation until the 20th century, when the Japanese, who had established a colonial government in Taipei, began to take a scientific interest in the island and its people. Their intrusions were generally limited to academic excursions and the island itself was off-limits to most other visitors. It wasn’t until Lanyu fell into the hands of the Chinese Kuomintang led by Chiang-Kai Shek, first nominally following Japan’s defeat during the second world war and then fully once the KMT army had fled Mao Zedong’s communist forces to establish full governance over Taiwan and its territories, that a conflict began which has shaped the identity of the islanders ever since.

Speakers of an Austronesian language with no Sinitic roots and devoutly committed to beliefs and rituals conspicuously non-Chinese in their practice, the Tao people were among many Taiwanese indigenous people who fell foul of the KMT’s nationalist policies. To consolidate his government’s legitimacy as the true ruling party of a united China and to stabilise his position in exile on Taiwan, Chiang initiated a campaign of sinicisation and nationalist education which mandated the study of Mandarin Chinese and nationalist ideology across the territories under his control.

Interracial marriages were encouraged as an efficient means of sinicising the local population, with many Chinese of mainland origin heading off across the sea from Taitung. But it was the underground homes which proved the most prominent target for the government’s mission; dogmatic, pragmatic and representative of something viscerally non-Chinese. Many were demolished in the 1960s and in their place were erected shoddy above-ground structures which crumbled when the time came for the typhoons to launch their annual assault on the island, leaving their inhabitants exposed and homeless.

This May be the Key to Beating Jet Lag

But this empty victory would not be the end of Lanyu’s struggle with the government in Taipei. In the 1980s construction began in the south of the island on what the islanders were told would be a fish cannery. The reality was more sinister; a site for the storage of the mid and low level nuclear waste by the Taipower company which remains on the island to this day, despite sustained protests from the locals and promises, most recently by president Tsai Ing-wen during her campaign for the 2016 election, that the material would be removed. The issue has been compounded in recent years by concerns that some of the nearly 100,000 barrels of radioactive waste stored at the facility are leaking, following the confirmation of higher-than-normal levels of radiation in the soil.

While distinct from it, the modern history of Lanyu reflects the wider struggle of Taiwan as an island and as a nation, a battle played out in miniature on this tiny landmass surrounded by endless blue. The question of how to resolve an identity crisis forged in the confusion of quickly successive colonial governments with vastly different cultural agendas. For the Tao people, the cultural aspect of this struggle for survival is an easy one to resolve, and through the Japanese, Nationalist, and democratic era of Taiwan today, they have remained steadfast in their adherence to cultural traditions and identity.

The real problem they face is an economic one, as a scarcity of employment opportunities lures the younger generation of Tao to the cities of Taiwan. The population of Lanyu has grown in recent years, but much of this expansion is the result of emigration to the island by young Taiwanese with ideals of a simpler existence, with the Tao and their representation in the island’s demography in decline. Alcoholism is also a problem, especially among older residents, an issue endemic among Taiwan’s other indigenous groups. The fact that the first 7-11 was opened on the island as recently as 2014 with great fanfare serves to underline the lack of development on Lanyu which is both its blessing and curse.

Almost a week after the chaos of our initial crossing we are back on the concrete marina jutting out from Kaiyuan into the sea as a small white ferry bobs up and down against a backdrop of blue. There is a cacophony of voices across the harbour as all but Lanyu’s most hardened residents say farewell to friends and hosts making their way to the tiny port and on to the relative safety of Taiwan’s eastern cities. A typhoon warning has been issued in Taipei, and within 24 hours the still blue of sea and sky will be engulfed by a swirl of fury once more. As the lumpy piece of rock is swallowed by the horizon it is poignant that still now, almost a century since the Tao people’s lives were transformed by foreign incursions into their land, the typhoons still have the exclusive power to drive out intruders such as myself. The Tao themselves call their island Ponso No Tao—the Island of the People—but with the future of their health and culture uncertain, so too is the fate of the island and the unique way of life which it has engendered.

About the author: Laurence Coulton is a writer and photographer currently based in Beijing. His work focuses on east Asian culture and identity, spanning China, Taiwan, Hong Kong and Korea.