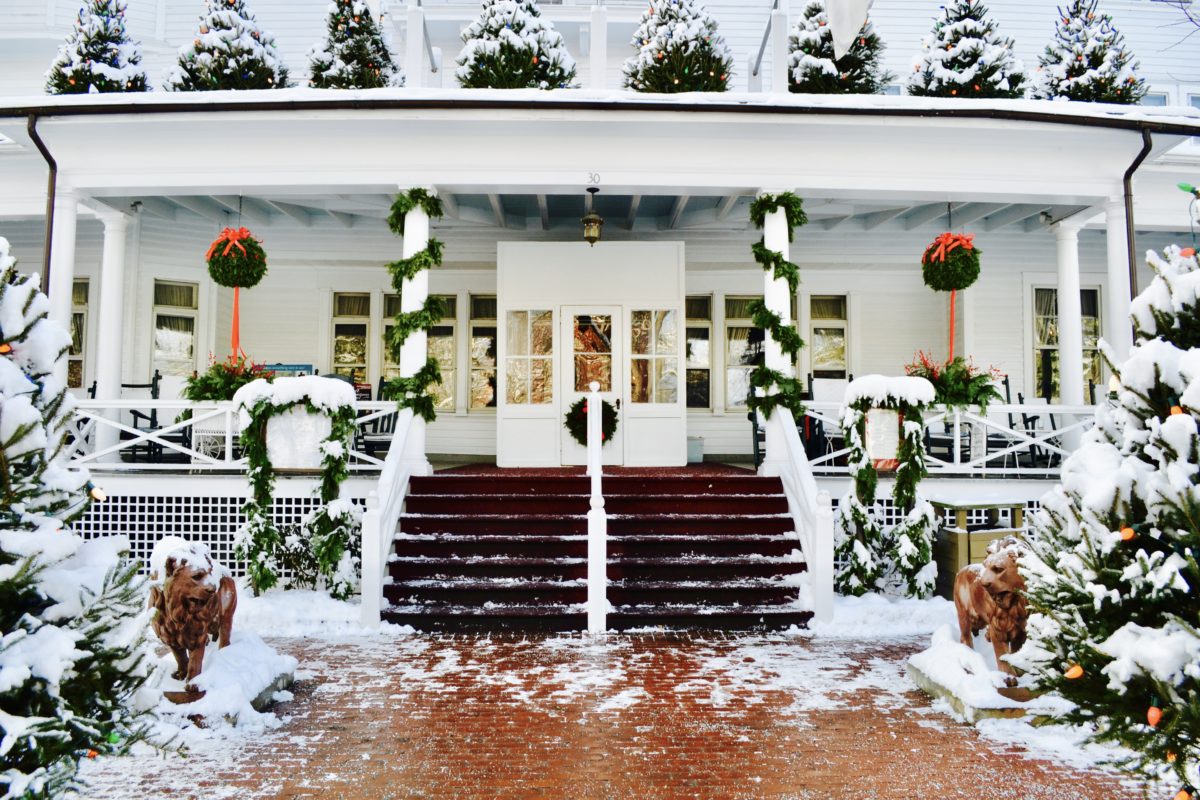 A Very Norman Rockwell Holiday At the Red Lion Inn

The eggnog wouldn’t be here for at least another week—at least that’s what they told me—but when it arrived, I wouldn’t want to miss it—so fresh, so rich, you could almost eat it with a spoon.

On a wintry December evening I found myself sitting at the eclectically packed bar of the Red Lion Inn, scanning the cocktail menu, searching for something seasonal in the very decorated Christmas atmosphere that surrounded me. As the bartender poured me a glass of Malbec he explained that Rhonybrook Farms, from which the miracle eggnog would come, produces such small batches of the nectar that it is only made available to the Inn for a stretch of a few very short weeks around Christmastime, thanks to a connection between the Rhonybrook family and the Inn’s Executive Chef. My timing, it seemed, was my downfall.

A few sips into my glass of wine and I forgot about the eggnog, so deep into the spell of the Inn’s nostalgia was I. The Inn, a landmark in the town of Stockbridge, Massachusetts, is at once a throwback to the days of the Berkshire hamlet’s most famous resident, Norman Rockwell, and its glorification of small town America, complete with Main Street shops and delis so picture- perfect it’s almost hard to believe. Yet it’s also a throwback to a far-older America and all the needlepoint and fabric clashing that comes with it. And further still, it’s an ode to something greater, something more lively and more diverse and more rooted in the spirit of the Berkshires today. The living room is one testament to this mix—where locals blend with hipsters who drove up from Boston and New York and kids run wild escaping from large family reunions, while buttoned up couples dine in the formal restaurant, while retires read by the fire, and a couple of guys drink beers by a Christmas tree. 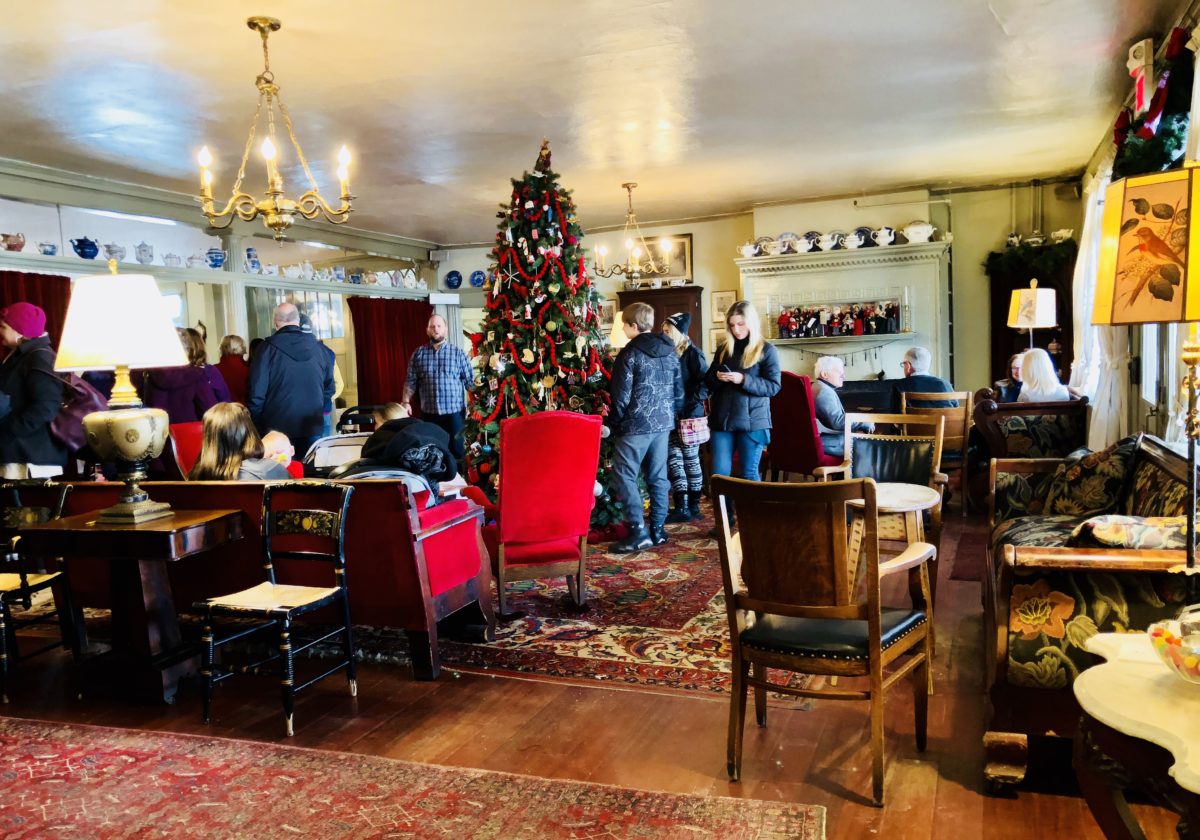 My weekend at the Inn coincided with the first snowfall of winter and all life outside the already sleepy Stockbridge streets had come to an almost immediate halt. Somehow that hardly mattered. Inside was were the life was, with a sprawling dining room that poured into a bar and downstairs into the dimly lit Widow Bingham’s Tavern where local musicians made their way through the snowstorm to deliver a combination of folk, rock, and Christmas songs with slight apology. The living room was bursting at its seams with more than a few families forgoing more adventurous outings in favor of the fire and a book. A glass bowl stood perpetually full of rainbow colored gumdrops. Somewhere a cat snoozed in an armchair. It was, quite frankly, a scene right out of a Rockwell painting. 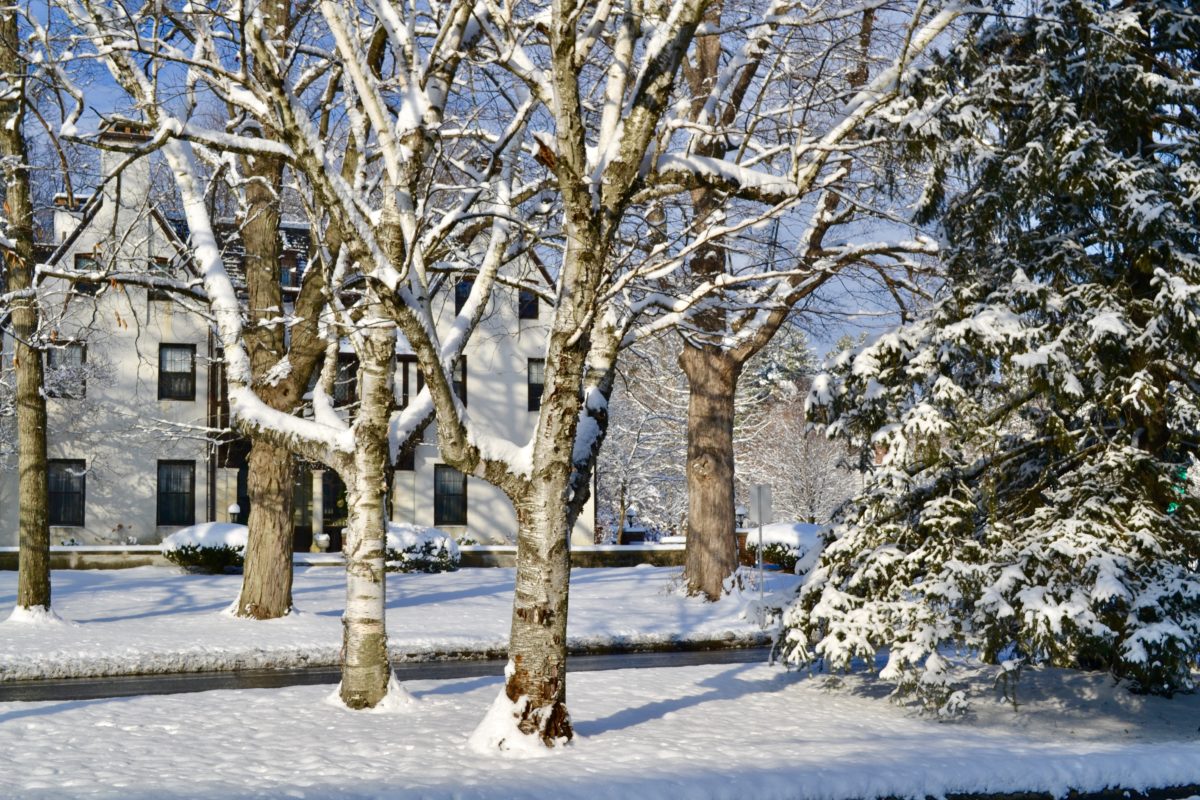 The Red Lion opened its doors long before Rockwell’s day, back in 1773 when a man by the name of Silas Pepoon opened it as a two-story tavern. Legend has it that a red lion was featured on the inn’s sign since the beginning although it didn’t become its official name until the 1890s. From the Civil War through the middle of the 20th century the Red Lion was owned by one family—the Plums—who filled the property with antiques collected throughout New England. Many of which still exist in the guest and shared rooms today, having survived at least one fire (in 1896) in their lifetime. After many iterations and expansions, the Red Lion remains one of the last of the 19th century hotels still in operation in the Berkshires, and one of the last hotels in America the has remained in continual operation since before 1800. The Inn retains a feel of the old world, somewhere between a British pub and Bing Crosby’s Holiday Inn. If you squint, you might miss the fact that it now has over 125 rooms and that the staff communicates over walkie-talkies and punches lunch orders into computer screens. It’s an elaborate smoke and mirrors game that works.

Perhaps it was the fact that it was the first snowfall of the year, but the air surrounding the Red Lion feels just about magical. Either that or the bliss I was feeling from the couples massages my partner and I had just enjoyed at Seven Salon Spa, literally across the Street. Housed in a century old Victorian, the building previously functioned as a restaurant, and before that, as a funeral parlor, the very place Mr. Rockwell was embalmed. A fact owners Maurice Peterson and Mark Johnson tell me proudly and cheekily. Knowing no one but each other when they left New York City and came to the area over a dozen years ago, the salon is a now a vibrant center for relaxation, and its hard to image a more transformative atmosphere.

Transformative it is—Maurice, an artist, whose series Reinventing Rockwell is a fascinating take on everyday Americana circa 2017, brining Rockwell’s iconic works up to speed on modern conversations on race, gender, citizenship, and identity. Peterson, who publishes as Pops Peterson, has presented twice at the nearby Normal Rockwell Museum and  has received a Civil Rights Award the Northeast Regional Conference on Fair Housing and Civil Rights. He is also the Artist in Resident of the Massachusetts Commission Against Discrimination. Peterson’s work challenges you to realize that there is so much more to this postcard-perfect town than initially meets the eye.

Video: Soul of Sharjah, Capturing the Beauty of the Emirate Capital

Rockwell’s “Freedom of Speech” and “Freedom from Fear”

As Reimagined by Peterson: “What the Hell?” and “Freedom from What”

Back at the inn, blissed out from my massage, with the snow falling, carols playing, eggnog far in the distant future, I mustered the courage to strip down to my swimsuit and plunge into the hot tub placed outside for the bravest of souls. After viewing art in the rooms where Rockwell was embalmed, twenty degrees had nothing on me. After all, there was the promise of a blazing fire, a hot toddy, a warm bed, and a perfect, snowy morning ahead.