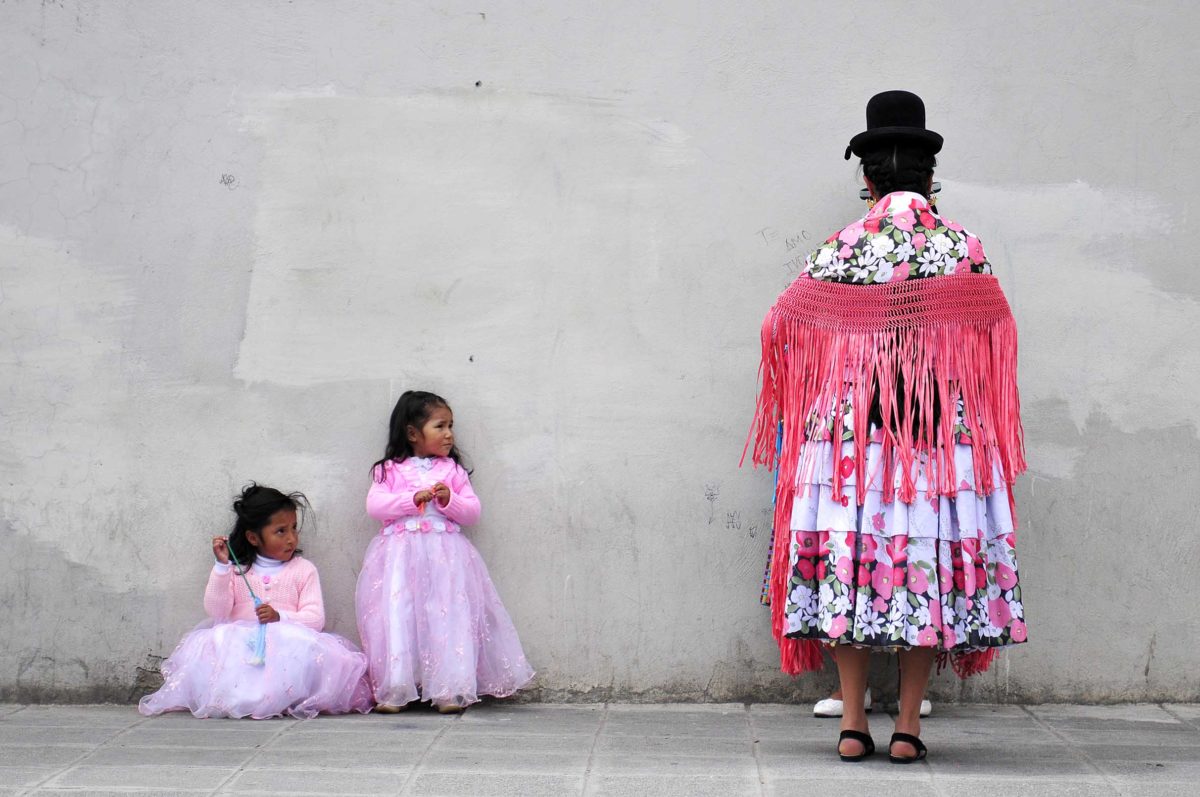 An Ode to the Plazas of Bolivia

Like clockwork, at around 5:30 p.m. my cousins finish their last gulps of coca cola and head out for their usual social routine—dar vueltas por la plaza. Going for a spin around the plaza by foot, motorcycle or car is a necessity in the pueblo of Trinidad, Bolivia, population 101,283. Plazas are the heart of cities across Bolivia, and they hold more importance than meets the eye.

As we stroll to the Plaza 18 de Noviembre, we run into a number of friends and classmates who are heading in the same direction. By the time we arrive, the busy plaza square is a treadmill of teenagers on motorcycles and air-conditioned cars with the windows down. This is the social grounds for friend groups to begin their night of drinking, and boys and girls to exchange a few flirtatious words. As in every city in Bolivia, the plaza is located at the center of the city and overlooked by a pronounced cathedral.

75-year-old Lucho Velarde grew up in Trinidad, Bolivia partaking in the same social activity right under the Lord’s nose. “[The Plaza] has always been the center of gravity of each town. After all, there weren’t many other places to socialize. As a kid, you would bike around the plaza. As you got older, you would go and see your girlfriend there. You’d sit on a bench, talk, and laugh, and so on,” he told me. Movie theaters had yet to be built, and many coffee shops were reserved for the male geriatrics who argued about politics that would outlive them.

In the early 1900’s the social realms of the plaza truly began to form. The conservative nature of Bolivian society dictated that boys and girls were segregated. Sharing the same dirtied white tiled floor, but separated by various coconut trees, boys and girls socialized separately, while stealing glances at each other across the plaza.

Although the young folks have repurposed the plaza as an equivalent to the American mall window shopping, the plaza holds much more of an insight to the developmental history of towns and cities in Bolivia. In fact, they go back as early as the 1600’s when Jesuits roamed the jungles of Bolivia and other neighboring countries to establish Jesuit reductions—a type of settlement strategized by the Spanish Empire to Christianize, tax, and govern indigenous populations. That is why at the heart of any pueblo or big city in Bolivia, there resides a plaza in front of a cathedral. The establishment has clearly left its mark—each morning crowds of people gather before mass. Religious city names are still found mostly across the eastern parts of Bolivia. Western Bolivia has begun to change city names back to words that stem from one of the three official indigenous languages of Bolivia.

Plazas have also served at the stage for the political uproar. During the year I spent in the city of Cochabamba, I witnessed four, two of which shut down the city completely for more than just a couple hours. Miguel Ayoroa, a college student in the city of Cochabamba explains it has now become the norm. “Students from my university San Simon chained school building doors and even shut down the city because they were unhappy with the university system,” he said. “Here in Bolivia, we know how to organize a protest. And it all begins at the plaza.” 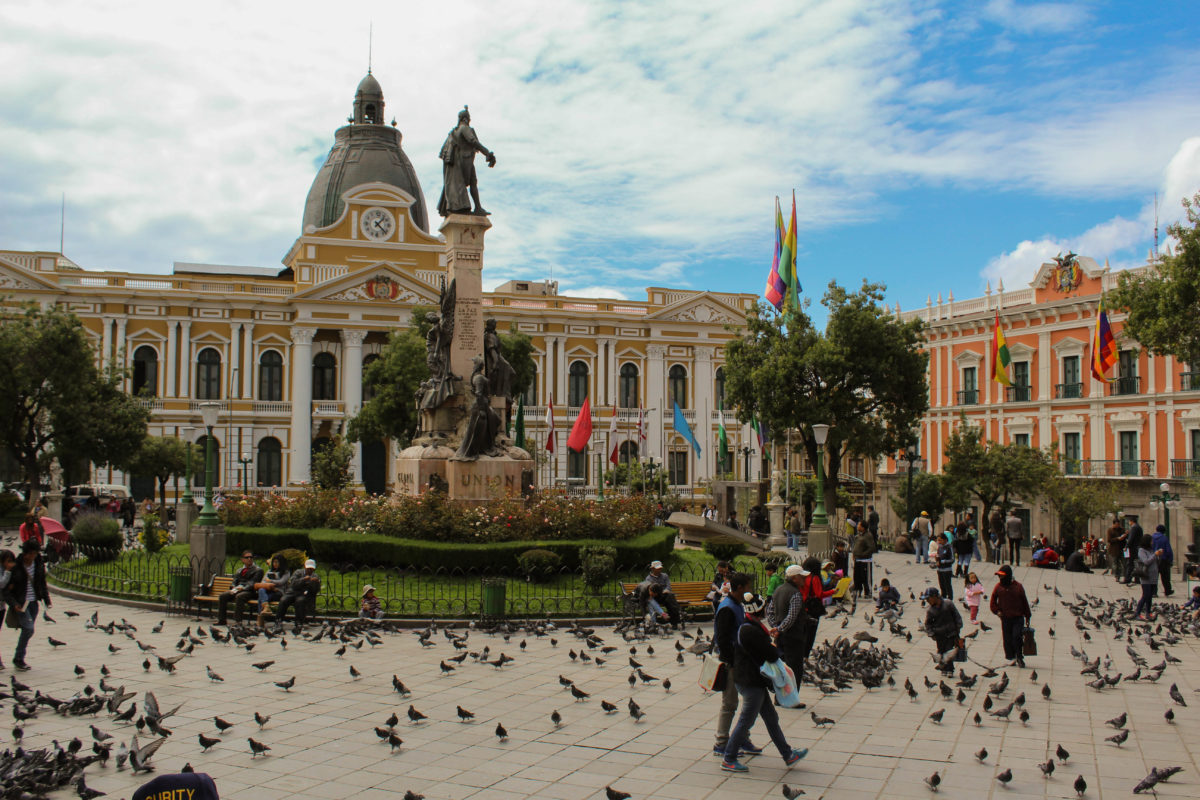 Although many protests in the plazas are state-centric, some have been fueled by international issues. A 2011 protest towards the U.S. Embassy was the indigenous fight to protect coca leaves from the 1961 single convention on narcotic drugs—the framework that governs international drugs policy. Bolivia had argued that the convention was in opposition to its new 2009 Constitution, which obliges it to “protect native and ancestral coca as cultural patrimony” and maintains that coca “in its natural state…is not a narcotic.” Thousands occupied the plazas and streets across the country to chew coca leaf in support of the country’s bid to remove an international prohibition on the age-old practice. Now, the growing of coca leaves is legal and licensed in Bolivia.

A more recent addition to the plaza activities is the traveling artisans that line the white tiled floors offering beautifully intricate pieces of jewelry and home-decor that they have handmade. These artisans came about in the late 1950’s and 1960’s when the Che Guevara social movements emerged. The majority of Bolivians don’t think much of the artisans. However, the plaza serves as the office space for these artisans. These artisans have created a new sub-culture to the plaza dynamic. Many have come from neighboring countries in South America, seeking a new life with their art.

At the center of the city, so many different scenes breakout. With so much movement, it’s easy to retreat and watch it all unfold in front of you. I finally sat down on one of the tattered wooden-benches while observing the artisans weave bracelets, observing the young people coquetear all the while the Holy Spirit observed, or maybe judged. Nonetheless, there is something special about observing the layers of history in front of you, and still contributing to the memories the dirtied white tiles hold.

About the author: Chantelle Bacigalupo is a Bolivian-American storyteller who grew up on Tex-Mex food, Spanglish and late nights dancing to Marc Anthony’s music. Her most recent project, “Blood Roots,” a podcast set to launch in October, explores the endless journey of digging up our collective human roots. Join the conversation at bloodroots.org.