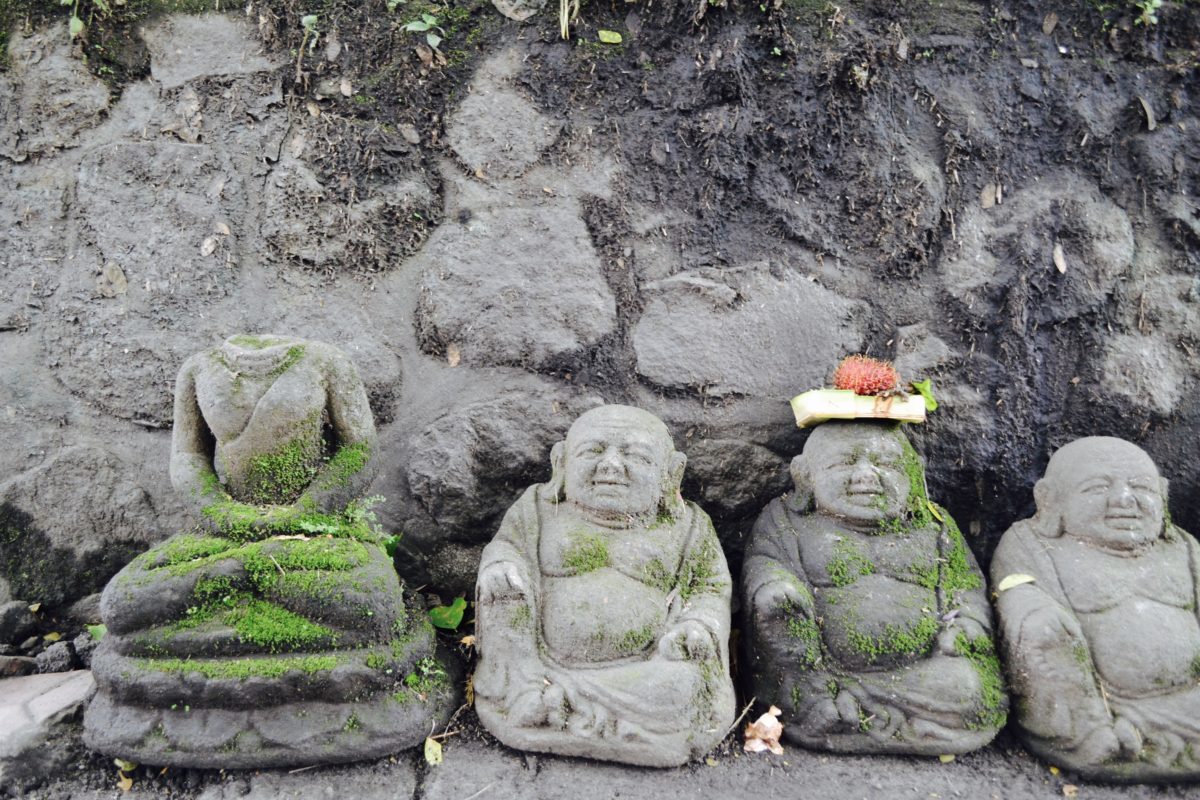 There are few places that exist so persistently in the mind’s eye as the island of Bali.

A small dot in the Indian Ocean, Bali’s fame (and contradictions) is vast. At once a playground of party people, surfers, yogis, Eat, Pray, Love journeymen and women, Bali is also a land of profound spirituality with deeply rooted Hinduism unlike any other strains of the religion in the world. It’s the home of hypnotic dances, spidery puppets, gamelan music, and some of the sweetest tasting fruit to come from the earth. It’s an Eden—but an Eden that’s being paved over, built up, and motor scooted over.

I had come to the legendary island as the first stop on a journey through Indonesia, trying to make sense of the vast archipelago with stops at a handful of islands. In a blur of forty hours of travel, I landed in a haze heavy with humidity, burning incense and the fragrant, ubiquitous frangipani flowers that perfume the island. My first stop would be Ubud, a town know as the cultural center of Bali and a respite from the party-centric south. Recent years have brought a rampant rise in tourism that has profoundly transformed the sleepy hamlet into a spiritual hotspot of sorts. Yet, despite its crowded streets, Ubud has its own allure and a surface worth cracking.

I perched myself at the Viceroy, a stunning hotel just a stone’s throw from the center of town. A slice of serenity nestled high in the jungle and carved right into the side of a steep hill, the Viceroy seems like it has been there for centuries. Antique photographs, teak furnishings, and breezy bungalows ringed by palm trees are the stuff of dreams. . . dreams that play out to the sound of monkeys howling in the night. A paradise unto itself, I could easily not have left this promise of serenity and my private view of the jungle beyond. This is what many pilgrims to Bali seek and here those prayers are answered. Add traditional Balinese massage and fresh watermelon and papaya juice and you will find it hard to leave.

Everywhere in Ubud, people prepare offerings—palm fronds, rice, and the electric petals from the season’s flowers for the day ahead. The offerings litter the town, from street corners to road signs to the steps leading to restaurants. They are small and vibrant reminders of the beauty in this life, the gratitude for its contents, and for the sheer miracle of the color of flowers.

Like many before me, I was drawn to the Sacred Monkey Forest Sanctuary which serves as the main artery of sorts in the town. An overgrown yet cared for swath of land, the monkey forest is home to over 600 well fed macaques (known locally as the Balinese long-tailed monkey). Arrive early, both to beat the crowds and to see the handlers dole out buckets full of sweet potatoes for the monkey’s morning meal.

Off the main stretch of road, tucked into a botanic garden and rice field, I found the Agung Rai Museum of Art. At once a museum, cultural center (they host everything from Ubud’s August jazz festival to painting classes), botanic garden, and hotel, it’s a stunning compound and a spot of quietude in busting Ubud. The museum offers a fascinating collection of works by Indonesian artists with a focus on Balinese painters. Make your way back here in the evening for a haunting performance of gamelan and Balinese dance. The audience is small and the performance intimate.

Bali’s spa culture is rich and the options are plentiful. You are assaulted with choices in the center of town, but for a respite overlooking an neon green rice field, head a bit out from Ubud’s center to Spa Hati where for the cost of a salad in New York you can have a world-class massage and facial.

Ubud’s surrounding areas beckon and the ways to explore the countryside—motorbike, car, bike, are appealing in their own right. However you choose to get there, make your way to Big Tree Farms, a chocolate factory housed in one of the world’s largest and most stunning bamboo structures. The chocolate here is made from cocoa beans grown by more than 13,000 farmers across the Indonesian archipelago. You’ll want to stay for a tour and tasting.

The nearby Setia Darma House of Masks and Puppets is a step back in time with over 700 carefully crafted masks and puppets. The collection is displayed across six traditional Javanese homes, some of which are 125 years old. The grounds are lush, with over-sized traveler’s trees ringing the property. Only a handful of visitors stop by each day making for an intriguing, up-close examination of the culture’s rich tradition of masks and puppets.

Seeking a further glimpse into Bali’s complex spirituality, take an obligatory stop at Gunung Kawi, a vegetation covered temple from the 11th century. One of Bali’s oldest and largest monuments, the temple seems to emerge from the rock face, prompting you to wonder if nature intended it that way. The mesmerizing Tirta Empul is just next door. Erected in AD 962, the twelve holy water springs, in which to bless and bathe, are believed to hold magical powers.

Weary of Ubud’s congested streets I traveled west to Canggu, a stretch along the Indian Ocean that has emerged on the map as Bali’s newest it town—just don’t tell anyone. Canggu is a far cry from Ubud. This is modern Bali at its most appealing, where surfing is king. Accessible breaks and sky-shattering sunsets have made it a magnet for an international set, who’ve moved past the madness of Kota and Bali’s original beach spots.

Besides from the beach and old-timey surf bar, Old Man’s and newer, hipper establishments like The Lawn, Canggu’s heart lies at Hotel Tugu Bali. The hotel is an exquisite establishment by Indonesian art and antiquities collector, Anhar Setjadibrata who has made it his personal mission to celebrate, preserve, and display the legends, art, and beauty of Indonesia through his hotels. Part art museum, part boutique hotel, Hotel Tugu dives into the soul of an old Bali. The hotel’s bungalows and assorted buildings—many of which are antiques themselves—serve as a mini displays of Indonesia’s history with priceless pieces lining the walls.

Setjadibrata began collecting art and antiques as a 25 year old, traveling to villages throughout Java, Bali, Nusa Tenggara, West Timor, Kalimantan and Borneo. Motivated to save and preserve pieces of Indonesia’s history that were being tossed aside, his collection evolved to what is now one of the largest private collections of art in Southeast Asia.

“I never thought of collecting for profit,” remarks Setjadibrata, “I was only thinking of a way to save these treasures because they are related to Indonesia’s history, a part of history that I can touch and feel.” After years of collecting he says, “[I] began to realize that my collections must no longer speak only to me, they must also speak to all mankind as a symbol of my country’s rich history and cultural heritage.”

Twelve years later he opened his first antique-filled hotel. In addition to the hotel in Bali, Sethadibrata now owns hotels in Lombok, Java, and a few outstanding restaurants in Jakarta.

The rich culture Setjadibrata sought to preserve is alive at Hotel Tugu. More than anything, it’s a center that gets to the soul of a lost Bali that stands as an intoxicating antidote to the tourism the island has both enjoyed and endured. Among the Bali property’s collection are guardian statues from the 12th century, a 150-year-old wooden well, an immense 19th century marble table, and a 19th century meeting room decorated with royal antiques and other works commemorating some of Bali’s most notable figures. Add the luxury of private garden courtyards, bathrooms with windows opening onto carp ponds, cocktails make with the local spirit arak, and it’s irresistible.

Trying to understand Bali in one visit, is like trying to understand the desert through one grain of sand. Yet no matter where you stay, or for how long, Bali will slowly unfold some of its mysteries. The rice terraces may glow green in your memory and the surf’s waves might keep pounding in your blood. Like many truly life-changing places, you don’t realize its effect until you’re gone. It’s all part of the same story, and one that’s worth reading.