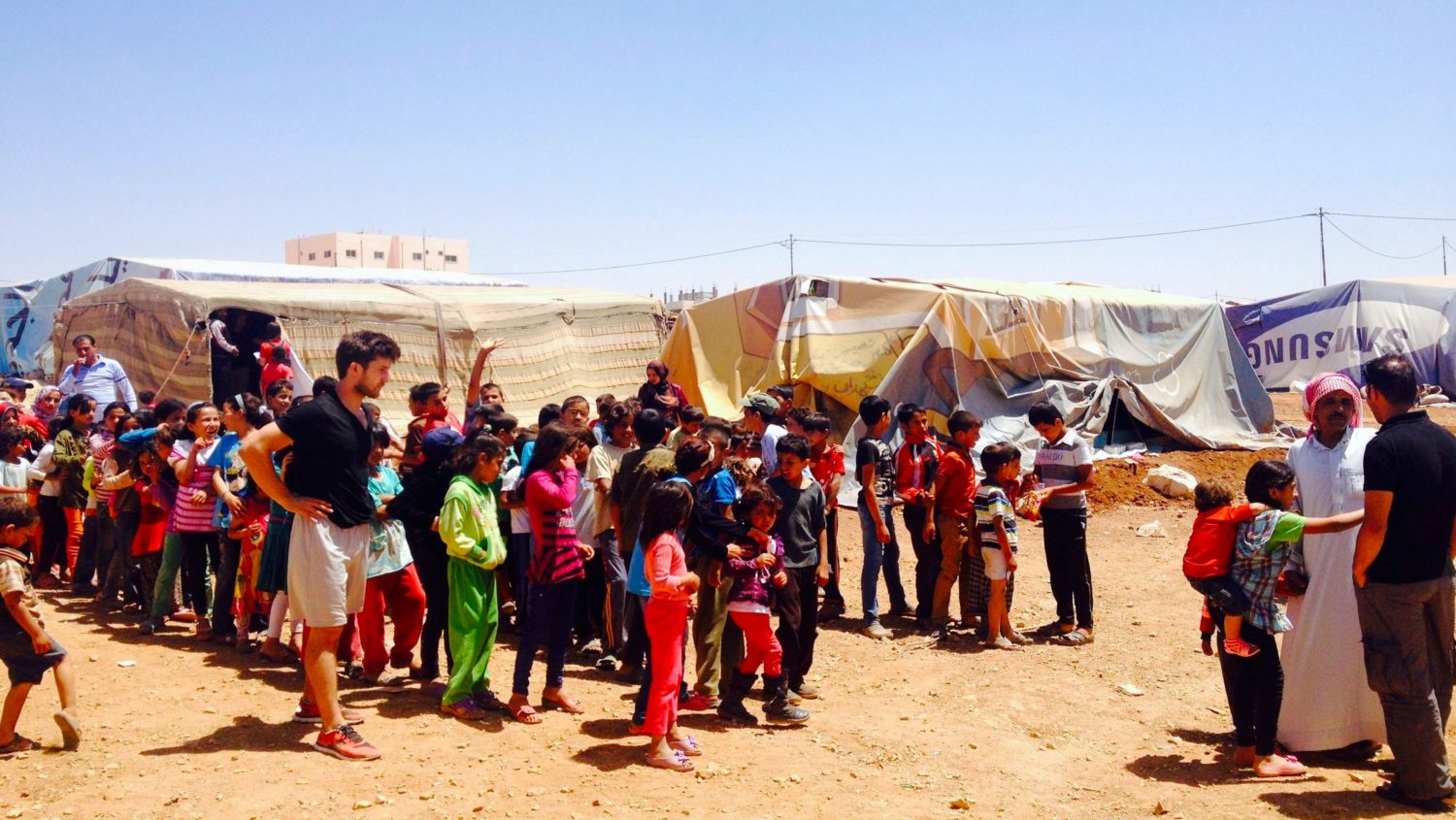 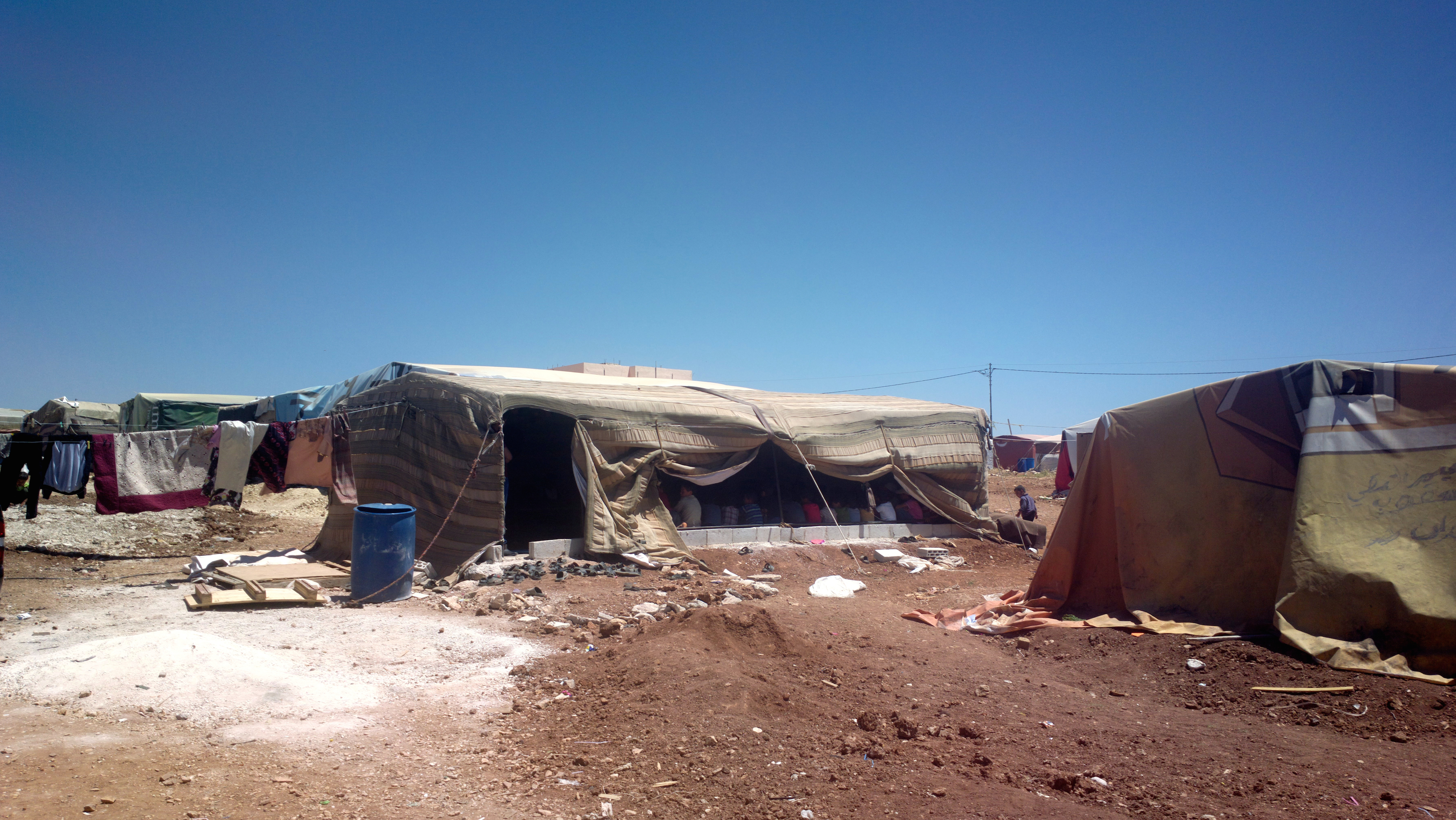 The car goes down a small hill just 45 minutes south of Amman and in front of us opens a view of a wide field with hundreds of tents. The site is desolate—it’s dusty, windy, in shades of brown and grey with no vegetation. This is one of the many Syrian refugee camps in Jordan.

As our car pulls in the camp, there seems to be nobody around. Only a sea of tents, some clotheslines between them and a few odd satellite dishes. But it turns out the place looks deserted only because of the timing: the June sun at 1 PM is relentless. Little by little the children start coming out, curious about the visitors.

I’m with a group called Clowns Who Care from Dubai. They’re comedians and performers, who believe in the healing power of laughter. They take on charity projects such as visiting an orphanage in Uganda or raising money for underprivileged children in Bangladesh. Now they’ve come to this small refugee camp to provide its estimated 300 children arts therapy for two full afternoons. 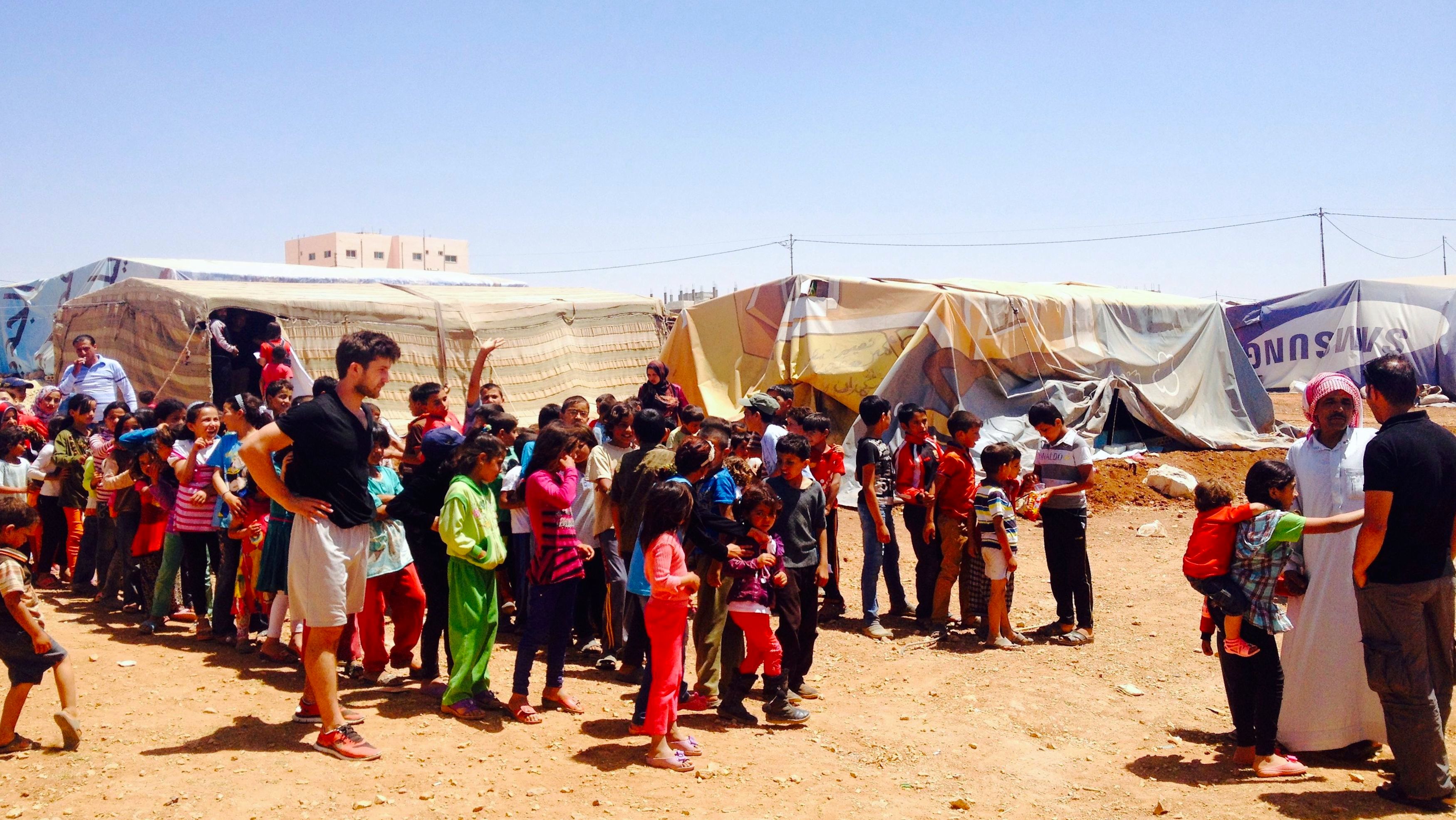 The founders of Clowns Who Care, a talented Emirati-American couple, are in charge of the music and performing arts section of activities. I was invited to join by a good friend, who has performed with Clowns Who Care, and who runs her own theater group called Star Too in Dubai. She is organizing the arts and crafts, has a precise plan for each activity and tons of supplies. My task, alongside a few other volunteers, is to help orchestrate everything.

As we’re waiting for the activities to begin, I suddenly I feel someone snatch my right hand. A little girl is holding it with big smile on her face. We don’t have a lot of mutual words, so we smile. Immediately after, another, an older girl of maybe eleven years, takes my left hand. They appear to be sisters. And so we walk hand in hand, only to separate the grip momentarily when we play some song and dance games in a big circle, while the spaces for the activities are being picked.

Soon there are many other little girls wanting to hold hands with me, some smiling, some with incredibly sad eyes, but it’s impossible to fulfill everyone’s wish. Judging from their reactions, not getting their wishes fulfilled is no news to them. 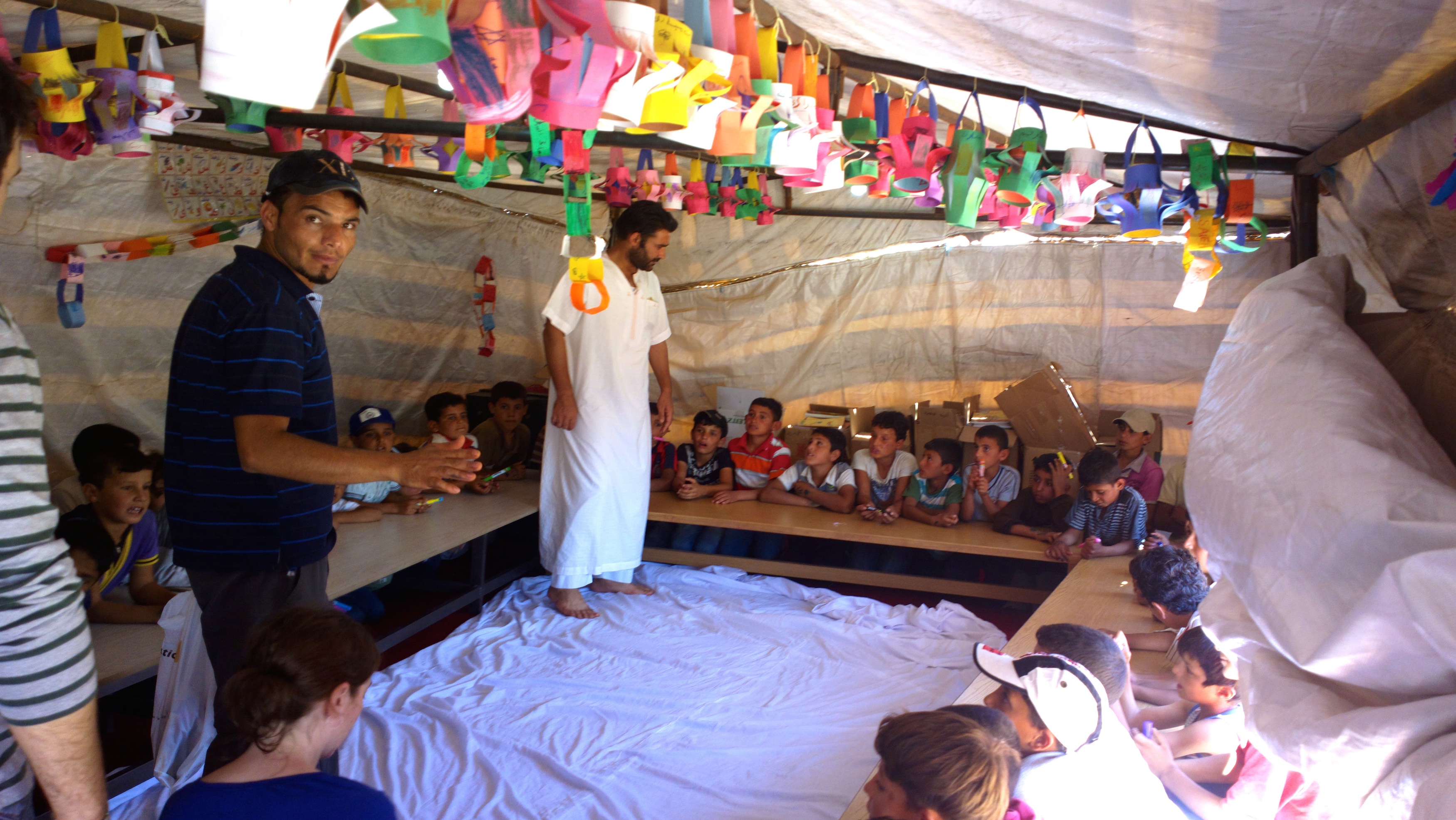 The camp is not the biggest in Jordan. I was told that it hosts only one tribe, who escaped the violence in Syria together. In 2014, they had already lived on this inhospitable plot of land for a year and a half, with no running water and hardly enough to eat. They have a few goats, some plants in old olive oil canisters and the odd few satellite dishes. While the latter might seem an out-of-place luxury at first, it’s also easy to see how a TV can be a priority in lives that comprise only of waiting.

We start in the school tent with the older girls. There is a division: girls the first day and boys the second. The young Mercy Corps volunteer, who has worked in the camp as an English teacher for a while, tells us that the boys understand they have to wait until the next day: it was a common practice with their activities, too. Mercy Corps also brings in volunteers to play with the kids every now and then, mostly expats living in Amman.

The rotation of groups of girls according to age isn’t as easy as we had thought. There aren’t enough Arabic speakers to explain the system so at one point we have about 70-80 girls in a small tent all chatting, giggling and gluing crepe paper as decorations on cardboard hearts. The planned session of an hour and fifteen minutes turns into three hours with more and more girls pouring in. While the day is quite chaotic and plans change, the activities seem to do their trick: the girls appear to be in the moment and happy. 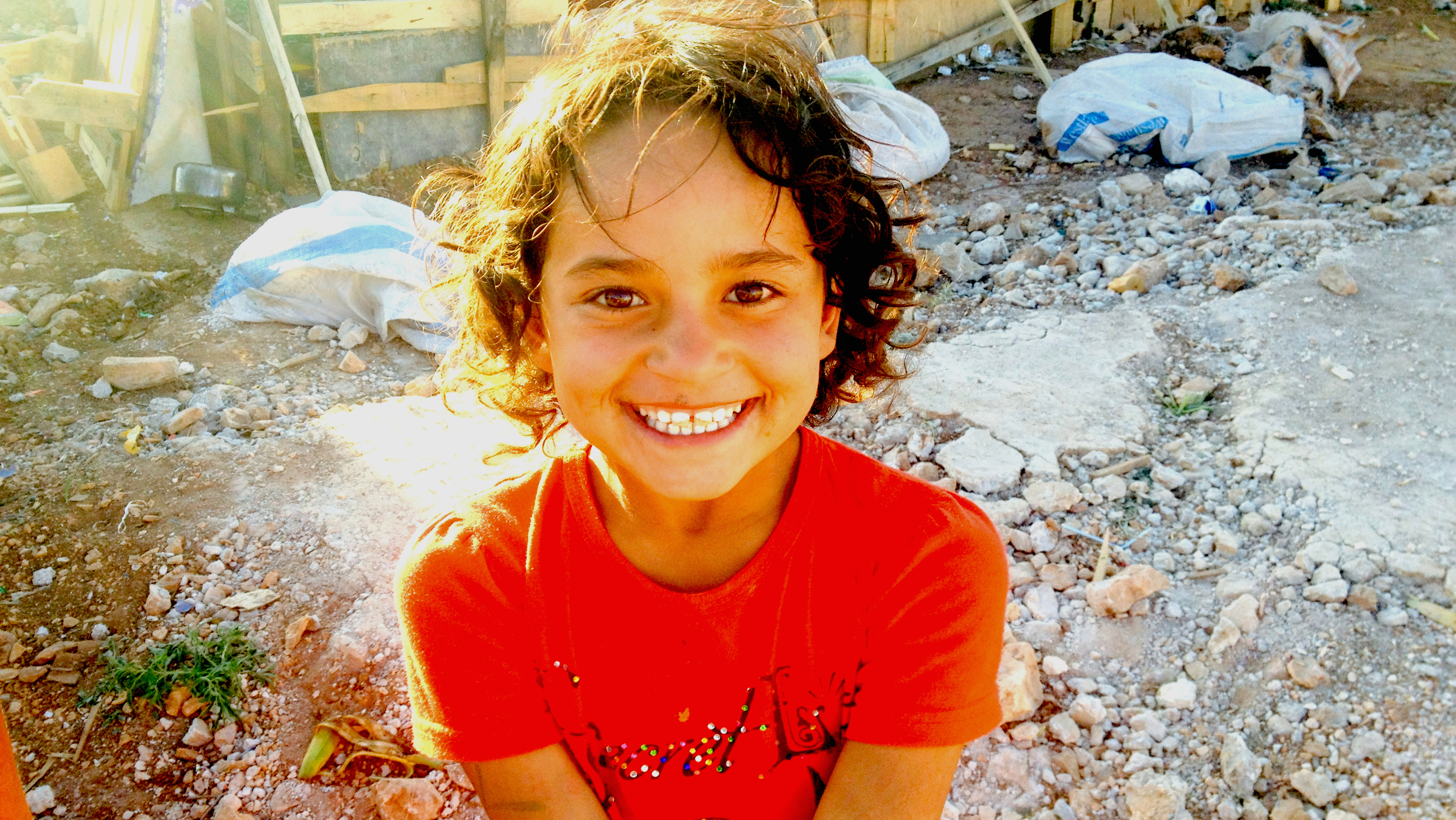 Celebrating Farm-to-Table: A Day With Celebrity Chef Jose Garces in His Organic Garden

Having learned from the mistakes the first day, we ask the camp’s teachers, Syrian themselves, to come help us with the boys. They keep order and explain in Arabic what each activity is about. The boys are enraptured by the simple act of drawing and later by making super hero figures out of tin foil. The sound of 40 boys shaping their figures at the same time is one of my favorite moments of the weekend: the joy and concentration are captured in the pleasant crackling of the tin foil that fills the hot tent.

Our visit was to end with the communal flying of huge parachutes that the children have been decorating. But as we hold onto to giant piece of cloth together, everyone gets too excited and nothing really comes out of flying it: it’s just shaken accompanied by shrieks of joy and laughter.

Clowns Who Care had also planned a final performance, but the kids had learned from the first day that there is a snack at the end of it. Hungry as they are, and as we are nearing sunset, they can’t concentrate anymore and line up for food. Priorities are clear. 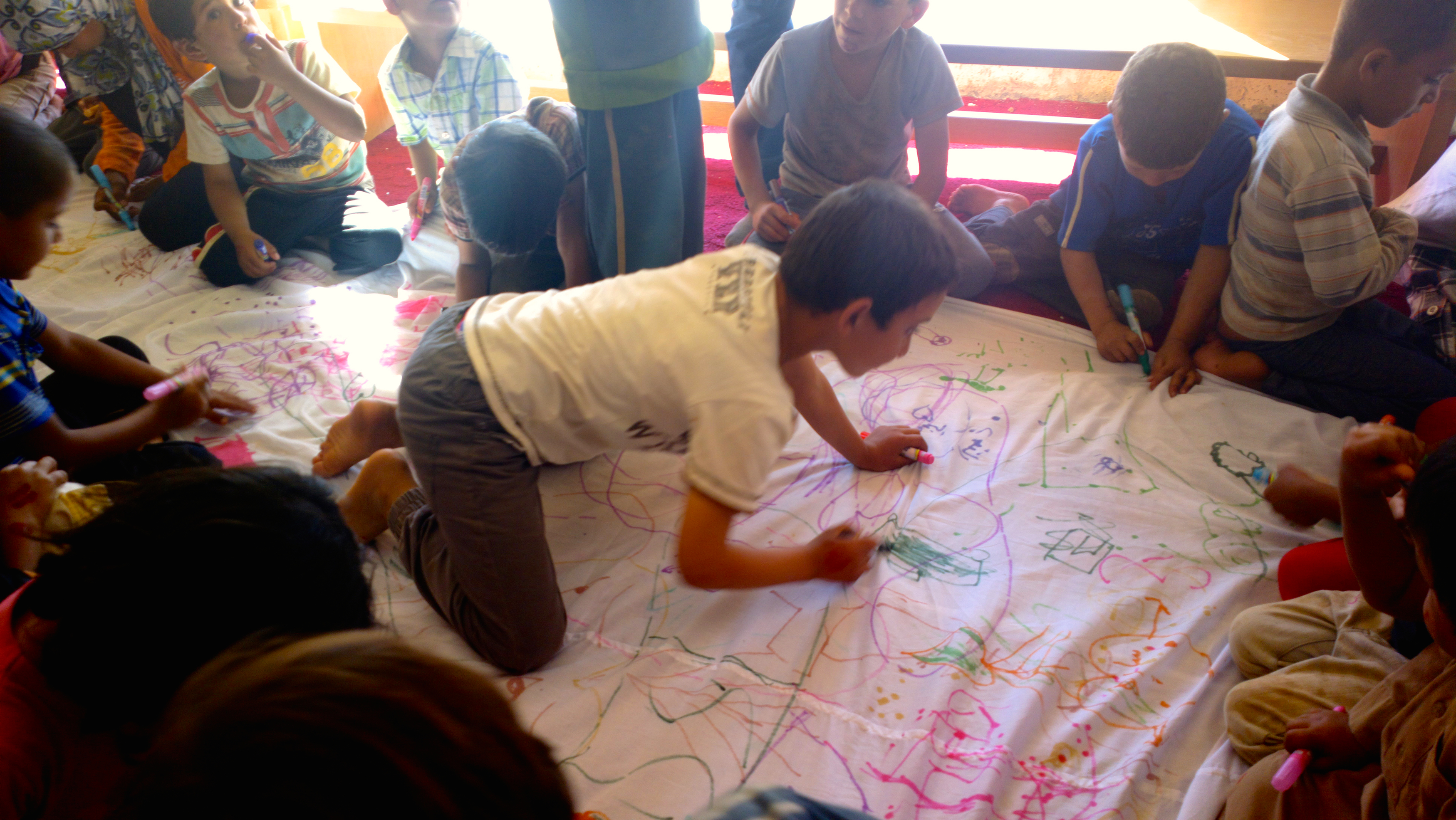 At the end of the second long day of volunteering, my friend and I, after showering layers of dust off, go to a rooftop restaurant in the swanky Shmeisani neighborhood in Amman. We order a nice dinner and some wine.

About the author: Piia Mustamäki is a traveler, a Finn and a New Yorker, currently located in China, where she teaches writing at New York University Shanghai. She’s also the cofounder of 1001worlds.com, a boutique tour organizer to off-the-beaten track destinations.