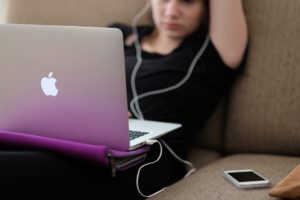 The election season is, mercifully, over, but many women and girls say they won’t soon forget the harsh and sometimes crude depictions of women that surfaced. A one-year-old nonprofit called MEDIAGIRLS is teaching middle-school girls how to understand these depictions—whether in politics or music, advertising and other forms of communication—and advocate for changes. Recently they examined media portrayals of Hillary Clinton and Michelle Obama, as well as “bikini bodies” and tampon ads.

“I’m watching the effects of media on [my daughter],” said Michelle Cove, executive director of MEDIAGIRLS, when asked what inspired her to launch this nonprofit based in Brookline, Mass., in the fall of 2015. Cove, an award-winning filmmaker, author and journalist, has spent three decades working on media projects related to empowering women and girls. “There are many programs like this,” said Cove, “but I wanted these girls to be part of the solution.” MEDIAGIRLS does this in a three-part journey: girls learn media literacy and talk about what messages are being sent, they examine why these issues matter, and they learn how to demand changes using initiatives such as letter-writing campaigns. Since teens spend nearly nine hours a day consuming media, Cove stressed that this work is crucial.

Currently middle-schoolers in Greater Boston can access the MEDIAGIRLS program during after-school hours. It’s taught by a team of Boston University interns who learn the curriculum, teaching methods and managing student behavior over a two-day training period. Clinical psychologists explain to the interns how a middle schooler’s brain works, and speakers instruct them how to interact with diverse populations.

One of MEDIAGIRLS’s former interns, Olivia King, now serves as a mentor for the program and acts as a go-between for Cove and the current interns. King, a social studies education major, has been with the program for three semesters. She says she’s learned just as much about media literacy as the girls have, and the program has been eye-opening for her in regards to how diversity affects the messages that women receive. According to King, a majority of the students in these classes are girls of color.

“One thing we’re really looking into right now is how to tailor the program to make it more accessible to [them],” said King. “We want to be giving them an experience that they can get excited about, so we’re currently working on edits to the curriculum that do not ignore the white ideal that the media perpetuates, but identifies why such a narrow representation is problematic and explains the other ideals girls may feel the need to emulate. Essentially, we want the program to be as inclusive and as powerful as we can be to everyone involved.”

In the past, students wrote letters to a CEO about advertisements that they felt either included strongly negative or strongly positive messages. This semester, MEDIAGIRLS participants are focusing on writing letters to pop stars about music lyrics and videos, and also worked with the advertising agency Arnold Worldwide. Arnold employees created ad campaigns for the students to look at, work with and deconstruct. They also participated in Media Literacy Week with posts tagged #xomg (which stands for XO, MEDIAGIRLS). In May 2016, MEDIAGIRLS was one of 15 nonprofits in the Boston area chosen to be a Power Launch Fellow. It came in second place and received $17,000 in donations. In September, MEDIAGIRLS became a 501(c)3. It is now teaching programs at five Greater Boston sites with the help of 15 interns, and plans to add two additional sites in the spring.

The MEDIAGIRLS programs have already begun to have a positive affect on the students. Former students have continued the work after the program’s end—whether by starting a kindness club at their school, submitting to feminist essay contests or starting their own websites. King has also noticed that students have a lot to offer the program as well. When talking to students about diversity in the media, she said she realized that “they were very aware that large groups of women—women of color, women with disabilities, the LGBTQ+ community—have been excluded from mainstream media.”

Cove and the MEDIAGIRLS team hope that with the additional strength in numbers this semester, the students will see results in the form of changes to the media.

“It’s really important we teach girls to question, challenge and even reject media,” said Cove. “The real power comes from doing something about it. They are part of the change. The more girls that take part in this, the faster we’re able to grow that change.”

Alaina Leary is a native Bostonian currently earning her M.A. in publishing and writing at Emerson College. She’s also an editor, writer and social media manager. Her work has been published in Cosmopolitan, Seventeen, Marie Claire, The Establishment, BUST and others. She can often be found re-reading her favorite books and covering everything in glitter. You can find her at www.alainaleary.com or on Instagram and Twitter @alainaskeys.