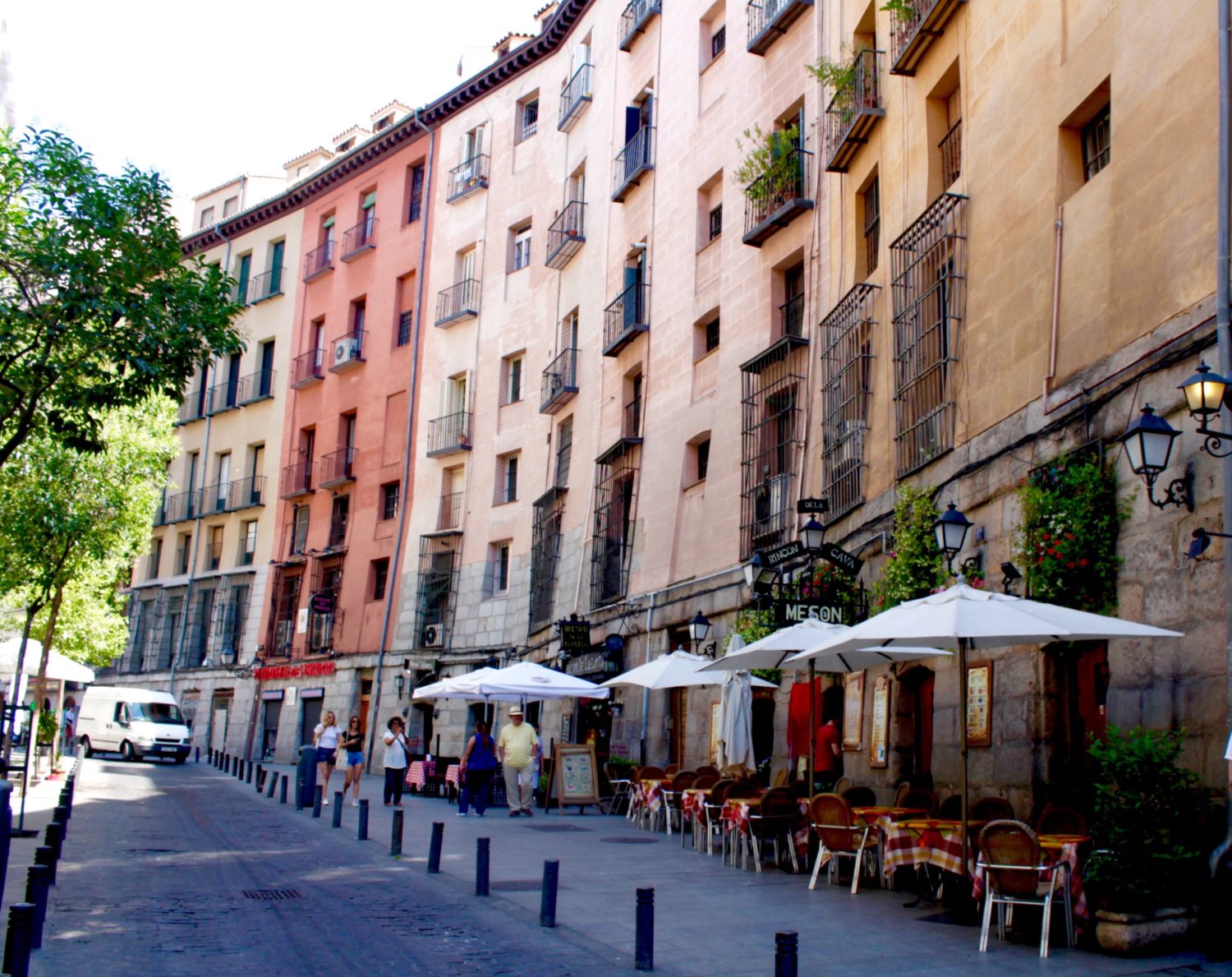 A Guide to the Neighborhoods of Madrid

One of the best parts of living in Madrid is becoming familiar with its many unique neighborhoods. The city is like a gigantic jigsaw puzzle, and the barrios are the pieces that somehow fit together just right. Each one brings a little something different to the whole, making Madrid the fascinating city it is. In fact, it sometimes seems as if getting to know the Spanish capital is like getting to know ten cities in one- and it’s never boring. Even after living there for two years, I still felt like there was so much left to discover in each different barrio.

Whether you’re moving to this vibrant city and deciding which barrio you’d like to call home or you’re just planning to visit Madrid, this brief guide to the city’s neighborhoods should help provide a little idea of what each has to offer.

The streets winding between Plaza Mayor, Puerta del Sol, and up towards Gran Vía are the liveliest of the city. Classified as the “centro” or city center, it’s the most touristic area in Madrid. Here you’ll find several of the iconic scenes depicted on most Madrid postcards. While the area can get quite crowded during peak times for tourism, it’s still a lovely place to people watch while sipping a café con leche or a tinto de verano at one of the many bars in the center.

Overlooking Gran Via from the Tartan Roof Bar

As one of the oldest parts of the city, barrio La Latina is the definition of traditional Madrid. It’s the place to go for cervezas and tapas, great Spanish food, and an authentic atmosphere. Getting lost in the neighborhood’s old winding maze of streets is a pleasure.

For good food and even better local atmosphere, go to Calle Cava Baja, the La Latina street famous for its beautiful taverns and traditional tapas bars.

And after a Saturday night out, check out Madrid’s street market, El Rastro, held every Sunday morning in barrio La Latina. Here you can find plenty of affordable souvenirs (and just about anything else) while honing your bargaining skills.

Lavapiés is probably the most unique neighborhood you’ll find in the city. Although it’s just south of the center, about a fifteen minute walk from Sol, Lavapiés isn’t touristy at all. It’s a bit off the beaten track, yet absolutely worth exploring. This colorful barrio is known for its multicultural atmosphere. Here you’ll find an eclectic mixture of immigrants and expats from all over the world. While it’s still thought to be one of the edgier areas of Madrid, recent gentrification is rapidly changing the neighborhood. New bars and cute cafés seem to be opening almost every day in Lavapiés.

And if you’re looking for good Indian food, Lavapiés is the best place to find it. Calle Lavapiés, the main street stretching downhill from Plaza Tirso de Molina to Plaza Lavapiés, is lined with Indian restaurants whose employees aren’t shy about competing for business (I recommend Shapla).

Another plus? In this barrio, you can find several convenience stores selling all the spices and foreign ingredients that are otherwise quite difficult to track down in Spanish supermarkets.

Between Plaza de España and La Latina lies Madrid’s Cathedral and Royal Palace. A walk through this district of the city center offers gorgeous views of the palace and, on clear days, of Madrid’s mountains in the distance as well. It’s also home to one of my favorite parks in Madrid- Parque del Oeste. This beautiful park is a popular spot to see the sunset and enjoy some of the most beautiful views in Madrid.

Views atop the Almudena Cathedral

Malasaña is often referred to as Madrid’s ‘hipster’ neighborhood. It’s where you’ll find some of the best bars, cafés, second hand shops, bookstores, and brunch spots in the city. It’s also the place to go if you want to experience the infamous insanity that is Madrid nightlife. On some weekends, bar-hoppers and partygoers flood the streets until as late as four or five in the morning.

For good reason, Malasaña is also one of the favorite neighborhoods among expats. It’s a very popular place to live for both young Madrileños and foreigners alike. The eclectic neighborhood has a great vibe with no shortage of things to do and great restaurants to try.

One of the best characteristics of the Spanish capital is how open and accepting it is towards everyone. And barrio Chueca is an excellent example of this acceptance. Lonely Planet describes the neighborhood as “extravagantly gay, lively young, and always inclusive regardless of your sexual orientation.” Like Malasaña, Chueca is also an excellent place to go out. Besides being known for its inclusivity and vibrant nightlife, it’s a lovely neighborhood to explore with tons of cute boutiques and cafes.

Finally, barrio Salamanca is known as the wealthiest area of the city with a higher cost of living that other Madrid neighborhoods. It’s a beautiful neighborhood, and a bit quieter than rest of the city. Salamanca is also quite traditional, with plenty of cute shops and cafés to explore. If you can afford to live in this exclusive area, perks include being quite close to Madrid’s beautiful Parque del Buen Retiro and many of the city’s world-class museums.

I’m Rachel, an American expat and travel addict with a passion for new experiences, photography, and good food. I’m currently based in beautiful Barcelona where I teach English and spend my free time exploring the world.