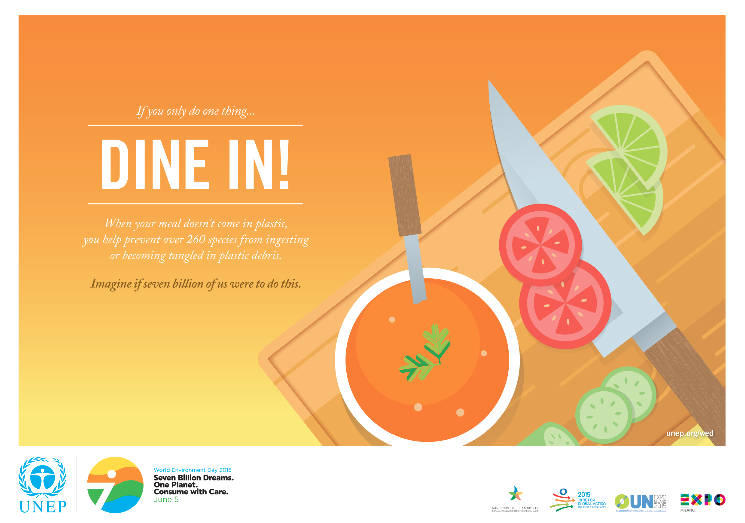 It’s June 5th – World Environment Day, and this year’s theme is “Consume with Care”. Now, that’s a broad subject of talk, but not one that can’t deliver a direct message.

And the (official) message is:

We are constantly being bombarded by the media which promotes consumerism as a desirable social behavior because it is the engine of economic development and job creation. The passion for consumerism and purchasing of goods, however, increases the demand for resources, which are not only finite, but being wasted in the process of increasingly rampant, trivial consumption.

I say (/write) this a lot, but it’s true: don’t underestimate the power of individual actions. Everyday, personal habits can and do make an impact, and the positive ones can succeed in creating progressive movements such as Collaborative Consumption and Zero-Waste.  Social media and innovative tools of communication and organization for advocacy and reach, help spread the message. It’s a change that has to come from within.

What can YOU do on a daily basis? Try to incorporate some of the following suggestions:

Of the total volume of water suitable for human consumption, almost 70% is used for the purposes of agriculture. The importance of water use in agriculture is extremely high; however it is also extremely inefficient and a number of countries are already facing the problem of water scarcity.

Finding a solution for the inefficient use of available water resources, especially in the most vulnerable regions of the world, would greatly contribute to the alleviation of the levels and extents of hunger and scarcity, as the issues are inextricably linked.

As an essential component of our lives and an operative in major activities, energy is vital in the functioning and development of our society. Currently still largely reliant on nuclear power and fossil fuels for supply – which are massive pollutants – the pressure is growing on the energy sector to harness alternative supplies. These includes a number of clean sources – those that don’t produce greenhouse gases such as carbon dioxide and methane during manufacturing or use. Also, clean energy and its sources not depleted by use – thus having the capacity to be naturally replenished – are viewed on the market as a valuable commodity, even though they are free and free-flowing all around us from water, wind and sun.

Several critical dilemmas burden our planet at the present time, such as insufficient alternatives for both sustainable and affordable energy, especially excessive costs of their implementation and the period before the businesses start seeing and registering profit. The competitive industry is concerned with new ways to exploit, capitalize on, and efficiently distribute alternative renewable energies across various fields and regions.

Mapping out the world food situation and the challenges of the future of agriculture on a global level requires analyzing factors that determine the growth of agricultural production for the growing population and its nutritional needs and demands. The food situation affects, and is affected by a large number of other issues, such as climate change, the use of crops for the production of agrofuels, and economic and political market correlations. As such, there are significant political implications in the control of production and trade of food, making it a politically powerful instrument.

The 2006-2008 events have revealed the vulnerability of the world when dealing with the inefficiencies of its food production. The economic recession rendered food prices volatile, severely limiting some regions’ access to food and resulting in social upheavals and riots.

More on that in my upcoming Food Security post (stay tuned, the link will go be activated once the post goes live). Meanwhile, please read this.