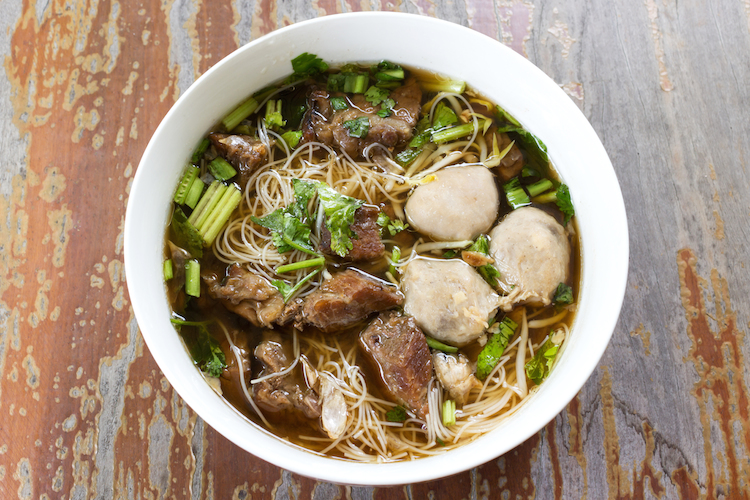 In Vietnam, You Must Network to Eat Well: A Secret Food Stall in Hanoi 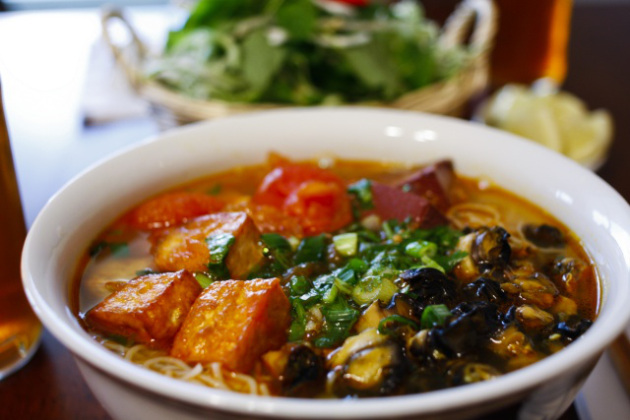 With me on the back of the motorcycle, my brother rode through a maze of narrow back streets sandwiched between rows of houses poking in and out like a set of crooked teeth. He swirled left and right, avoiding bumping into the occasional people, motorcycles and dogs and reached a narrow path along a canal that looked and smelt like sewage. I flinched, between us and the canal was only that one narrow bumpy path. I wondered if anyone has ever fallen into the brownish water, stagnant and stinking of rotten substances.

We stopped at a place that I could only describe as someone’s front yard separated from the view of the dirty water by a single brick wall. My brother signalled me to get off the bike. We walked into the yard and stopped at two giant boiling pots and a table full of ingredients. I caught a mixture of ginger, galangal and turmeric and the distinct smell of crab soup.

“Two bowls of noodle soup with extra snail please, Aunty. And a lot of vegetables too.”

My brother called out to the woman sitting behind the two giant pots. She had a beautiful face, her high cheek bones flushed with heat and shiny with sweat and grease. Her hair was tied up into a bundle, revealing her tanned forehead and arched eyebrows. I smiled and she nodded slightly.

“Just sit down, will be there in a minute,” she commanded, obviously oblivious of the customer service code of conduct.

My brother picked a table near the corner and we sat down on a wooden bench. The table was low and wobbly and I refrained from touching the sticky plastic table cover. Right next to us another woman was busy frying something over an open fire. The pan bubbled violently. Smoke and droplets of fat blended into a rhythmic dance. I caught a pungent smell of deep fried chillies and sneezed.

My brother handed me a pair of chopsticks and I took them gratefully. He reached out to the plastic pot in front of us and rampaged through the bundle of mismatched chopsticks. He pulled out another two chopsticks, examining carefully their length and shapes, testing them in his hands before pulling out a piece of tissue and cleaning them meticulously. To show my respect, I picked out two spoons, cleaning them before handing one to my brother.

The two bowls of noodles soup arrived. The smell of herbs and spices hit my nose almost instantly. My mouth watered. I could almost taste a subtle sweet smell at the back of my tongue.

“Here, don’t forget to put the herbs in.”

My brother pushed the basket of herbs toward me. I picked out a leaf and chewed on it. My tongue felt tingly enhanced by a sweet taste.

“What about this?” I picked up a purple saw-edged leaf. A mild bitterness spread in my mouth, followed by a fresh, almost grassy taste.”

Greedily I grabbed a handful of herbs and drowned them in the broth. I took a sip. A symphony of taste and flavours bloomed. One after another, layer after layer, heat, tang and sweetness came into waves of different dimension and intensity. The sweetness of the meat stock underlined the tang of tomatoes while turmeric titillated the tip of my tongue. I bit into the various substances found in the broth. My teeth emerged themselves in the warm spongy and moist fried tofu, they sunk into the starchy green bananas and crunched on the snails while white strands of rice noodles slipped through my lips. I let out a sigh of satisfaction.

The table next to us was full of rowdy young people who seemed to be engaged in a heated debate over the marriage life of someone they knew. One of the guys swore loudly while the other slapped his leg in approval. I laughed quietly. In this space with low ceilings and pungent with the smell of fried spices, everything was loud and robust. Everything here seemed to scream at you to let go of everything you had been taught about proper table manners. Here you slump over the bowl of soup, tearing, ripping, slurping and savoring every mouthful. Life is too short to be self-conscious.

My brother finished his bowl quickly while I took my time to indulge in every spoonful. I wanted to extend this feeling of culinary ecstasy. My brother commented on how his girlfriend had found this place from a friend of a friend. Here in Vietnam, food stalls like this is like a secret culinary club, only known of through inside information and referral. In Vietnam, you have to network to eat well.

As my brother continued to list other famous places that he knew, I took the chance to sneakily loosen my belt and proceeded to lose myself in another mouthful. The whole universe seemed to dance inside a bowl of broth.