Life Down Under: Australia’s Underground Town 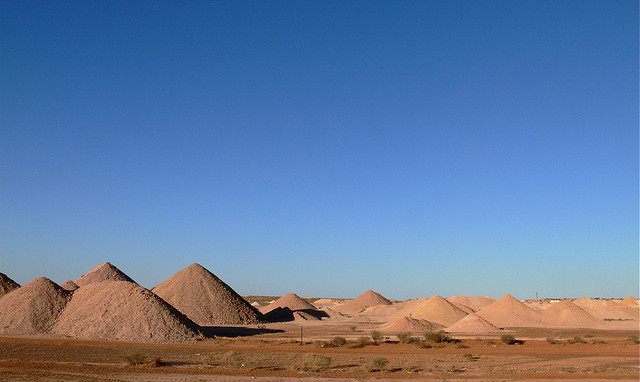 When one first walks into the small Australian town of Coober Pedy, it does not look like a place that would be conducive to human life. The arid scenery resembles an otherworldly landscape, and due to the extreme temperatures, neither flora nor fauna flourish here.

One has to look eight to 22 feet below the ground in order to find the real gem of Coober Pedy, and that’s not just the opal mines that brought humans to this desolate desert in the first place. The residents of Coober Pedy have built their own bustling underground town, complete with two churches, a bar and 1500 family-sized homes with above-ground entrances.

In 1915, miners began to convert the old mines into homes in order to avoid the terrible heat of the Australian Outback. Since then, Coober Pedy has started to rely as much on tourism as on opal mining for their main source of income. Residents have even added hotels, inns and museums to accommodate the influx of curious visitors.

The name of the town derives from the Aborigine word kupa piti, which means “white man’s hole”. The natives gave the miners this name when they discovered their dugouts. Coober Pedy’s current population of 3,500 people still live in dugouts, with all the amenities of a home above ground: walk-in closets, modern kitchens and televisions, etc.

These homes are more than a hole in the ground. One contains an underground swimming pool, and some residents even maintain sand gardens on the surface. Not to mention residents take full advantage of the rosy sandstone walls, which are smoothed and sealed to control dust.

Of course, residents do emerge from their underground habitat to spend some time out in the real world. Coober Pedy is home to the world’s hottest golf course. Like most things about the town, it is an atypical course comprised of a large sand trap rather than grass and pools of water. Golf lovers still find a way to play the game by using glow-in-the-dark balls and dragging around a piece of turf where they can tee off.

Annual events include the Opal Festival and the Coober Pedy Races. The Festival celebrates the end of a long, hot summer with raffles, parades and other outdoor activities that residents can compete in every year. The race meeting has been a tradition since 1969, with the intent of bringing people together from the town and a nearby station.

The town’s unique characteristics have held enormous appeal for filmmakers. It has served as a number of different settings – including the Martian landscape it resembles – in movies like “Fire in the Stone”, “Pitch Black”, Val Kilmer’s “Red Planet” and even an episode of Amazing Race.