Insight: The Dish to Try in Alsace, France

Insight: The Dish to Try in Alsace, France

The Alsace region of France is known for its picturesque villages full of half-timbered houses, long history of changing borders with Germany, and unique cuisine.

A visit here wouldn’t be complete without trying a hearty choucroute garnie or coq au vin made with the famous local Riesling. Then, there’s the tarte flambée.

Also called flammekueche, it’s a rather unassuming and simple dish. In fact, it looks a bit like a flatbread pizza. But it has a savory, crispy, and distinctive taste. When I took my first bite of tarte flambée at Les Brasseurs in Strasbourg, I knew I had tried something special. Pair it with a cold beer, brewed on the premises, and it’s absolute perfection. (If you have room for dessert, try the delicious tarte with nutella and bananas too.)

Legend has it that Alsatian farmers invented this recipe years before it was ever served in a restaurant. First, bread dough is rolled out to form a very thin base, which is then smothered in crème fraîche. It’s topped with onions and bacon, sliced into matchstick-sized pieces, then popped into a wood-fire oven until it’s browned, bubbly, and bursting with flavor.

The combination of fresh, local ingredients and a perfected recipe over time gives this meal a truly unique taste. I’ve tried making it and buying it—Trader Joe’s sells a frozen Tarte d’Alsace—but it’s something that simply can’t be re-created outside of the region.

Try tarte flambée at at any local eatery in Alsace. Turn the corner in a city like Strasbourg or Colmar, and you’ll likely see a restaurant offering it.

Courtney Taddonio has been a lover of travel ever since studying in Strasbourg, France during college. A Syracuse University graduate, she is currently working as a copywriter in Boston, MA. She balances out work with play by dancing with a local group and enjoying new restaurants, and she is always planning her next trip. Find her on Twitter @ctaddonio. 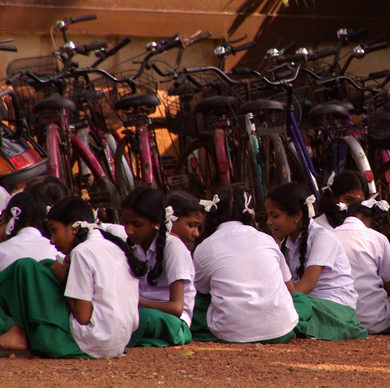