Does This Public Expression of Love Prove that Paris is the Most Romantic City in the World? 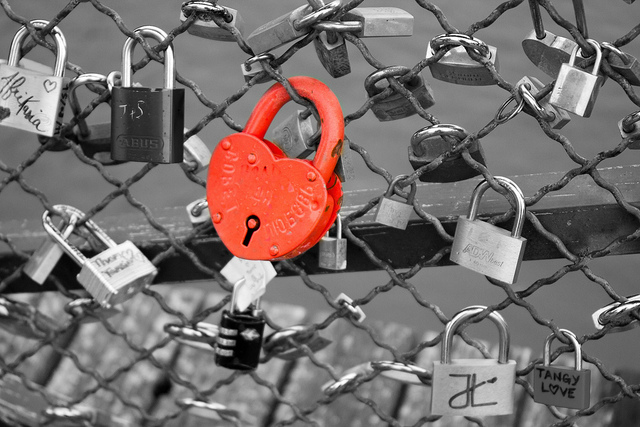 Walking around Paris, it’s easy to understand why so many romantic films are staged in this enchanting city. Overhearing French shop owners speak elegantly in their native tongue; inhaling freshly-baked pastries and baguettes; and gazing at the glittering Eiffel Tower at night, one can’t help but feel the city was made for wistful couples and love affairs. A city characterized by its age-old art, historic buildings and a memorable revolution, Paris is a quintessential love story dreamed of by many a hopeless romantic. But is it just a dream?

The Pont des Arts, a pedestrian bridge that runs along the Seine, is modern evidence of the real Parisian power of love. It has become a trend to clip bike locks and padlocks onto the bridge as a symbol of everlasting love; lovers write their initials on the lock as an expression of their inseverable commitment to one another and then they throw the key into the Seine River, to show their undying love.

A phenomenon that was originally regarded as vandalism, the love locks have pervaded City Hall, which finally allowed the exhibition to legally be a part of the bridge last year. The decision to allow the locks could be a result of the increased amount of press coverage Paris has received or the fact that the bridge has become a new attraction for tourists who often partake in the tradition.

Not everyone thinks the locks are so lovely. Locals have complained that the locks and keys lead to pollution and encourage more vandalism throughout the city, an issue they pay taxes to mitigate. Others see art in the expression of love. A student at a local art school once clipped more than 330 pounds of locks for a project, which he later featured in an art show called “Tainted Love”.

Recently, the city is doing some lock clipping itself. Officials are concerned that the vast amount of metal locks are weighing down the bridge and may cause damage to its historic construction. With more than 300 pounds on a single grate, the stability of the bridge is in question.

Even with the many obstacles this public expression of love faces, it doesn’t look as though the locking will stop anytime soon. In fact, the movement has spread to bridges in Moscow, Brooklyn, Seoul, Budapest, Rome, Tokyo and the Pont de l’Archevêché, another bridge in Paris.

The origin of the love locks is not explicitly known, but it is rumored to have been started five years ago, after the publication of the Italian teen novel I Want You. In the book, a couple shows their love by securing a padlock onto a bridge and throwing away the key.