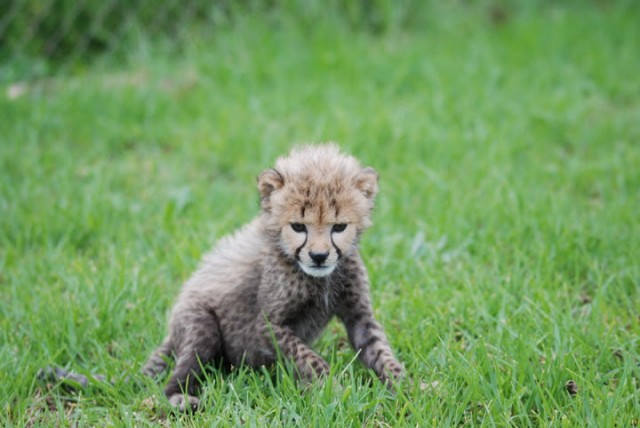 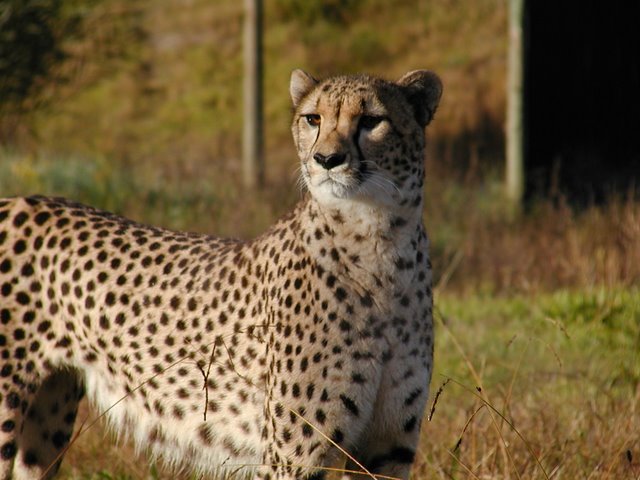 Waiting pensively, my heart rate began to quicken as I stared at the gate in front of me. A bead of sweat formed on my brow, quickly turning into a stream of droplets as it ran the length of my cheek. There was nothing to be nervous about, I was assured, but the fact that there was a large carnivorous animal lying in wait did not dispel any anxiety. Trepidation marked my careful steps. As the gate slowly swung open, giving an ominous creak to mark the peril, fear grasped my chest with sudden force.

The guide urged me cautiously forward, with a reminder to be mindful of pace and direction. In short order I was mere feet from my destination. With encouragement, I slowly knelt with an outstretched hand. An anxious exhilaration sprang up from inside. I was petting a cheetah. 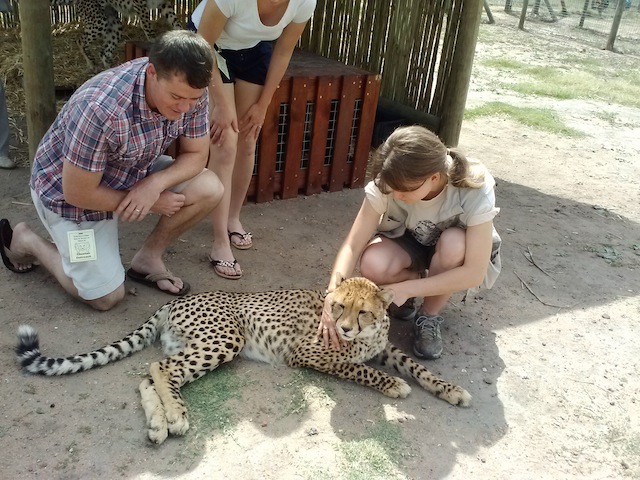 On a bright, sunny afternoon in Somerset West in the Western Cape of South Africa (30 miles east of Cape Town) a nine-month old orphaned cheetah was lying on the ground next to her handler, enjoying a leisurely petting from a visitor from halfway around the world. The scene was, in a word, surreal. Stroking the spotted fur, I was in disbelief. With one swipe, this beautiful creature could rip flesh from bone, a justified reaction for threat of danger. And despite reassurances from the staff or normalcy of tourists wandering the grounds, my flight mechanism was highly engaged, every shred of common sense begging me to flee.

This was an animal that feasted on antelope for sustenance. This was a creature that developed razor-sharp fangs over millennia to survive in the wild. But then came the realization that if this big cat wanted to cause me harm, it would do so with conviction of instincts. There was little chance of escaping now. And if I did run, I would somehow have to run faster than the cheetah- only 75mph.

As I continued to stroke the graceful carnivore I softly whispered “Good kitty” and prayed this one didn’t wake up on the wrong side of the den.

Despite the natural fear a mentally stable person should have when walking into a cage with a cheetah, the staff’s reassurances were well founded. The residents at Cheetah Outreach were all rescued as orphans, a reoccurrence that happens far too often across Southern Africa, and had grown up with daily interaction with humans. And although these graceful creatures were still quite a ways from domestication, they had learned to coexist in harmony with their two-legged caretakers.

The harmony is not a recent phenomenon, evidenced by the Egyptians’ fondness for the spotted cat. The ancient society held the cheetah in reverence, accompanying pharaohs and adorning art works. Yet recent history has not been as kind to the cheetah. 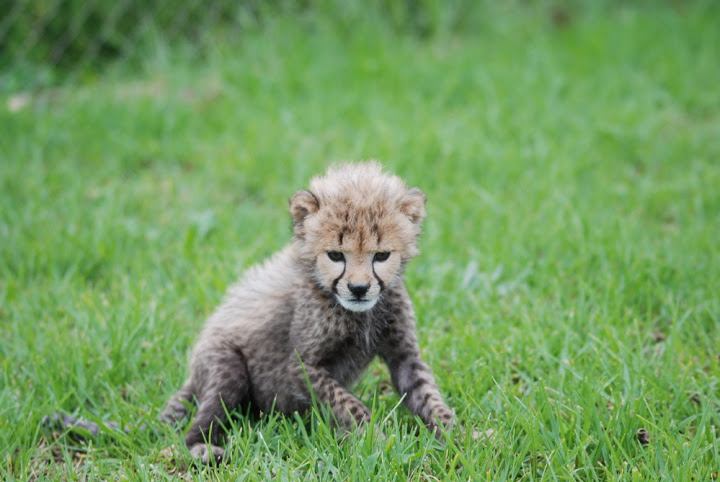 At the turn of the 20th century there were approximately 100,000 free-roaming cheetahs in the wild. That number has dwindled to 7,500 today, 1,000 of which live in Southern Africa. The problem is indicative of the expansion of human populations. Once undisturbed wildlife habitats have turned into farms, housing livestock ripe for picking by carnivores that historically ruled these plains. The rural farmer, in protective response to dwindling numbers of food and income, traps and kills the threat, unaware of the ecological consequences. To vilify the farmer would be shortsighted. After all, the reality of his existence is no walk in the park. And when an outside threat to his livelihood presents itself, it’s hard to fault him for taking swift action. Yet, compassion only goes so far. To understand the farmer’s plight is reasonable, to sit idly by is indefensible. Cheetah Outreach is working to remedy the situation.

The organization, established in 1997 by Anne Beckhelling, is not simply a refuge for orphaned cheetahs. In the 16 years of its existence, Cheetah Outreach has focused on community-based programs to raise awareness of the problem and educate the public about solutions. This includes raising orphaned cubs to be ambassadors for the species and giving visitors and residents an opportunity to come face-to-face with the elegant cats. Being mere feet away from a cheetah certainly gives you a healthy respect for the animal. But Cheetah Outreach goes beyond raising awareness for their plight. It addresses the problem of poaching by introducing farmers to alternate methods of protecting livestock.

The most effective to date has been the introduction of Turkish Anatolian Shepard dogs. Bred in the Anatolian Plateau in Turkey, which shares a similar climate to much of Southern Africa, these impressive pooches are an effective deterrent. Standing at waist height and weighing in around 165 pounds, the Shepards are also remarkable athletes, reaching speeds just shy of the blazing cheetah. That combination of size, strength, and speed (as well as the typical canine senses of smell and hearing) is a formidable opposition to a cheetah, who would rather flee than engage in close combat. In addition, the Anatolians also gain a deep sense of pride for protecting livestock, often raised amongst the herd from 6-8 weeks old.

Cheetah Outreach breeds these extraordinary dogs and partners with select farmers to introduce them onto farms. Since the launch of the Anatolian program in 2005, livestock losses on participating farms have decreased 95-100%. Give those dogs a bone. 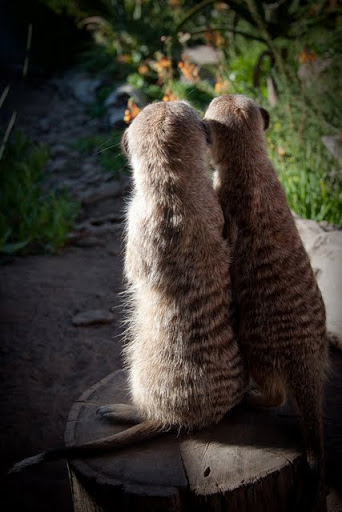 In addition to the cheetahs and Shepards, Cheetah Outreach is also home to a few different animals, also orphaned or abandoned. Among the residents are a Caracal, Black-Backed Jackals, Bat-Eared Foxes, and two inquisitive Meercats. The entrance fee to view and learn about the animals is just over $1 during the week and $.60 on the weekend, further reinforcing the organization’s efforts to welcome as many visitors as possible. Even the cheetah encounters (the nerve-wracking experience described above) are surprisingly affordable with adult encounters costing a bit more than $12 and cub encounters with cheetahs 18 months or younger costing double that price. Well worth the price, even if your stomach turns to knots.

Read More of Our Stories in GOOD

To learn more about the commendable efforts of Cheetah Outreach visit the website here: http://www.cheetah.co.za/ 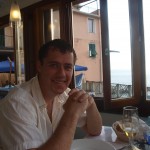 About the Writer
Michael Cavanagh is a freelance writer in search of memorable locales, delectable cuisine, and delicious drink. An experienced world traveler, Michael views globetrotting as an adventure like no other. He hopes to share his discoveries with other oenophiles, foodies, nomads, and travel enthusiasts. Michael has been published in The Wine Enthusiast, PalatePress, Destinations Travel Magazine, Terroirist, and has a regular column at Examiner.