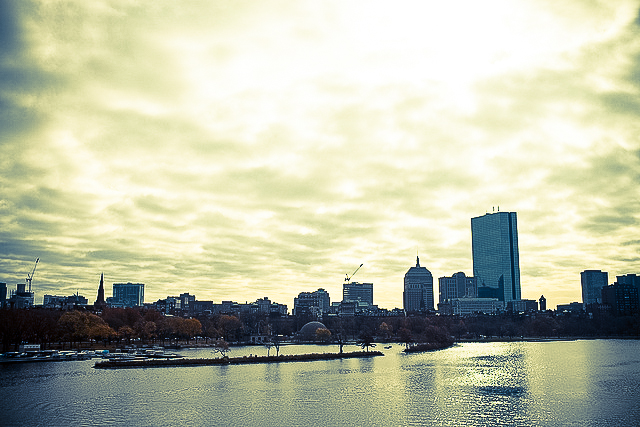 We had reached what we dismissed as a stretch of subdued spectators less than a mile from the finish line.

Four friends and I had been running alongside my roommate Jen –who was a first-time marathoner –somewhere between miles 20 and 21, shouting, “Cheer for Jen! Our friend Jen is coming up — would you yell for her?” to the thousands of people lined on either side of the street.

We received mixed reactions. Drunken BC students hollered and chanted, extending their arms for yards and yards of high fives. Some spectators were puzzled, trying to read our Sharpie-printed shirts and yelling encouraging catchphrases. Others didn’t respond at all, taking in the race and looking amused at our energy and cheerleading efforts.

So when we crossed this stretch of onlookers who seemed less than enthusiastic it was a bit perplexing, but neither unsettling nor alarming. We continued to run on toward the finish, quieting our spirited calls a bit.

Then, for the first time, I heard someone — one of the spectators? a runner? a police officer? — say something that stopped runners bound triumphantly for the finish dead in their tracks.

“There was an explosion. Two bombs went off at the finish line.”

If the purpose of random acts of violence is to terrorize then, yes, in the short-term, these horrific acts do instill an immediate, gripping sense of fear. They work in the short-term because no one is certain of what happened. Details are scarce and scattered and people begin to wonder if there is more to come.

No one knows where to go or what to do — especially in a city and setting where such violence suddenly and shockingly destroys the notion that security is a given.”

My mind raced to the mobile tracking services we had been using all day to follow our friends’ progress. If the tracking was accurate, at least two of our friends and the groups that had been running alongside them during the difficult last stretch should have been at the finish line when the bombs went off”…

In the midst of chaos, my awareness turned to a woman across the road. She was easy to see, clad in a hot pink jacket, running top, and visor — and visibly breaking down to the point where she was having trouble standing upright.

She had been falsely told that two bombs went off on a Boston-bound train. Her husband and child had been on a train running from Wellesley into the city to meet her at the finish line.

A few of our friends were comforting her, and she joined a small group that had started to form between us, Jen, and other Tufts runners and their supporters. Many of us were doing our best to keep the runners warm, and to formulate some kind of course of action to help.

Outside our moving huddle, strands of yellow “Caution” tape flanked the sidewalk and soon obstructed our path. We ducked under it and stumbled upon a medical tent, where our marathoners joined a line to receive space blankets. I was standing by myself, surveying our surroundings, when a friend approached me and said, “We need to keep moving. They might want us to get confused and for things to come to a standstill, you know?”

Random acts of violence terrorize in the short-term.

At that moment, my brain — which had not been processing the enormity of the situation — shut down. Tears sprung into my eyes, followed quickly by the awareness that no matter what else occurred, this was not a productive response. Without thinking concrete thoughts, I became hyperaware that we were standing a few feet from a bridge.

Jen, who split off from us after finding the marathon team and coaches, spent two hours wondering if her family, who had been waiting for her at the finish line, was alive. Phone service was shut off, lest a cell phone detonate another bomb. A sobering realization that technology simultaneously connects us and holds the capability of harming us in unimaginable ways.

Jen’s experience that day ended as well as possible, as did that of the distraught women in pink, and everyone we knew at the marathon. We are all immensely fortunate.

Seeing the very graphic photo coverage and reading about the three victims is heartbreaking in the most literal sense. I ache watching and reading the news and am particularly horrified by the death of eight-year-old Martin Richard from Dorchester, who was killed at the last point of the race, which was ironically dedicated to the victims of Newtown, after congratulating his father on finishing the marathon.

#LiveOutLoud on Instagram: This Turkish Restauranteur Spends His Days Traveling the Turquoise Seas

Random acts of violence terrorize in the short-term.

At the marathon, we were frightened, confused, panicked, and disoriented. Today, we feel numb, empty, sad, hurt, and violated.

Random acts of violence terrorize in the short term.

But I am hopeful that this one, at least, will not serve its purpose in the long-term.

The vast majority of us are lucky, and I think we are all very conscious of that right now. But far from destroying our spirits, this horrific occurrence is bringing us together and making us stronger and closer than before. The emotional turmoil we feel when we are not sure whether loved ones are safe reminds us how fortunate we are to live another day in their presence.

Jen beautifully summed up the hope that will undoubtedly rise from this tragedy in a post on Facebook: “If I come away with anything, it’s that this race could not be less about the finishing times and medals and more about the community that the marathon brings together, and I’m certain that in the wake of this terrible tragedy, we will all come together and show whoever is responsible for these unspeakable acts that the city of Boston cannot be broken by terror attacks.”

The articles and stories people have been tweeting, posting, and sending are not focused on the perpetrator of the act, but, instead, have highlighted the day’s victims and heroes. Social media and opinion-editorial sections alike have come alive with calls for resilience and proclamations of love.

I cannot possibly claim to know what the legacy of Monday will be. But I am cautiously hopeful that it will involve a city’s pride strengthened, and people across that city — as well as this country and the world — valuing ever more deeply the love in their lives.