9 Characteristics of a Culture that Determine Happiness, Longevity and Quality of Life My first introduction to the concept of the world’s happiest countries was through reading the book Geography of Bliss by Eric Weiner. Prior to reading it, I hadn’t given the concept much thought. As part of his research he visited ten of the happiest places on Earth such as: India, Bhutan, Thailand, Switzerland, The Netherlands, Qatar, and Iceland to name a few.

According to the latest CNN report, Costa Rica has been crowned the happiest country in the world. I’ve had the pleasure of experiencing the Costa Rican Pura Vida (pure life) firsthand. Here, hospitality, generosity, and kindness are the staples of the culture. Everyone has a genuine desire for engagement and interaction. This makes being in Costa Rica a pleasure and serves as a reminder of what is possible in our own country and community.

In addition, a particular part of Costa Rica, the Nicoya Peninsula, is considered a Blue Zone, as outlined in the books and research of Dan Buettner, the author of the 5 Blue Zones. These special zones are identified as having the longest living populations who enjoy the greatest quality of life. They are: Sardinia in Italy, Okinawa in Japan, Loma Linda in California, Ikaria in Greece, and Nicoya in Costa Rica.

According to Buttner’s research there are nine common characteristics of the Blue Zones that are called the “Power 9®”. These shared qualities of all the Blue Zones are:

1. Natural Movement –“¨The world’s longest living people don’t pump iron, run marathons or join gyms. Instead, they live in environments that constantly nudge them into moving without thinking about it.

2. Purpose – A multitude of studies have reported that knowing your sense of purpose is worth up to seven years of extra life expectancy. Furthermore, Patricia Boyle, a researcher at the Rush University Medical Center and part of “Rush Memory and Aging Project”, has identified that having a life purpose greatly reduces the risk of Alzheimer’s and other cognitive degenerative diseases.

3. Down Shift – Even people in the Blue Zones experience stress. What the world’s longest living people share are the routines that help reduce and cope with stress.

4. 80% Rule – “Hara hachi bu” is a 2500 year old Confucian mantra originated in Okinawa and said before meals that reminds people to stop eating when their stomachs are 80 percent full. The 20% gap between not being hungry and feeling full could be the difference between losing or gaining weight.

5. Plant Slant – Beans, including fava, black, soy and lentils, are the cornerstone of most centenarian diets. Meat, mostly pork, is eaten on average only five times per month.

6. Wine @ 5 – People in all Blue Zones (except Adventists) drink alcohol moderately and regularly. Moderate drinkers are said to outlive non-drinkers.

7. Belong – All but five of the 263 centenarians that were interviewed belonged to some faith-based community. Denomination didn’t seem to matter. Research shows that attending faith-based services four times per month adds an average of 4-14 years to one’s life expectancy.

8. Loved Ones First – Successful centenarians in the Blue Zones put their families first. This means keeping aging parents and grandparents nearby or in the home. They were also committed to a life partner, which can add up to 3 years to one’s life expectancy.

9. Right Tribe – The world’s longest living people chose or were born into social circles that supported healthy behaviors. Research from the Framingham Studies shows that smoking, obesity, happiness, and even loneliness are contagious. Thus, the people with highest life expectancy had health behaviors that were favorably shaped by their social networks.

In Costa Rica, there are daily examples of these qualities,  for instance:

Could you replicate Pura Vida in your own home and community? Here are 5 things to try:

Just think, what if you initiated a happiness movement in your community? What if the only competition to win was becoming the happiest home, town, state and country? Life would truly hold a deeper meaning, one that would lead to a simpler more mindful existence. 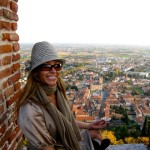 Enthusiasm to love your life is contagious around Silvia.  Her expert passion connects people to their own joyful potential.  Silvia lives her happiness in such a big way that you can’t help but leave her classes, workshops, trainings and retreats spiritually uplifted!  Born in Ecuador, raised traveling around the globe, she is an enthusiastic citizen of the world and spiritual adventurer. She has over 10,000 hours and 15 years of teaching experience, owned a yoga studio for 9 years and after being run over by a car used yoga to recover physically and emotionally. Silvia leads Alchemy Tours Yoga Retreats and Alchemy of Yoga RYT200 Yoga Teacher Training. Join her on Twitter to keep inspiring greater happiness by answering the question #YRUHappy. Connect with Silvia on Twitter and Facebook and learn more about her story at www.alchemytours.com or www.silviamordini.com.