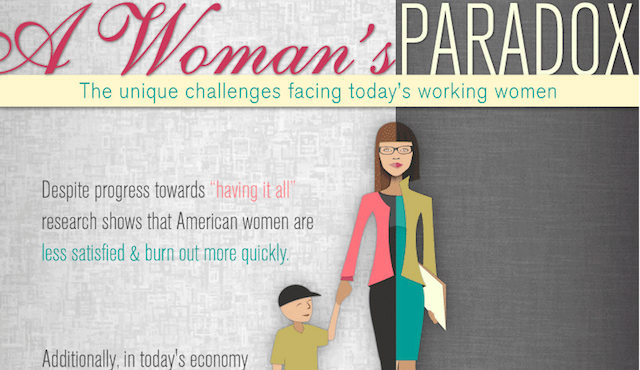 I do think women can have it all, just not at the same time. – Madeliene Albright, former U.S. Secretary of State

More than ever women are taking on the roles of mommy and provider in what feels like an unsteady juggling act. They are still earning less than men (for every $1.00 a man makes, the female equivalent makes $0.77), but are the breadwinners in 53 percent of households where both partners work.

Women are also putting in longer hours and earning higher degrees and salaries than their predecessors, yet they are much less satisfied and happy as compared to working women in the 1970s.

The infographic below was sent by Julie Ander, one of our readers who is a women’s activism enthusiast. Julie stumbled on the infographic and found it to be an “excellent visual analysis of how modern women try to adapt to nowadays’ working and motherhood life and how they stand compared to men.”

We’re grateful to Julie for sharing this insightful look at how women are trying to have it all despite the price that comes with it.