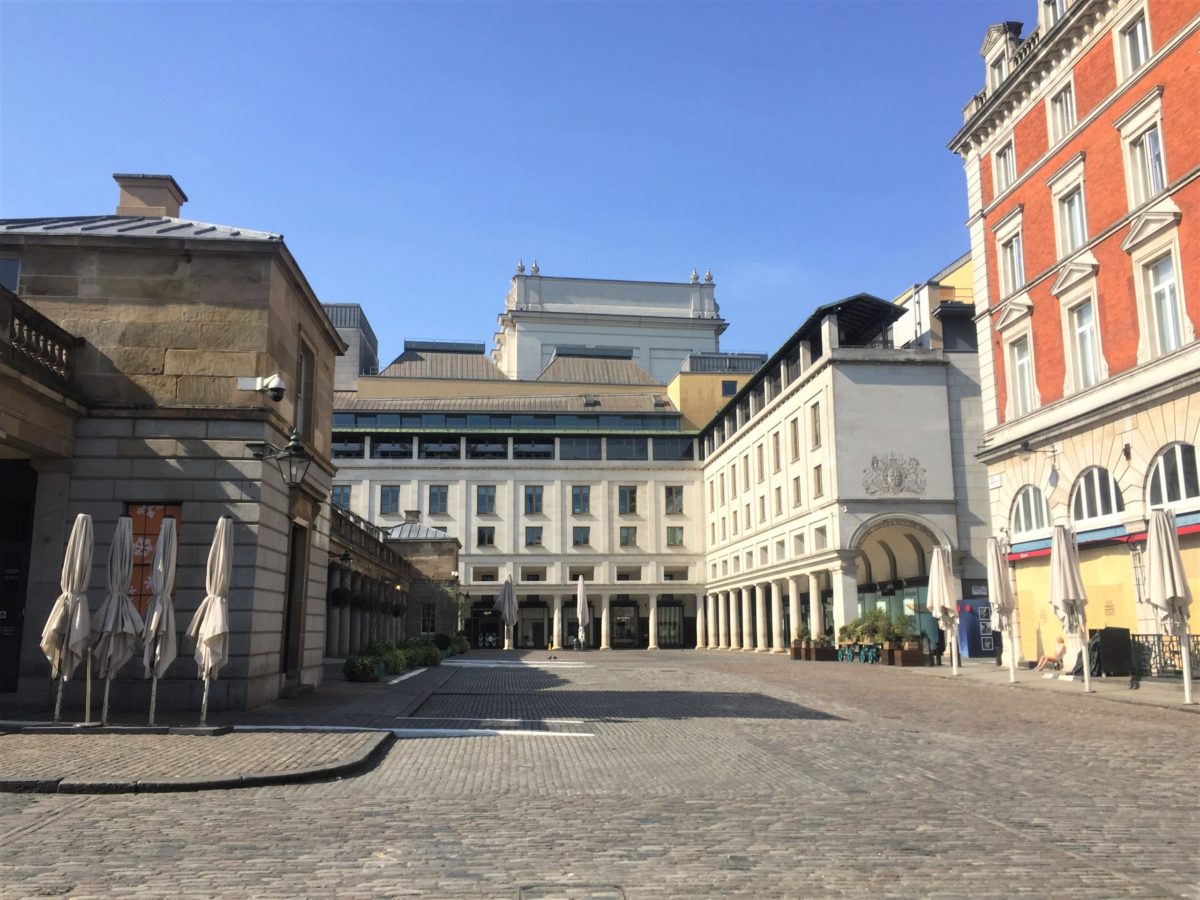 Living in London When City Life is Paused

A Victorian covered market, bright and airy from the sunlight trickling through the glass ceiling, sits in the middle of London’s Covent Garden. The market is surrounded by a large, open, cobbled square, bordered by small streets leading to the rest of the city centre. Covent Garden has long been a part of London’s history, from surviving the Great Plague of 1666 to a centuries long past as a fruit and vegetable market (finally ceasing trade in the 1970s). The area is now a popular tourist spot, home to the Royal Opera House, the London Transport Museum and an array of street performers.

I recently passed through Covent Garden during my daily exercise. All the normal markers of central London on a sunny bank holiday afternoon – tourists shopping, happy crowds enjoying an afternoon drink, the thriving hum of street cafes – were gone. Everything was quiet as I cycled the other empty streets of the West End, ordinarily London’s vibrating, pulsating centre. This is a pattern played out across London, where many of the advantages of large city life are currently paused. No museum exhibitions, no post work drinks with friends, no restaurants and no group picnics in the city’s beautiful parks.

The city experience clearly differs from person to person. London is a city of inequalities, a city where nearly a third of its population lives in poverty, as well as a city of flat whites, restaurant pop ups and Tate Modern exhibitions. Compared to other urban areas, London’s lockdown has been relatively relaxed. Restrictions were marginally loosened across England last week, though even at their strictest employees could still travel to work if their job could not be done at home, citizens were allowed outside for a daily exercise and mask wearing was neither officially advised nor enforced.

But life has still changed, perhaps permanently, for Londoners. Residents quietly wait in lines outside local supermarkets, expensive speciality delis and cornershops. This seems a fittingly efficient and orderly response to a national crisis by a nation and city famed for our queuing. Dozens of stations on the London Underground, ordinarily an essential transport network connecting millions of Londoners, remain closed and we are encouraged to avoid all non-essential journeys. However, some small and sometimes weird pockets of life still continue as before. Beefeaters in their full uniform can be seen patrolling the Tower of London. An increasing number of Londoners are sitting down in parks and public spaces to share some cold beers and a packet of crisps, and couples and joggers meander along the banks of the city’s rivers and canals.

Whilst there may be small droplets of continuity, the reasons many of us choose to live in large cities – for work, to be near loved ones and for easy access to ‘culture’ (restaurants, museums, nightlife, architecture etc) – have flattened. We are ordered to work from home if we can, theatres and galleries are closed and we now exist in long distance relationships with loved ones who may only live half a mile away.

Like millions of others, I spend 23 hours a day within the same four small walls and my face to face interaction with anyone other than who I live with has been extremely limited. I could be living anywhere in the world with a decent internet connection and my current life would barely change. This includes places where there is enough living space to not always be in earshot of your partner and where there is plentiful green space. What remains of a city when many aspects of its cityness are stripped back?

In the quiet and stillness, some of the more unlivable elements of modern city life are gently fading away. During a period of sickness and self-isolation I was overwhelmed by the support offered by my neighbours, whom I had never previously met. Every Thursday evening the sound of thousands rushing to their windows, doorsteps and balconies to clap and cheer for our carers eclipses all other activities. I can hear bird song for the first time since moving here. The air feels clearer. The roads are quieter and cycling is more pleasant. The River Thames is almost tranquil, clearer, less disturbed by river traffic and has a faint but distinct whiff of the sea.

These slim positives do not make more than the tiniest chip in our collective worries or loss. But they do show how cities, and the millions of people who live in them, can adapt and change. Whilst ‘This’ may go on for a long time, and life after will certainly be altered, there will surely be a time in the future when we can again go to pubs with friends, dance shoulder to shoulder, and plunge into the constant rush hour of the Central Line. London will come back changed – hopefully even more liveable – but with the same sense of humour, determination and wariness towards people who talk loudly on the Tube.

Joanna Sarah lives in London and writes about travel, food and culture. Her work can be found at whatjoannawrote.wordpress.com.