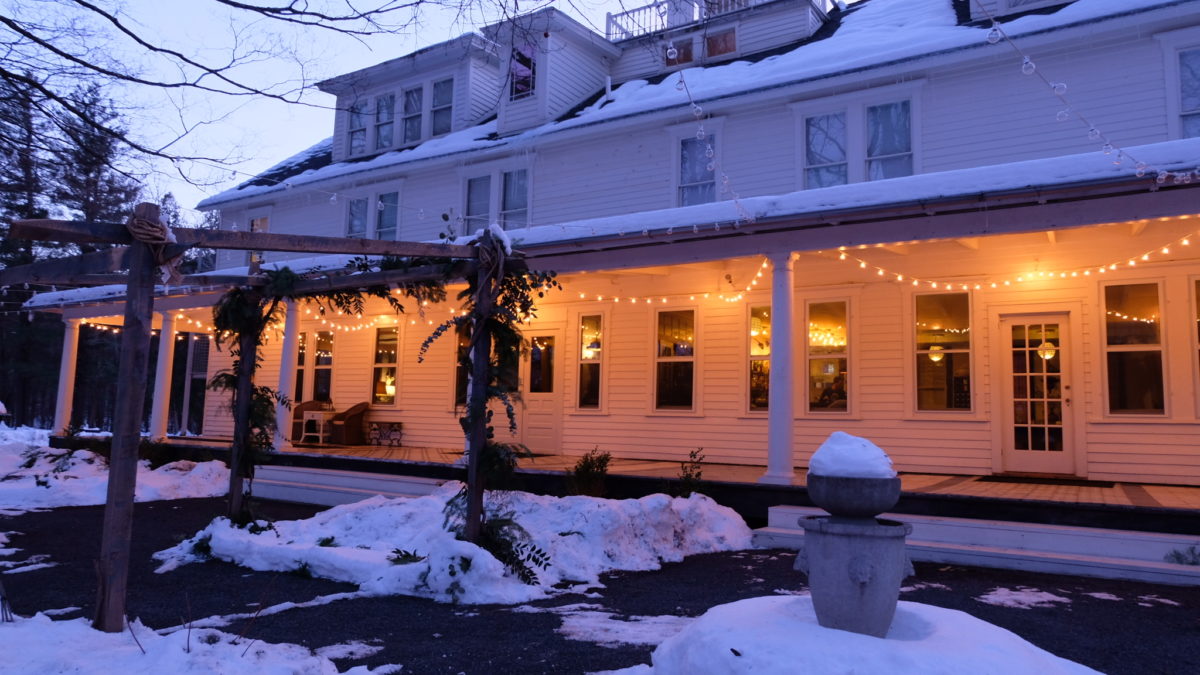 Worth Traveling For: Foxfire Mountain House

At three in the afternoon hot water had been freshly boiled and I pour myself a cup of tea and retreat to the living room to sit in front of the fire that’s been burning since the morning. It’s early December and there’salready snow on the ground, tricking those of us who’ve fled the city for a weekend in the woods into thinking we still have real seasons. Chet Baker and Billie Holiday play on repeat on a record player in the corner. Billie croons out, asking us to “never, never change.” For now, I’m content to oblige.

The entire early winter weekend I spent at the dreamy, bohemian, makes-you-never-want-to-leave Foxfire Mountain House in upstate New York, I never bothered to put on shoes. Instead I climbed down the Moroccan tiled stairs from my third-floor room to the wide-open ground floor in a pair of yellow leather slippers I picked up last summer in Tangier. I did so not so much as to match the décor (which I did) but because I felt like I was at home, or like I was visiting the home of a worldly, wealthy uncle. As far as I know, I don’t have such an uncle, but was down to pretend.

Foxfire Mountain House’s husband and wife owners, Tim Trojian and Eliza Clark, purchased the century old, and then completely derelict inn, after growing inexorably tired of the pace of New York City. They came to the property initially to view what was advertised as a small cottage that also happened to have a larger structure on the grounds that was deemed a tear-down. The tear-down ended up being the hook, and they set about renovating what once operated as a fashionable hotel known as the Mountain Breeze House. Moving into the cottage, they spent the next few years meticulously renovating the former hotel room by room, utilizing their backgrounds and city careers in the worlds of food and design to create an eclectic retreat that puts this corner of the Catskills’ Shandaken Valley on the map.

This fall, after several successful years as innkeepers, Eliza and Tim published Foxfire Living: Design, Recipes, and Stories from the Magical Inn in the Catskills. It’s as much a manifesto on slow living as it is a peak into the creative power that created an inn certainly worth traveling for.

The three-story inn packs in eleven rooms, six of which are largely sized and have ensuite bathrooms. The top floor, where my boyfriend and I found ourselves, is cozier and compact with six modestly sized rooms, communal sitting nooks, and several bathrooms. On the weekend of our visit we had the third floor entirely to ourselves and I took full advantage of the enormous soaking tub which is somewhat miraculously fitted in a tight corner under the roof’s slanted eaves.

The rooms are simple and stylish with an appealing mix of African, Middle Eastern, and early American elements—think wooden floors painted white, leather poufs, and West African textiles. The aesthetic, at once trendy and timeless, is enough to make you want to settle in for a weekend of not doing much of anything.

The separate cottage, now aptly named Foxfire Cottage, is available to rent and has three full bedrooms, a working kitchen, and of course, a fireplace.

It’s for good reason that the Inn’s restaurant, Foxfire Bar Room, is popular with a crowd that extends beyond the overnight guests. The cozy, communal dining room, seasonal menu, and creative cocktail list make this one of the best spots in this part of the Catskills for dinner or just to hang out with a cocktail or two.

The dinner menu is meat heavy and hearty. As a vegetarian I opted for the lentil and walnut loaf which is decidedly a meat-lover’s interpretation of dinner. The drinks, while excellent, come with city prices. Try the bourbon-based Old Mt. Tremper, which is not only delicious, but a portion of the proceeds from the sale of the drink (a hefty $18) is donated to the Catskill Center, which works to preserve local woodlands. Also worth noting when considering the prices: the Bar Room is a non-tipping restaurant as Foxfire pays its employees full living wages.

Breakfast, which is included for guests, features an array of berries impervious to winter, homemade scones and a vegetable quiche, potatoes, with pickled tomatoes, and array of hard cheeses. Coffee, served with a variety of milks, including goat, remind guests Brooklyn is only so far away.

The centerpiece of the inn is the living room with an enormous stone fireplace Eliza and Tim uncovered under layers of drywall during their meticulous restoration. The fire gets lit in the morning and is fueled throughout the day and is truly the heart of the inn. Large leather couches, a record player, a small curated selection of books from Rough Draft, the bookstore in nearby Kingston, and the perpetually boiling teapot and to-order bar make the communal room a place to hang out, read, chat with the other guests, or browse novels and guide books.

For the brave at heart, a small bonfire is lit each night off the front porch. A glass house near the backyard pond makes cozy nooks for venturing out despite the winter temps.

The Inn generally books out each weekend in the summer and early fall for private weddings but is open for individual guest stays throughout the week. A bonus of staying in the summer is the use of Foxfire’s pool which during my stay was covered under a thick blanket of snow.

The Phoenicia Diner, well worth its hype from both locals and weekenders, is just down the road and a mandatory stop for any weekend in the Catskills. Antique shops, from the curated Scandinavian Grace which sells a mix of northern European food items and vintage pieces, to Birch Creek Mercantile, modern take on the classic general store with a cocktail bar thrown in, can be found along Route 28.

It’s best to have a car in the Catskills, and Foxfire Mountain House, located in Mount Tremper, can be reached within two hours from New York City. As an alternative, try Catskills Carriage, a bus company that runs quite regularly from Brooklyn, Midtown Manhattan, and the western Catskills.

Madeline Weinfield is a writer based in New York City. She is a contributing editor to The Culture-ist and oversees community contributions. Read more of her writing at madelineweinfield.com.