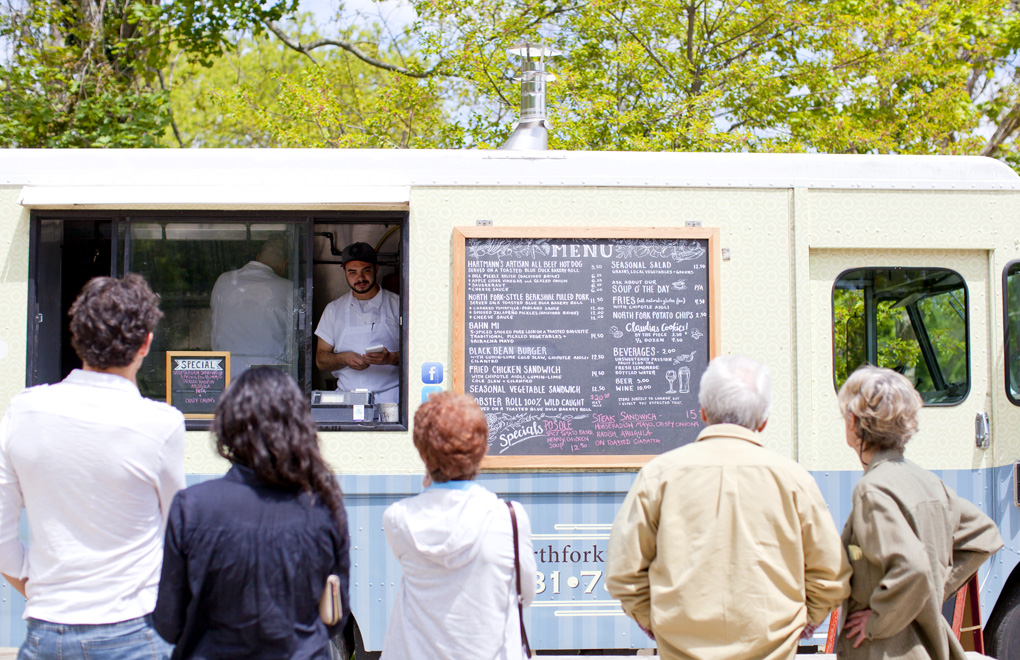 It’s rare to find yourself, mid-afternoon, already dreaming of tomorrow’s breakfast. But it’s also rare to wake to a morning meal lovingly created by a James Beard Award winning pastry chef. But such is the a.m. routine at the North Fork Table & Inn, a hideaway on the eastern edge of Long Island’s North Fork. The sleepier, rugged sibling of the party-ready Hamptons, the North Fork has put itself on the map—largely thanks to the North Fork Table & Inn—as a food and wine destination worth traveling for. Here there is no see-and-be-seen madding crowd, traffic, and inflated ice cream prices. This is a land of farms, vineyards, and Sound-facing beaches, dotted with old homes (some as early at the 17thcentury), tiny burying grounds, and once-upon-a-time fishermen taverns. The North Fork is not so much an antidote to the Hamptons, but a different world, and the North Fork Table & Inn is the place to take it all in.

The Inn, which is an easy walk from the Southold train station, has just four rooms. They’re simple, with a hint of New England puritan sparsity, but have comfortable beds and antique linens. Off the Inn’s large porch is a small area of garden seating that functions as the guests’ living room. But truly it’s the restaurant you’re here for and luckily you can have a taste of its genius even if you don’t stay for lunch or dinner. Breakfast (included) comes courtesy of Claudia Fleming, the maestro kitchen and former pastry chef of Gramercy Tavern. Each morning Claudia conjures savory and sweet scones from the kitchen, daily changing quiches and tarts—which luckily for me meant variations with early season asparagus—thick cuts of bacon, and homemade granola. The whole meal is so beautifuly spread out you feel you’re still dreaming when you emerge from your room upstairs.

One taste of breakfast will convince you to stay for a day’s worth of meals. Dinner here is the main, superb event, and as a guest of the inn you’re privy to the clandestine world of the army of chefs who spend the whole of each day preparing for the moment the restaurant opens its door. Here is a rare combination, completely lacking in pretension, of fine dining and stay-until-closing at the bar. If you opt for a table, a swarm of blue-shirted, apron-clad waiters buzz about delivering meals of Peconic Bay seafood and North Fork meat (duck and beef). It’s daunting trying to navigate the menu, not because of its size (manageable) but because of everything’s appeal. The tasting menu (offered at $125 per person) and wine pairing (an additional $35 per person) attempt to make it easy and gives a thorough land and sea sampling. If you order off the menu you’ll find biodynamic, seasonally rotating dishes. For me that meant a market-fresh salad, hearty risotto fritters, and buttery sea scallops with English peas. Here it’s criminal to skip dessert and I went for the coconut tapioca pudding and take-away freshly baked cookies. The wine list highlights the North Fork’s wines, which are increasingly getting the attention they deserve, as well as vintages from further afield.

In an effort to bridge the gap between the restaurant’s white tablecloths and the rest of the world, a food truck emerges each day from 11:30-3:30 in the Inn’s backyard. From its small window come summer classics like all beef hotdogs but also black bean burgers, broccoli salads, and fries served with the same side of aioli offered in the dinning room. The crown jewel of the truck’s menu is the fresh-as-they-come lobster rolls served on bread from the down the street Blue Duck Bakery. Wash it down with a Montauk beer—the only thing not from the North Fork.

How About a Nightcap?

Even if you chose to eat at the bar, you should come back for a cocktail. There’s a healthy range of whiskeys and amari, and an impeccable cocktail list. Most appealing on the list: The Baum, a mix of strega, citrus juices and seltzer, and the Lew Brown, a mix of bourbon, herring cherry liqueur and fernet branca.

North Fork Table & Inn is centrally located on the Long Island Wine Trail. Within a mile or two are some of the North Fork’s most charming and rustic vineyards—The Old Field and One Woman, both serving surprisingly beautiful wines in farm and sea settings with a scattering of chickens running around. Founder’s Beach is less than a mile away and makes for a good sandy spot for swimming and sunbathing. Also nearby is Horton Point Lighthouse, a small structure from the 19thcentury. Stairs lead down to a secluded, rocky beach. Further afield—but still less than half an hour by bike—you’ll find some of the larger vineyards, among the best: Kontakosta, a sprawling property on the sea and near the bustling town of Greenport. Nearby too is Lavender By the Bay that will spring into its colorful life mid-June to mid-July. Keep biking and you’ll pass the sleepy postage-stamp village of Orient, the furthest point east.

Come by train from New York City ($45 r/t) and leave the car behind. Bikes get you far and quickly, and are the preferred method of zipping through the landscape. (Dan’s Bikes deliver.)

About the author: Madeline Weinfield is the community editor of The Culture-ist. Follow her adventures on Instagram @madolionw.