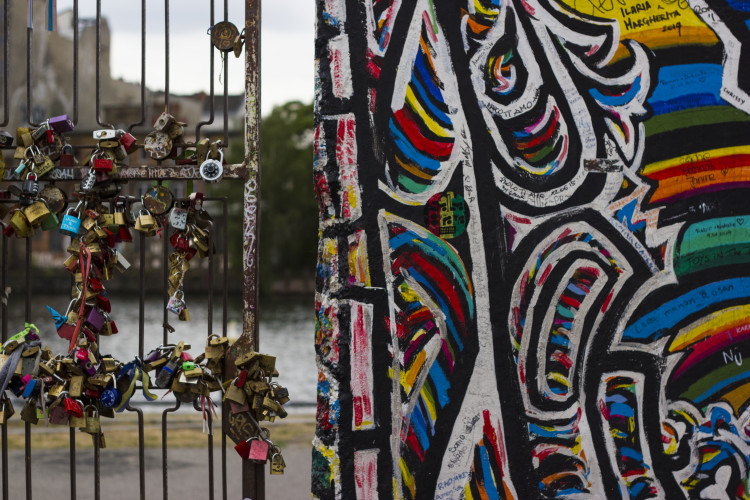 By Daniel B O’Donnell

Stretching for nearly a mile on the banks of the river Spree stands one of the largest and most culturally important art showcases in the world. Painted on the longest surviving stretch of the wall that once divided friends, families, communities and ideologies are now over a hundred different murals. Representations of what the wall and its coming down meant to the people of Berlin and across the globe.

Tourists take turns to stand in front of ‘My God, help me survive this deadly love’ – an iconic image of the two communist leaders, Erich Honecker of the Deutsche Demokratische Republik and the Soviet leader Leonid Brezhnev, at the height of rule embraced in a fraternal kiss.

Some visitors attach ich liebe dich padlocks to a former patrol gate, ala Pont des Arts in Paris, and all over are thousands of messages scribbled in graffiti.

There are abstract designs, messages from abroad, literal images downing the former communist regime and quotes about the strength of unity.
One message stood out, scribbled in black just next to a painting showing thousands of people breaking through the wall.

It is perhaps a more apt sentiment for the Berlin of 2015 than any of the other depictions on what is now known as the East Side Gallery. Despite its historical importance, a number of the original paintings commissioned in 1990 have been lost without warning. Some to provide access to the river for the new O2 Arena opposite, more to make way for luxury apartments and others simply to weather and time.

The fall of the wall in 1989 brought with it a wave of enthusiasm for tearing down representations of an oppressive, communist past. Statues of Vladimir Lenin – the founder of the Soviet Union – were ripped apart and torn down, communist blocs were vandalized and graffiti became the image of Berlin. A city liberated. Down with communism, in with freedom of expression. Berlin was to be a mecca of all things experiential.

For the quarter of a century since then, Berlin has rightly become known as one of the party capitals of the world. Once a rumor, now it’s well known that thousands queue for hours to try to enter the famed Berghain techno nightclub. Revelers spend as much as three hedonistic days and nights in an old power station where drugs, alcohol and fornication are almost the norm. That’s if they get in of course. The entry requirements are a mystery, as notorious door staff turn away as many as they let in – seemingly without any discernable logic. But the fact that the club has gained international notoriety is an irksome and paradoxical situation for many Berliners.

The club used to maintain an underground status that afforded a kind of exclusivity to locals. A hidden gem that liberated Berliners in ecstasy. Though the nature of the club and its antics within only intensified its mystique and appeal from further afield. Reviews started appearing in newspapers and magazines, smartphones meant pictures could be taken surreptitiously. Word got out, the queue now full of tourists.

What had made the club so special and so treasured by Berliners was being diluted but also made the club financially viable and the city better off. Today, twenty per cent of tourists visiting Berlin cite the nightlife as the main draw.

This question between cultural sensitivities and financial stability is also fundamental to one of the most currently divisive issues in Germany.

When the German government legalized prostitution in 2002 it was sold to the public that sex workers would be provided safer working conditions and better healthcare, whilst helping to erase the stigma from the profession. The reality is that as of 2015 only one per cent – around 400 – have registered as prostitutes in the country, despite a reported 1.3 million ‘transactions’ taking place every day. Germany’s economy now receives around €20 billion from the industry and Berlin, with its 500 brothels and counting, is now known as the ‘global sex capital’.

A 2012 paper by the journal World Development seems to have got the Bundestag, the German parliament, thinking. The report’s conclusion chimed with what many in the country already knew, the legalization of prostitution increases human trafficking. Being a prostitute in Germany is still one of the safest places in the world to do so, but the unregulated are still subjected to poor conditions, pay and working hours and according to some, that amounts to lack of freedom.

Underground is exactly what Berlin doesn’t want in the 21st century. Despite changes, this is Berlin’s reputation – a city where anything goes and everyone is open about it. The hippy lifestyle lives on here, a growing cycling culture dominates the city’s roads, there are still many artists and musicians, artisanal restaurants and cafes fill street corners and the rent is still famously cheap. The pulse running through this city seems relaxed and almost carefree.

But alongside some subtle changes in subculture are physical representations of a city going through an enormous transformation, as a generation that have known nothing but unification are making their mark.
Cranes cover the skyline. On every street are construction works, dug up roads, buildings being scrubbed of graffiti, dustsheets, road diversions and the constant sound of drilling. A revamped Berlin is being set in the die cast.

Though it is not all new, a more careful consideration is being taken to the past that was not afforded to the East Side Gallery a number of years ago. Former communist blocs are being renovated, the most famous statue of Lenin that once stood proudly in Leninplatz (now renamed United Nations square) is being dug-up and placed in an exhibition and most notably – and not without controversy – a full-scale replica of the monolithic Prussian Palace is being rebuilt where it once stood on the UNESCO Heritage site, Museumsinsel. It was destroyed by the East German government, the DDR, in the early 1950s but €600 million has since been allocated by the Bundestag to restore it to its former glory. When it opens in 2019, it’s rumored to feature a number of iconic exhibitions about Germany’s chequered past – including the much hidden and bloody period of German colonialism in the late 19th century.

Although the project has split opinion, it does point to Berlin’s ability to pay respects to its history that many others would try to forget and obscure.
Nowhere is this more apparent than in one of the most famous, touching and suitable tributes to the atrocities of the Second World War, the Holocaust Memorial. At first sight it doesn’t look like it would lend itself to quiet reflection being next to Ebertstraße, a busy main road just south of the Brandenburg gate, but the further you walk amongst the myriad of different sized steles that rise around you and the sound soon dissipates.

Housed underneath is a full exhibition. Hundreds, thousands, millions of accounts from those persecuted under Nazi-rule are displayed in all different ways. The stones that rose above ground continue underneath and dangle from the ceiling, poignantly. The experience is haunting, painstaking, heart wrenching and disgusting but altogether appropriate and necessary.

Get Cultured: Rome – A Local Guide to the Eternal City’s Ancient and Modern Pleasures

Above ground, just, and dotted around the city are more memorials, set into the sidewalk. There are currently around 4,000 Stoplersteine or ‘Stumbling Stones’, brass plaques that note a few details of the predominantly Jewish victims dragged away to concentration camps.

Of all the memorials to a dark history it is perhaps unsurprising that the most commoditized and commercialized is at the border of the former U.S. controlled territory, Checkpoint Charlie. In 1961, this was the scene of the most critical of moments in the Cold War. Amid rising tensions in the newly divided city and tighter regulation over border control, tanks from the Americans and the USSR faced off here for 16 hours without a shot being fired.

After this, Checkpoint C became a symbol of the Cold War and of Western resistance to the growing Soviet empire. Nowadays, you can have your photo taken with a mock-up guard, participate in a pretend persecution for trying to escape East Germany and buy endless amounts of merchandise, even a dubious piece of the wall itself. In 2010 a McDonald’s moved in just meters inside the former U.S. side. The transformation from political and historical landmark to tacky tourist trap was now complete.

When the city was re-established as the German capital in 1999, politicians and journalists moved into town and brought with them more stability for a fragile economy that relied so heavily on tourism. So it’s maybe no surprise that some developments – such as the Sony Centre not far from the main public park, Tiergarten – are built with visitors in mind. Tourism is still Berlin’s main source of income but new industries are starting to diversify the coffers.

Some of the largest media companies – RBB, MTV Europe and Deutsche Welle to name a few – have set up a home in the capital and new tech start-ups are popping up in different pockets around the city. California may not be losing its tech status anytime soon but the amount of start-ups that opened in Berlin last year was only bettered worldwide by Silicon Valley, New York and London. With companies like SoundCloud thriving and a talented workforce being offered cheaper rent, an English speaking culture and cheap flights – Berlin is jostling to become a major player in the innovative media industry once again.

And with service, education and financial sectors all growing in the city, Berlin’s economic status is starting to look healthier than ever before.

How it marries up the balance with maintaining history will be interesting to see.

This is the New Berlin, under construction.

Daniel is a freelance journalist based in London having worked for the Press Association, CNBC, Guerrilla Films, Knickerbockerglory TV and the Sport Review. Daniel continues working in the news space alongside working on longer form travel, culture and investigative pieces – including a film all about the coffee trade due out in early 2016. 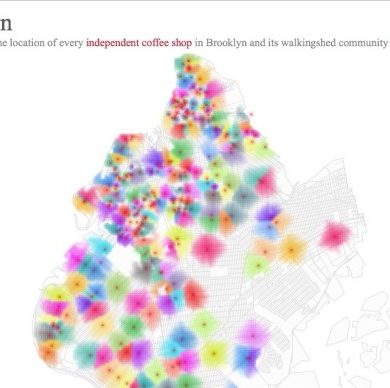