Pinterest: Turn Images of Your Brand Into an Idea and Sell It

If you’re a professional player in the game of social media you may already know that Pinterest is currently driving more traffic than Google+ and LinkedIn combined and beat Reddit as a referrer (GOOD). The social bookmarking site, which essentially allows people to create “pinboards” from which they can share links, “like,” and “repin” photos from one board to another, has captured the most loyal audience out there: women (58 percent) — more specifically, brides-to-be. 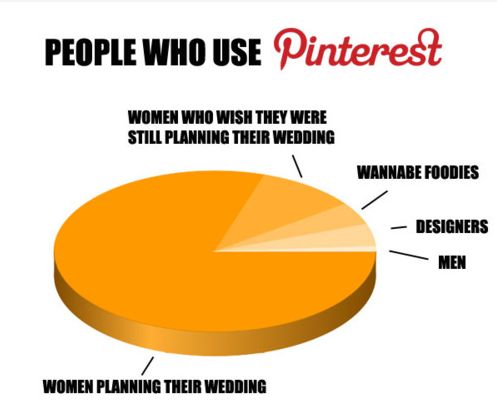 So the question is: Is Pinterest an effective platform for retailors and social media strategists trying to promote their brand or product? Currently, the statistics say no as web searching is still the primary source of traffic to the site. But that doesn’t mean it couldn’t be in the future. Between September 2011 and December 2011, traffic increased more than fourfold bringing in 7.51 million unique visitors in December alone (Mashable). So now may be a great time to jump on and test the waters if your brand appeals to the particular demographics the site has been attracting.

I recently became active on Pinterest when I was inspired by a friend’s pinboard, which was filled with non-cheesy inspirational quotes, and decided to share the link to her board entitled, “Learn Something New” on my Facebook page. Being female, I certainly fit the mold for who’s visiting the sight, and I must admit that after repinning some of her images, I spent a few more minutes perusing photos related to her upcoming wedding ““ so I guess you can say that I fell into category number two: “Women who wish they were still planning their weddings” (although I would never willingly admit that to friends and colleagues — it would be social suicide).

After signing off Pinterest, I asked myself this question: If it was a retailer’s board with insightful wedding images (ideas) would I have shared my findings with friends who were in the process of planning for a wedding? My answer was absolutely “yes” because I enjoy using social sharing platforms to send others interesting information. So if media sites/blogs and retailors promoting a specific brand can figure out how to present “Ideas” through their images, they may just be able to inspire their followers to share their product with a larger network of people. In the same way we view a sexy billboard, or the series of images which form a commercial, we would be able to click through photographs of our friend’s favorite dress from Anthropologie, a necklace from Satya, or perhaps a screenshot of the hotel where they plan to stay on their honeymoon.