Five Delicious Scandinavian Recipes that Remind me of My Childhood 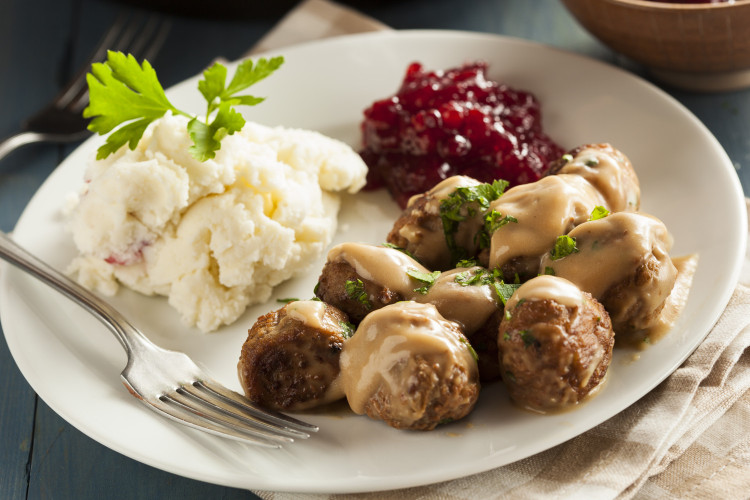 Not always the first thought on a food enthusiast’s mind (with maybe the exception of Noma), Denmark, Sweden and Norway often get out-shined by some of their European cousins when it comes to cuisine. Despite popular belief, Nordic fare is wonderfully diverse and consists of more than just fish. Growing up as the granddaughter of a Norwegian immigrant, I am familiar with the cuisine of Scandinavia. Some of my favorite memories are from my grandmother’s kitchen as we made dishes from her childhood. Even now, more than eleven years later, Scandinavian cuisine is my Achilles heel. From cakes to savory stews these recipes are the centerpiece of my childhood. Here are five of my favorites:

My grandmother is known for many of her recipes, and when it comes to a party she is bombarded with requests. The most popular is for her Swedish meatballs. Unlike the common recipe, my grandmother makes her meatballs in a lingon berry or cranberry sauce and serves her dish as an appetizer. The most traditional Swedish meatball meal is served with a beef cream sauce, with mash potatoes or egg noodles on the side. A lingon berry sauce is also a nice bitter addition that serves as a compliment to the meatballs. Hearty, bold, and traditional you’ll love making this dish at home.

In the United States puddings are a staple dessert. Chocolate, vanilla, tapioca or rice, Americans love the popular gelatin product. The closest relative in Scandinavian cuisine is Risgrynsgröt or, rice porridge. Growing up we called it rice pudding, despite the recipe’s lack of gelatin. My grandmother would make this desert around the holidays, although it can be classified as slightly savory or sweet. My family tops the dessert with a homemade strawberry sauce, but you can also add butter or cinnamon sugar.

Butter, maple syrup, jam or plain the Norwegian waffle is a buttery, sweet morning favorite that any food lover will enjoy. Most commonly made in a heart-shaped waffle iron, this breakfast food is fun and delicious. You can top it with any preferred topping, or simply have it plain and grab it to go. Over the years my family has claimed the Norwegian waffle as a breakfast favorite, often made each morning during our family reunions.

My personal favorite, the apple cake is a flakey, delicate cake my grandmother often made for social gatherings. The cake was a sure way to win over crowds of all ages with its wonderful balance of green apple slices and cinnamon brown sugar cake. Served best with a cup of coffee, this cake can be a desert or breakfast item, unlike our familiar American apple pie, which is popularly known as a desert. For a sweeter treat, enjoy a hearty slice of this traditional Scandinvian cake with a big scoop of carmel swirl ice cream or homemade whipped cream.

No matter the season, my grandmother often makes a beef stew called Lapskaus, which has chunks of fresh carrots (or other root vegetables), potatoes and beef in a broth of your choice. There are two versions – a light and a dark broth base. A hearty, warm dish, this is a great recipe that can be made for large groups of people. Also, this recipe is flexible and allows you to mix and match your favorite meats and vegetables.