Monsanto’s Seed: How One Company is Tarnishing Our Food Supply If you didn’t think that fear tactics and dishonest business practices could go without reprimand to the point where a multinational corporation has hired its own crony of shady private investigators to silence anyone who may get in the way of profits, think again. Once the producer of  hazardous products such as DDT, Agent Orange, aspartame and more recently the bovine growth hormone, Monsanto decided it was time to ‘spruce up’ its image and move into the business of agricultural biotechnology.

Unfortunately, the Goliath company has earned a far worse reputation in the seed industry for ripping apart the livelihoods of small farmers in the U.S., Canada and Europe and for patenting its seeds — which in the book of mankind has been considered a higher life form for millions of years.

I recently attended a screening of David vs. Goliath, a documentary which recounts the story of Canadian farmer, Percy Schmeiser who was sued by Monsanto after the company’s genetically modified Roundup Ready canola seed drifted onto the farmer’s land. Schmeiser, who had been a farmer for over 40 years, lost his crop and the seed  he spent years developing to be tolerant to local farming conditions. Schmeiser would never be able to use his seed again — a devastating blow to the septuagenarian farmer who spent most of his life trying to perfect his harvest.

Monsanto filed a lawsuit against Schmeiser claiming that he knowingly and illegally planted the company’s patented weed-resistant canola on his land. Monsanto demanded $37 for each hectare of Schmeiser’s land — land that was destroyed by a seed that belonged to Monsanto.

This lawsuit was just one of hundreds that Monsanto has filed against small farmers in the U.S. and Canada. But its not just the legal battles that have devastated farmers. Monsanto is notorious for sending Mafia-like ‘investigators’ who use strong-arm tactics to scare farmers into giving into to the giant’s requests. Throughout the documentary, Schmeiser talks about the fear he and his wife lived with while Monsanto continuously stalked his home, surreptitiously surveyed his property, and followed his whereabouts throughout the day.

The most unnerving part of the whole story is that in most cases the courts have ruled in favor of Monsanto because of the company’s patent on the seeds. Schmeiser was lucky — after an almost seven-year battle the Supreme Court ruled that Monsanto’s patent is valid, but Schmeiser would not be forced to pay Monsanto anything as he did not profit from the presence of Roundup Ready canola in his fields.

It is believed that over three-fourths of Canada’s corn supply has been tarnished with GMOs. In the meantime, Monsanto is coming up with more ways to dominate the agriculture sector, as it looks into creating GMO seeds for wheat and other high-profiting crops. At this point, scientists have no way of telling the effects of eating a genetically modified organism that has been sprayed profusely with hazardous herbicides. ( According to the documentary, when Roundup was first pitched to the U.S. government, Monsanto claimed the herbicide was so safe you could drink it. Research later found that it contains toxic chemicals.)

5 Nonprofits that Made the ‘C’ in Cool Charitable

Unfortunately, the only way we will ever see the demise of Monsanto is if consumers actively boycott foods containing GMOs. The problem is that most products are not honestly labeled and, at this point, it’s probably safe to say that if it’s not labeled “organic” any products containing corn or soybeans (and that’s corn or soy anything — syrup, grain-fed animals, high-fructose, etc.) will have traces of GMOs. And with Whole Foods dominating the “natural foods” market, prices on organic products continue to soar. It’s a dilemma, but it’s our food supply, and maybe that is something worth sacrificing for. 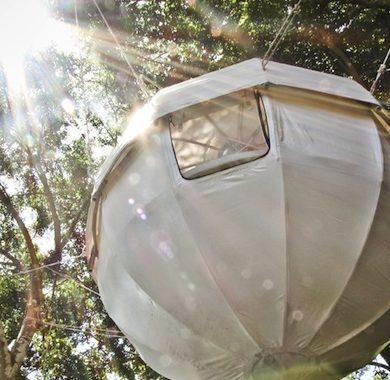